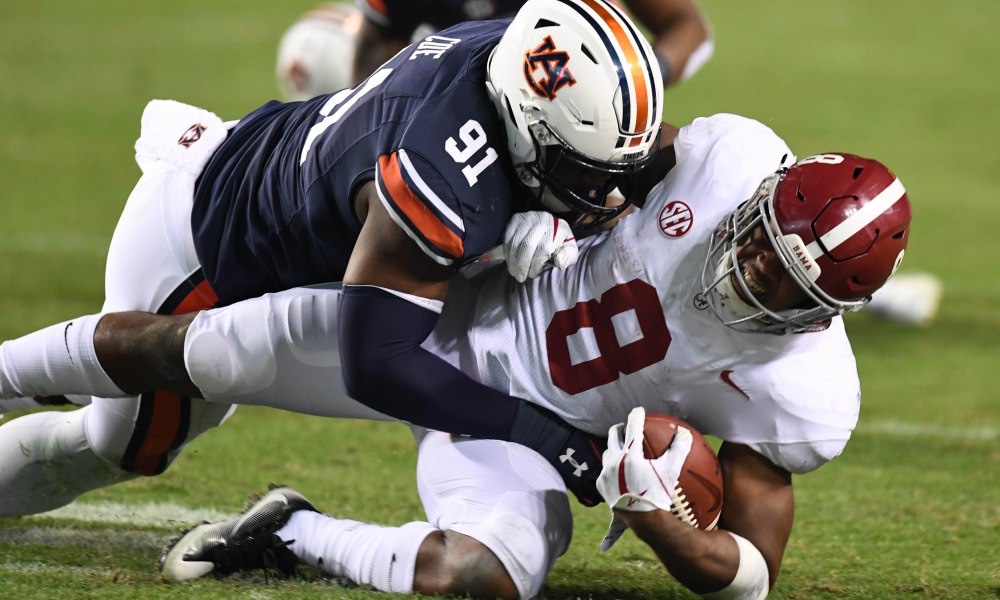 Here are some thoughts on the players they signed.

Rashod Berry, TE, Ohio State: Berry is your classic U tight end who can block on the backside or used as a move tight end to lead block or kick out. He is going to have to contribute on special teams to make the team. Berry has also played defensive end so a position switch is possible.

Myles Bryant, CB, Washington: Bryant is small. He will have to play inside as a nickel or dime corner. Has kick returner potential so that adds value to him being on the roster.

Nick Coe, DE, Auburn: Coe going undrafted is a bit of a surprise. I mocked him to the Patriots several times on my daily mock drafts. He is long, explosive and strong. He can anchor down and control a gap against the run. Coe can get after the quarterback as well. He will have a good shot at making the team.

De’Jon Harris, ILB, Arkansas: Harris is ideally suited to play the MIKE linebacker. He is a physical presence in the box. He reads, recognizes quickly and gets downhill and finishes on contact. Harris can make the Patriots as a back up linebacker and special teamer.

Will Hastings, WR, Auburn: A converted kicker who had a good season in 2017 catching 26 passes for 525 yards and four touchdowns. Hastings missed the 2018 season with a knee injury. When healthy, Hastings is a vertical threat out of the slot. He runs good routes and can separate vertically. He had developed a rapport with Stidham at Auburn.

Bill Murray, DT, William and Mary: Laugh at the name and mustache all you want but Murray was a really good player at William & Mary. He racked up 10 blocks, 19.0 sacks, 32.0 TFL, 143 tackles, four forced fumbles and two fumble recoveries in his career. Murray has length and he is disruptive inside. He has strong hands and can control blockers at point of attack. Murray has a good chance of making the team given the team’s lack of depth at the position.

Sean Riley, WR, Syracuse: Riley caught 119 passes and scored four touchdowns during his career. Most of that production came in 2018 when he caught 64 passes for 756 yards and three touchdowns. Riley is a quick twitch route runner who uses his entire frame to get a quick release at the line. He gets in and out of cuts with ease and has a second gear in the open field. Riley was a terrific return man at Syracuse. He had a kick return average of 21.2 yards and a punt return average of 11.3.

J’Mar Smith, QB, Louisiana Tech: At 6-0 228, Smith has good size and can make plays in and out of the pocket. Smith shows good arm strength and can make throws consistently in all three levels. Smith threw for 2,977 yards and 18 touchdown passes last season. For his career, he threw 51 touchdown passes and rushed for 15 more. There is speculation the Patriots may move Smith to receiver but for now, expect him to stay at quarterback.

J.J Taylor, RB, Arizona: Taylor was a high LLC productive back at Arizona rushing 3,263 yards and 18 touchdowns during his career. Small and shifty, he runs with a low pad level and can make cuts with ease in the open field. He has good hands and a feel for screens and route running. Taylor is ideally suited to be a sub package back who can run against nickel and dime fronts. Taylor reminds me of Dion Lewis.

Kyahva Tezino, ILB, San Diego St: Tezino moves well laterally and does a good job of reading his keys, finding the ball and gets downhill. At 6-0 235, Tezino is more suited to play MIKE inside but could also play SAM or WILL. He has a good feel for some coverage and recognizing crossing routes and covering them. Tezino struggles carrying routes vertically so he may have to play inside. Good special teams potential.

Courtney Wallace, DT, Louisiana Tech: Wallace has good size at 6-2 305. He is a quick twitch tackle who gets good vertical movement on the snap. He can be a disruptive player who is best suited to play the three technique in the 4-3.

Isaiah Zuber, WR, Mississippi State: Zuber transferred from Kansas State to Mississippi State prior time last season. At K-State, he caught 127 passes for 1,321 yards and 11 touchdowns. He didn’t quite match that production last season catching 14 passes and scoring two touchdowns. Zuber has good size at 6-0 190. He is a solid route runner who gets in and out of cuts with ease and can separate at the top of his route.

Trevon Hill, DE, Miami (Fla): Hill transferred from Virginia Tech after being dismissed from the team. He developed at Miami last season and offers versatility as either a five technique defensive end or as an outside linebacker. He has good explosion on the snap and has shown the ability to bend and close quickly on the quarterback.

Jeff Thomas, WR, Miami (Fla): Thomas is an intriguing prospect because of his speed and route running. He can operate out of the slot and also play as a motion flanker. He has had some discipline issues at Miami but there is no denying he can make an impact, especially on special teams.

Jake Burt, TE, Boston College: The Patriots gave Burt $80,000 to sign which tells you they really like him and then he can make the team. Burt is your classic U tight end. He block in line on the back side or be moved around and used as a lead blocker. Burt runs clean routes underneath and can has a feel for zone coverage and settling. The Patriots could conceivably go with three rookie tight ends in Devin Asiasi, Dalton Keene and Burt.

Brian Lewerke, QB, Michigan State: Lewerke is an intriguing prospect. He has plus arm strength and is a good athlete. The thing that hurt him and ultimately knocked out of the draft was inconsistency. He had a tremendous season in 2017 but regressed after that.

Don’t hold your breath if you’re hoping for the next Tom Brady here folks. At best, Lewerke profiles as a long term back up.