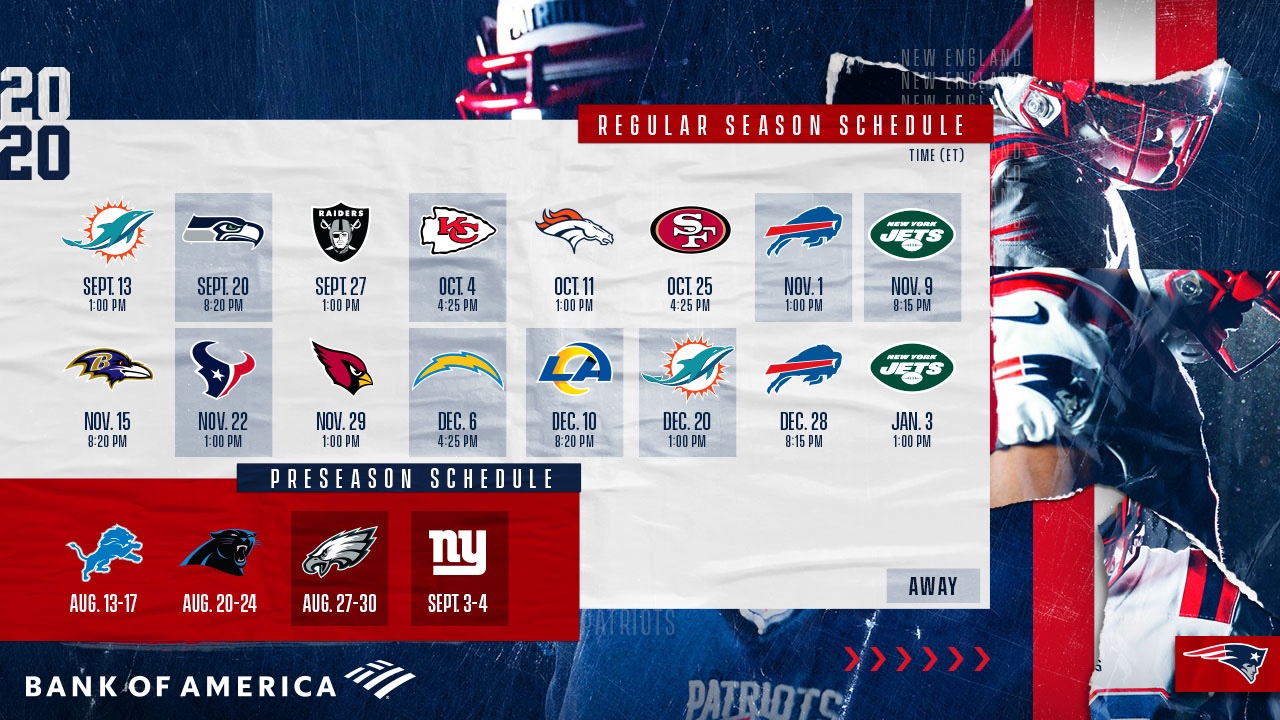 The Patriots 2020 schedule has been unveiled and it is a bear. The Patriots have the toughest schedule in the NFL. When you look at their schedule, it is best to break down in four game increments. That will help you better evaluate how the Patriots could fare in 2020. Here is my breakdown of the Patriots schedule and how they will finish.

Miami Dolphins (H), @ Seattle Seahawks, Las Vegas Raiders (H), @ Kansas City Chiefs: When I look at the first quarter of the Patriots schedule, it is going to be tough to get off to a good start. The Patriots host old friend Brian Flores and the Dolphins week one. Miami is much improved and they will be confident after winning in Foxboro to close out the 2019 season.

The Patriots travel to Seattle week two to take on the Seahawks on Sunday Night Football. If fans are allowed in stadiums, this will be a tough game for Jarrett Stidham (assuming he is the starter). The 12’s will impact this game. How the Patriots handle the crowd and adjust will be key. Containing Russell Wilson and limiting Seattle’s ability to make big plays will also be important.

The Patriots return home to face Jon Gruden and the Las Vegas Raiders in Week 3. The Raiders will be better and with the move to Vegas, the expectations are high for them. This will be a tough game but a winnable game for the Patriots.

Week four, the Patriots travel to Kansas City for a rematch of the 2018 AFC Championship game. Arrowhead is arguably the toughest place to play in the NFL. This will be a tough game for the Patriots to win. The defending Super Bowl champion Chiefs return the majority of their roster and they will once again be the team to beat in the AFC.

Drew Lock and the Broncos visit Foxboro in Week 5. On paper, Denver is much improved. They added receivers Jerry Jeudy and K.J Hamler in the draft and signed running back Melvin Gordon in free agency. Denver’s high octane offense will score points so this game could be a shootout.

Week 6: Bye week: Early bye week but that might not be bad because it could give the Patriots a chance to “reset” if they get off to a tough start.

The 49ers come to town in Week 7. It will be the first time Jimmy Garoppolo takes on his former team and the man who traded him, Bill Belichick. On paper, this will be a tough match up for the Patriots. San Francisco is big, physical and can dominate the line of scrimmage on both sides of the ball. From a talent standpoint, San Francisco is the superior team. This will be a tough game for the Patriots to win.

Week nine the Patriots travel to New York to battle the Jets on Monday Night Football. The Patriots humiliated the Jets last season on MNF in the infamous Sam Darnold “seeing ghosts” game. This game could be a little different this time around however.

Conversely, the Patriots will look to avenge their first loss of last season when the Ravens visit Gillette Stadium in Week 10. Baltimore ran through the Patriots in convincing win at home last season that propelled them to the number one seed in the AFC. Baltimore could be even better this season so this looks like another tough home game for Belichick and company.

Week 11 features a visit to Houston, site of one of the worst performance of last season for the Patriots. It is always a close game when these two teams meet and I wouldn’t expect anything different this upcoming season. Both teams have overhauled their rosters and this game could have early division and playoff implications for both teams.

Kyler Murray and the Cardinals descend upon Foxboro in Week 12. In the past, this would have been a “winnable” game but not anymore. The Cardinals added DeAndre Hopkins this off-season and drafted linebacker Isaiah Simmons. They have a talented roster and expect to contend for a playoff spot. Another game that could end up a shootout.

I am going to clump the Los Angeles games together as the Patriots will spend a week and a half in Los Angeles playing the Chargers and Rams in back to back weeks. I find this scheduling interesting yet sensible. Both the Chargers and Rams are playoff contenders in theory but also have a fair amount of question marks heading into the season. In many ways, these two games could determine whether or not the Patriots make the playoffs.

After three weeks on the road, the Patriots return home on December 28th to take on the Buffalo Bills on Monday Night Football. If the Patriots somehow survive this brutal schedule and stay in playoff contention, this game could determine who wins the division and secures a possible playoff spot.

The Patriots wrap up the 2020 season with a home game against the Jets. This could be a ticket give away game assuming fans will be attending games. The Patriots will either be sitting starters because they made the playoffs or this will be a meaningless regular season finally and people will give away their tickets.

Projected Record: 9-7: Schedule aside. If the Patriots stay healthy, play good defense, run the football and Jarrett Stidham plays well (assuming he’s the starter), they could contend for a playoff spot. I don’t envision a Super Bowl run but there is still enough talent on hand to be competitive. I think double digit wins will be a tall order however.