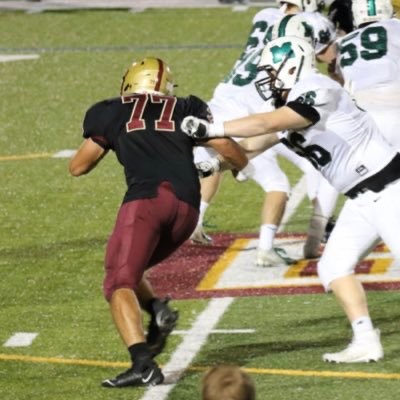 100% committed!!! Thanks to everyone who helped me along the way. pic.twitter.com/rAcnJnj1xz

Russell had offers from Wake Forest, Boston College, Rutgers, UConn, Harvard, UMass, Brown, Dartmouth and Albany. UMass and Dartmouth offered Russell at the end of last year but a flurry of offers last month put him on the map as a top recruit in the area.

At 6-7 255, Russell is an athletic big man with good feet and the ability to climb to the second level, locate a defender and cover him up. He plays tall and will need to work on playing with better bend but you see how strong he is at the point of attack.

Russell has the frame to keep adding weight. He could easily add another 50 pounds to his frame in the next three years and be a starter by his junior year if not before that.

Russell is a terrific long term prospect and a tremendous pick up for Dave Clawson and his staff.