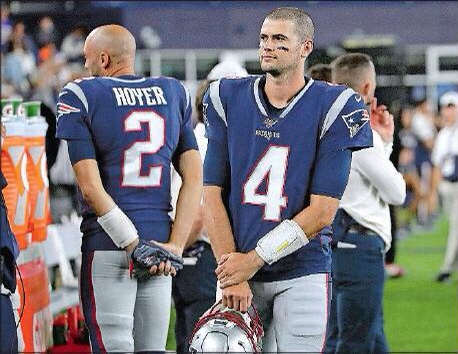 It was reported last week that Jarrett Stidham had been organizing throwing workouts with some of his teammates. Then, we began hearing that Brian Hoyer was there too, just incase anyone was worried.

Discussion on local sports radio on Friday and over the weekend soon turned to whether or not Hoyer was really the one organizing the workouts and just being a good “quarterback caddie” (credit Chris Gasper for that absolute perfect gem) helping Stidham with new leadership responsibilities he is now burdened with after Brady left.

At this point, I think it only matters if Stidham’s teammates see these glorified captains’ practices and believe it’s a facade. If they think it’s him trying to do the right thing, but only because Hoyer told him to do so, then it’s a problem. If he is genuinely calling teammates and setting things up on his own, then I think it’s important to highlight the early leadership tendencies, the ones Brady had for many years here then lost (or willingly gave up) during his path out of New England

For those of us that hope Stidham is the guy this season, then the credit being given to him for organizing these is important. I don’t think you can underestimate the importance of the Patriots putting a positive spin on his career as early as possible. If he’s already jumping at the opportunity to get better with his receivers, then why not make sure people hear about it and give the kid a little confidence boost? Plus, it’s a chance to give a subtle shot at Brady saying “look, the kid’s doing what Tom did in the early part of his career too.”

On the flip side of that, if Stidham just called some guys with the intent of throwing some half-assed, haphazard workouts together after Hoyer gave him a shout and told him that it’d probably be a good idea, well then I think there’s two issues that can come out of that scenario.

First, Brian Hoyer may not be very good, but you don’t stay in the NFL for as long as he has without having some competitiveness inside you. Perhaps Hoyer’s potential nudge of Stidham to get out on a field was simply a way of Hoyer measuring up his competition before camp.

Sure, Hoyer saw Stidham up close and personal last offseason when the kid took his job, but if Hoyer is able to see a weakness here or there before camp starts, it’s pretty obvious that he at least has the respect and ear of Bill Belichick since he’s been brought back so easily over the past few years, and maybe Hoyer can plant a seed of doubt in The Hoodie’s mind whether or not Stidham is ready to take the job.

Now if you don’t believe my cynical Brain Hoyer theory is possible, then what about the optics of a kid who has the opportunity to take over the starting quarterback job for the best organization in pro football but not taking the bull by the horns on his own? If these workouts were really a product of Hoyer’, does Stidham have the true leadership qualities you need in a quarterback?

For the record, I genuinely believe Stidham has been the one organizing these throwing sessions and I do believe he has both the talent and the leadership abilities to be the guy here in New England as Iv’e written about before on this site.

However, if Brian Hoyer was really the mastermind behind these workouts, well then I think the chance of him starting this season is frighteningly high. I also worry that Bill may have to dip back into the draft for a QB if Stidham isn’t showing the characteristics needed, even though there’s no chance in hell they’ll be a bottom of the barrel team with a chance at a truly franchise-altering player.