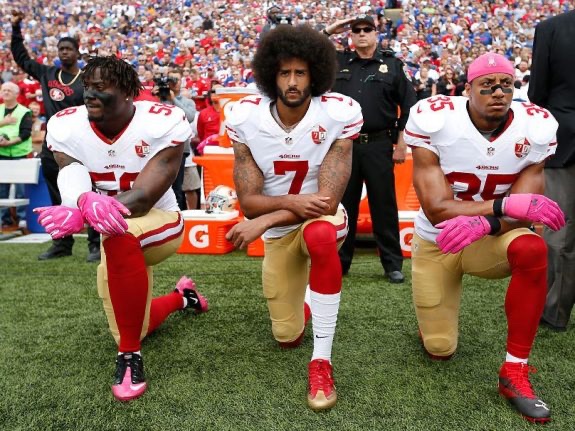 I want to start off by saying that the purpose of this piece is not to get political. I am not trying to make a political statement here. I am simply looking at this from a football perspective.

The Patriots should not sign Colin Kaepernick. The idea has been floated around these parts in recent days by both politicians and the media alike but it is a foolish idea.

Why is it foolish you might say? Simple. Kaepernick has not played in an NFL regular season game since 2016. He played in 12 games that season and started 11 of them. He completed 59% of his passes, throwing for 2,241 yards, 16 touchdown passes and 4 interceptions. Statistically, that is a good season when you break down the numbers. The issue is, it was four years ago.

Kaepernick has a unique skill set physically. No one doubts that. He has plus arm strength and can make every throw in the book. In his prime, he was a tremendous athlete and there is no doubt he probably still is a good athlete.

The issue is he hasn’t played in a meaningful game in four years. That matters. If you think after a four year layoff that he can just trot onto a football field and make an instant impact playing the toughest position in sports, you are out of your mind. He cannot.

Kaepernick will need time to get back into football playing shape. Not only that, but at this point in his career, he may not be anything note than a back up given that there aren’t too many situations around the league where he can compete for a starting job.

When it comes to the Patriots, the other thing that needs to be taken into consideration is system fit. I know what you are thinking. Here we go again with the system thing. It is true. I don’t think he would be a great system fit here.

The Patriots passing game relies heavily on short and intermediate throws. Timing and accuracy are important. Kaepernick can make the throws in the Patriots offense but he will need time to learn the sight and route adjustments. That is perhaps the most complicated part of the Patriots offense.

The one thing Kaepernick has done well in his career is take care of the football. He did throw ten interceptions in 2014 but he is smart with the ball and doesn’t force throws that aren’t there. From that standpoint, he would be a good fit for Bill Belichick and what he values the most from his quarterbacks. Ball security.

Is it out of the realm of possibility that the Patriots sign Kaepernick? No. They have signed players that come with some history in the past. Antonio Brown is the most recent example. The biggest difference with Kaepernick is, he hasn’t had off field issues. If the Patriots were to sign him, they have to be fully prepared for the media circus that would ensue. In many ways, it would be more like the Tim Tebow signing than any other signing in the Belichick era.

Despite that, the Patriots are not going to sign Colin Kaepernick because some member of the media thinks they should or Joe Kennedy III thinks they should. If they signed him, it is because they still think he can play.

Given the fact that the Patriots currently have four quarterbacks on their roster (Jarrett Stidham, Brian Hoyer, Brian Lewerke and J’Mar Smith) I don’t see them signing Kaepernick.

Bottom line. Kaepernick has been out of football for four years, he is a questionable system fit and he will accompanied by a media circus for his political views. In Belichick’s eyes, the risk outweighs the reward. Belichick would want to move forward with the players currently on his roster.

Like it or not, that is how he has always operated and after last season’s debacle with Brown, I don’t see him wanting to bring in another polarizing figure to New England.