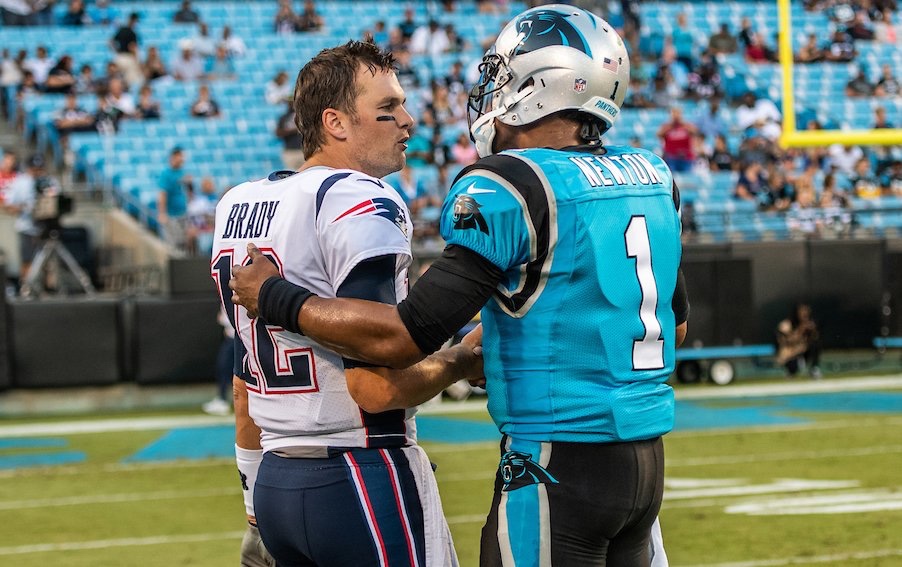 Well, here we are.

After months of questioning whether or not the NFL would truly be able to plow ahead like they thought they could, training camps are set to pick up steam this week. There’s still quite a bit of uncertainty as to how the regular season may look, but at the very least we should have some actual football topics to discuss starting soon.

The most watched group of people in all of New England – the quarterbacks – are supposed to report Monday. This could easily be the most interesting camp/preseason period since 2009 when Brady was returning from his ACL injury or the yer Brady was forced to miss four games due to Deflategate.

With that being said, here’s a few final thoughts I’ve had prior to the NFL pushing ahead towards the oddest season in league history:

WHAT IF BRADY ACTUALLY SUCKS IN TAMPA?

All we’ve heard and admittedly all I’ve really thought about is how good the Bucs offense is going to be this year. But, what if it’s not?

Will Brady lose patience with Godwin and Evans as quickly as he did with Harry and the other young guys? What if Gronk isn’t the same guy? Does he quickly get frustrated and start to doubt his ability to perform as well as he once could? Does Bruce Arians end up getting frustrated with what Tom wants to do and forcibly put his own stuff back in the playbook after trying it Tom’s way?

There are actually a lot more questions with the Bucs this year than people are talking about. If the Tampa offense doesn’t click that defense probably isn’t good enough just yet to win them games on its own. Brady’s legacy will never take a true hit, but struggles in Tampa with all the talent he now has around him will surely make people look a bit cock-eyed at the GOAT.

DOES STIDHAM HAVE ANY CHANCE TO BEAT OUT CAM?

No. Unless Cam’s legs or arms fall off, he is obviously a superior talent to Stidham. I still believe that the Auburn connection for the two of them could be a bit underplayed. If there’s anything that’s going to motivate Stidham (aside from being the starter of the best team in NFL history, it shouldn’t take more than that, but if it does…) it’s a quarterback from his alma mater pushing him for his job.

Cam has seemed like a man on a mission in all his hype videos, and while those are just that – hype – and nothing more, it’s still worth noting that a man in his position really can’t afford to be beat out by a second-year QB. Newton has millions in his next contract riding on this season. He’s probably gong to have to pump the breaks on his Instagram posts, but even if he doesn’t, I think Bill is hell bent on winning without TB12 this year no matter what it takes, even if it means letting Cam be Cam on social media.

SHOULD THE SEASON BE DELAYED?

Probably, but it won’t be. The NFL has clearly shown throughout this pandemic – starting with the draft – that they are going to carry on with business as usual. The amount of TV money involved is obviously outrageous and will have more to do with these decisions than they probably should, but it is what it is.

People worried about sports returning need to understand that there will be positive tests no matter how many preventative measures are taken in just about any profession at this point. There’s just too many unknowns to fully prevent that. The key with a league this large and with guys in closer contact with each other than maybe any other sport is the way positive tests are dealt with. I believe the season can go on uninterrupted as long as the NFL protocols aren’t half assed. That’s big if considering how long it took them to discuss proper training camp protocols with players, but there is just far too much money involved for them to screw this one up.

A mid-season shut down would be worst case scenario which is why I think delaying it a week or two to make sure EVERY SINGLE BASE is covered would be smart, but it appears as if that’s not the case.

Those are just a few lingering thoughts I had as we continue to navigate covering sports in the middle of these mind-boggling times. Of course there are more questions than answers with everything in life right now, but for football in particular the questions are plentiful. Still, the true start of camps this week signal that we may be returning to just a bit more of normalcy as we slowly chip away as a society – even if nothing about the game on Sundays looks normal come September.