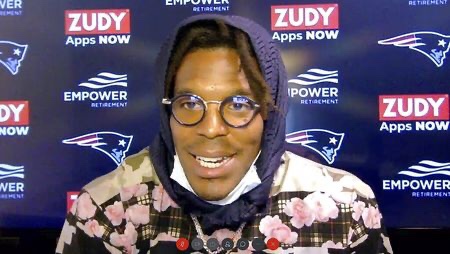 Before heading into this weekend all three Patriots quarterbacks met with the media via Zoom on Friday afternoon.

Cam Newton was of course the biggest point of interest of the three, and his “press conference” may have been an even bigger example of how things are changing over at Gillette. While Newton didn’t give any national secrets away he was far more engaging on some questions than you’d expect for a Patriots quarterback.

Here are some of the highlights from his first rondevu with the New England media:

Newton wasn’t sure exactly when he began talking with the Pats about a deal, but things came together rather nicely almost right away in terms of building a relationship.

“I really can’t remember,” he said. “But, I was just blown away by just the whole overall professionalism of the Patriots organization starting with Robert Kraft, with coach Belichick, as well as eventually speaking with coach Josh (McDaniels). I do know I was in L.A. and it kind of caught me by surprise, but at the same time I enjoyed this whole process.”

THE WORKING RELATIONSHIP WITH BILL BELICHICK

Everyone had many of the same thoughts when the news first hit that Newton had signed, but perhaps the most important question on everyone’s mind was how are Bill and Cam going to mesh? According to Newton it’s more of an outside issue than an inside issue.

“Listen, there’s a lot of things that I’ll just say that there’s a perception,” he said with a grin. “But, at the end of the day, it’s still football. I’ve loved it ever since I’ve been here.

“You know you hear rumors about certain things, but once you finally get settled in on things that really matter it’s just all about finding a way to prove your worth on a team.”

THE MINDSET OF BEING IN A QUARTERBACK COMPETITION

Cam said all the right things when he was asked what the last time he truly felt like he had to compete for starting QB job was.

DOES THE ENDING IN CAROLINA MOTIVATE HIM?

It was an ugly end to a lengthy career in Carolina for Newton, but he seems to be a pretty good self motivator. It’s impossible to think he won’t use the Panthers moving on from him as motivation, but it seems like it won’t take much to get Newton out of bed this season.

“Look, I wake up mad,” he said. “The fact I’m not able to see my kids on a regular basis, that’s what makes me mad. At the end of the day I’m not going to dwell on the past. I’m a person that’s a self motivator and even though the past is the past I’m not going to keep looking back. For me it’s just turn the page and move forward, I wish those guys nothing but the best.”

IF HE HAS TO PROVE ANYTHING THIS YEAR

Between the injuries and having to wait as long as he did for a contract there’s a lot of reasons to think Newton has something to prove this year, but he feels differently.

“I don’t have to prove nothing,” he said boldly. “At the end of the day – especially not to nobody – now I have to prove it to myself, that’s a daily challenge. I don’t think anybody’s daily expectation will ever surpass my expectations for myself. I’m just looking forward to a challenge. Knowing that picking up this whole system – not only the philosophical way of the offense but also how things are ran – this is a new team. I’ve only been in geared toward one particular team and one particular city, but now moving to a whole other residence, it’s put the onus on trying to adapt and that’s something that’s been the rather interesting part.”

We’ve all seen the “hype” videos and the workout videos Newton has put out with guys like Sanu and Edelman, but what’s his impression of them been?

“Rather interesting,” Cam said holding back a laugh. “Just to kind of see how their movements are from in and out of cuts, in and out of breaks and to now kind of break the ice I wanted to kind of get a head start on getting to know those teammates, but there’s still a lot more teammates I need to get to know as well.”

This is going to be the most important relationship in the building this year if the Pats are going to have any success, and so far so good.

“The whole process so far has been amazing,” Newton said. “Just to be around these guys and trying to understand as much as possible.

“The first time I called (Josh)  we were excited just to be on the phone with each other, then all of a sudden he just said “hey bro, this (expletive) is calculus!” “He said it and it was just funny. From that whole 15-minute conversation that’s the only thing that I just remember. This (expletive) is calculus. But at the end of the day football is still just football and you know you just can’t make too much of it than it already is. Josh has been there every step of the way as has coach Belichick and we’ve just been hammering away. All the quarterbacks have been trying to learn this system for what it’s worth and we’ve been assisting each other on that as well.”

Usually at Gillette answering injury questions is like committing a crime, but Cam was short and to the point when asked about where he stood medically and if he might need any “maintenance days” during the year.

“At this particular point in time I’m a full go,” Newton said sternly.

Newton admitted it still hasn’t really sunk in that he’s a quarterback on the New England Patriots roster.

“I’m still constantly – I don’t want to say disbelief at this particular point in time – but it’s just a surreal moment,” he said. “Nobody really knows how excited I am just to be apart of this organization in many (more) ways than one. Just following up such a powerful dynasty that is enriched in so much prestige and lineage of so much success. For me, a lot of people would hide from the notion to do certain things, but for me it’s something I wake up pinching myself each and every day and it’s so surreal.

“Coming down 1 Patriot Place each and every day and seeing the whole ambiance, not only that but seeing so much support around the city of Boston and Foxborough it’s just such a great environment for not only myself but other players included. It’s just crazy, I found myself putting on shirts that’s like “oh my god”, I don’t know when that moment is going to be (of reality) but I’m just going to keep doing what I’m supposed to do while I’m a member of the Patriots so that someday it will click that this is the norm.”