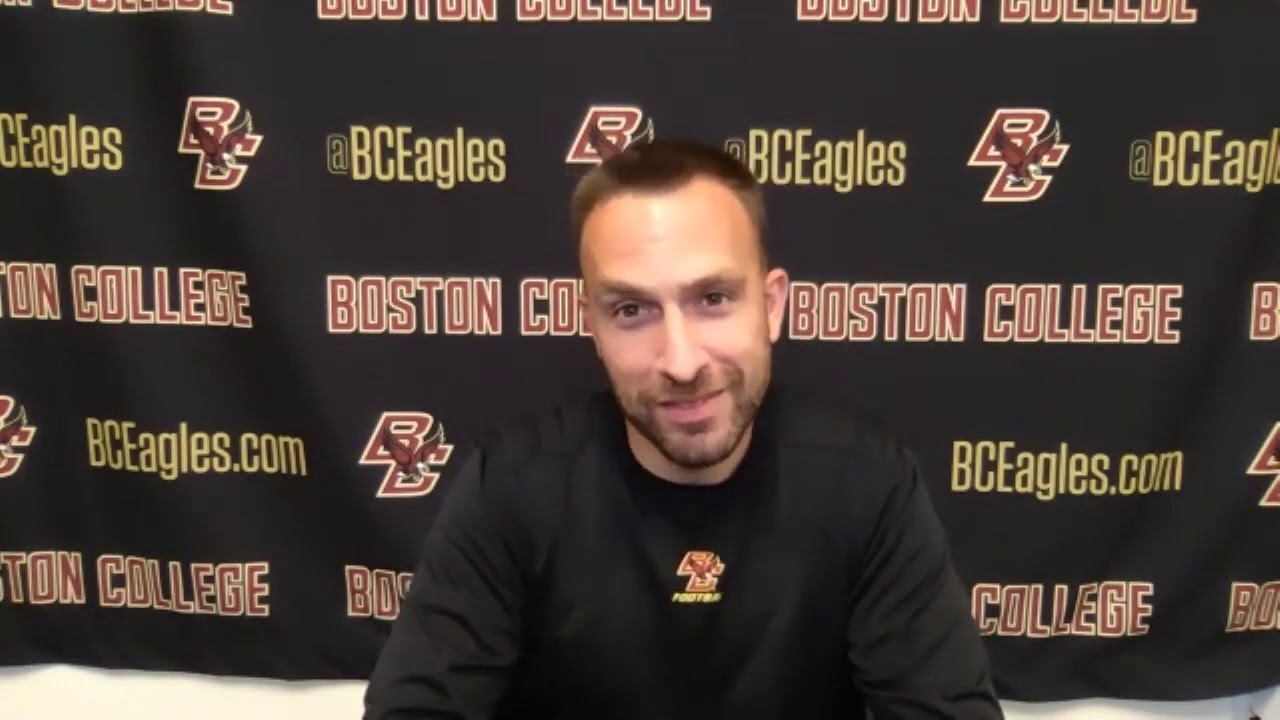 The college football world seems to have crumbled or is in the process of crumbling, but you wouldn’t know anything is wrong over in Chestnut Hill.

After an outrageous 48-hour Twitter storm that has seen the end of the college football world as we know it come about, the Eagles are continuing to operate like it’s business as usual. After what was their hardest practice to date on Monday morning, head coach Jeff Hafley and quarterbacks Matt Valecce, Dennis Grosel and Phil Jurkovec all spoke as well.

Before taking questions coach Hafley started with an update on his team.

“Before we start, again just want to thank our trainers and doctors and players,” he said. “We had 164 tests over the weekend and we had 164 negative tests in. So, I think that everyone wants to keep talking about do we want to play, do the kids want to play? Well, right now all we can really do is rely on our medical people and our players to do the best they can. So, 164 tests again and not a single positive, so I just really appreciate the team, their effort and the doctors and the trainers.”

Hafley was of course asked about the rumors that exploded over the weekend after the MAC had called off its season and that the BIG 10 was considering the same.

“I don’t know, we went out and practice today, after this (media session) we’re going to have a meeting and keep controlling what we can control,” Hafley said. “What is that? It’s what I just talked about. It’s listening to the doctors and our medial staff and make sure we’re doing everything the right way which our players are, and staying healthy and trying to be the best football team we can be. That’s completely out of our hands and I can’t waste time thinking about it.”

Hafley was also asked about the #WeWantToPlay Twitter movement from hundreds of college players at Power 5 schools that blew up over the weekend.

“No, I didn’t address it,” said Hafley. “I didn’t feel it was necessary. Our players feel safe and our players want to play. To me, my job is to coach them the best that I can for as long as I can and make them feel as safe as they can.”

A video popped up on social media this weekend of head strength coach Phil Matusz “mic’d up”. In the video his energy and enthusiasm is infectious as he chirps anyone within ear shot, so I asked coach Hafley how important that positive attitude from the whole staff is, especially during such uncertain times.

“Well, we need to follow him when he’s not mic’d up to see if he’ll still put on a show for people,” Hafley joked. “I think you have to be positive at all times. That’s going to be my style, that’s going to be the style of the staff, whether or not we’re in a Covid world or a normal world again. We’re not going to be a group that’s negative, yelling, that’s not us.

One of the more interesting things to come from the quarterbacks following coach Hafley was Grosel’s take on being a veteran leader for the rest of the QB room.

“One of the biggest things is being respected, and it was an honor to lead the guys out of the tunnel on Saturdays last year,” Grosel said. “Coming into the locker room this spring with a lot of those older guys gone is a different feeling. So, I felt a little more personally responsible with taking the lead with a new coach and a new offense, just trying to be that middle man for coach Hafley or coach Cignetti in whatever they need from me. Just trying to be as open and flexible as possible for those guys.”

As for the man of the hour of the past week or so, Jurkovec admitted that he was frustrated with the waiver process but thrilled that it worked out.

“I’ve got to give some people on Twitter – BC DEE – a lot of people on Twitter some credit,” he said when asked if he ever expected to go viral after the #FreeJurk movement. “A lot of kids were helping that out. I was frustrated with the process, expecting an answer, waiting for months, so there was a little bit of frustration. I was glad that people were on my side though. In the end they ruled for me and I’m grateful for that.”

While the rest of the country holds its breath waiting to see what the fate of the 2020 NCAA season will be, the Eagles, coach Hafley and his staff are simply going about business as usual. It was evident in the tone and tenor of everyone’s voice on Monday.

It’s cliche, but Boston College is truly just trying to control what they can control right now, and if there is a football season – whatever it looks like – they will be better off for it.