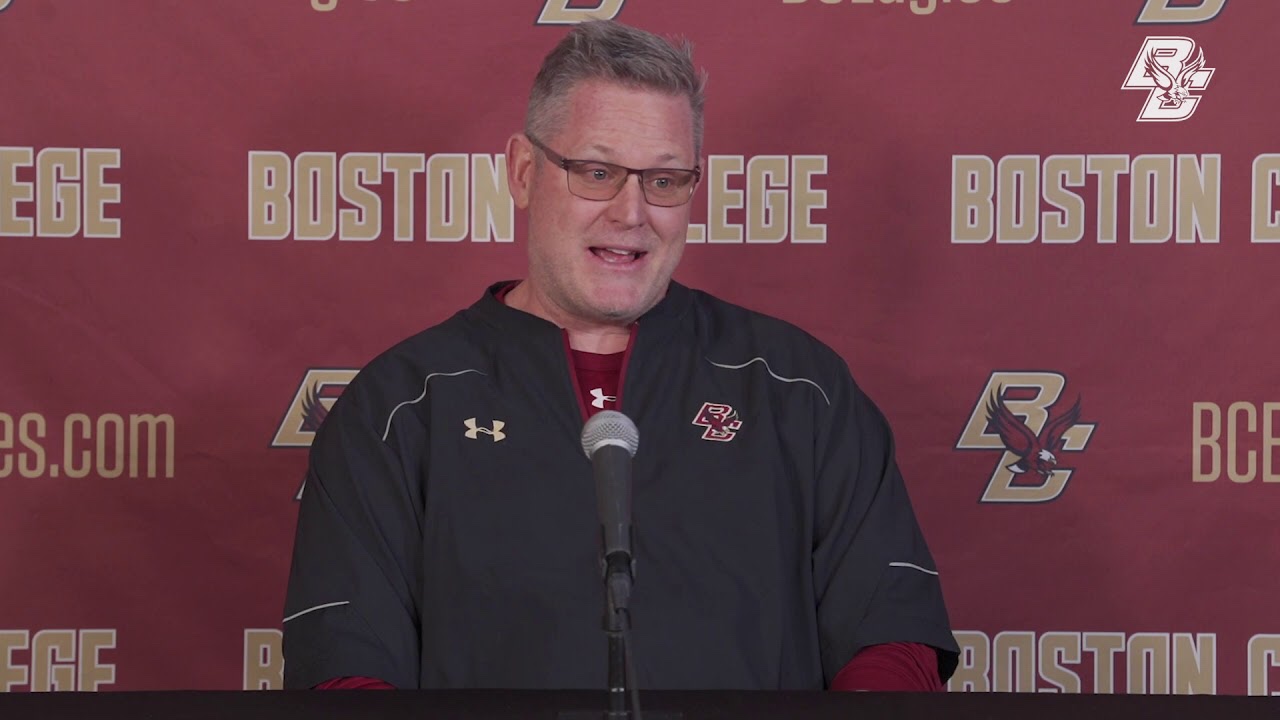 New Boston College offensive coordinator and quarterback coach Frank Cignetti Jr. has worked with quite a bit of elite talent in the game of football.

Cignetti has worked with Aaron Rodgers, Eli Manning, Sam Bradford, Todd Gurley, Dion Lewis, Jahvid Best and many others. He has coached in NFL playoff games and important college games. If anyone knows how to get the most out of the talent he has to work with, it’s Cignetti.

Instead of coach Hafley meeting the media on Wednesday morning after practice it was Cignetti. It was interesting to hear how Cignetti plans on using some of his weapons. The Eagles have speed all over the field in Zay Flowers, Kobay White, Jaelen Gill, David Bailey and Travis Levy. Those are just the names people recognize along with quarterbacks Dennis Grosel, Matt Valecce and Phil Jurkovec, but there are plenty of young guys pushing the veterans for playing time as well.

With so much talent and speed at his disposal, Cignetti is excited to see what this offense becomes.

“All the permitter players, we’re going to make sure we put them in the best position to be successful,” Cignetti said. “The system is built that way so the guys learn the concepts and where they fit with them whether it’s wide receivers, tight ends or running backs.”

Cignetti also talked about the difficulties of installing a new offense in such an odd time, and how important it is to have a good staff around to make that job easier.

“Coach Hafley has put together a really good offensive staff,” he said. “Not only myself, but when you look around at the staff we’ve hired there’s guys that have been offensive coordinators in college football. We work well together. We did have five spring practices which that was invaluable. Then, you know, the Zoom meetings we had when guys were home were outstanding. The players and the coaches did a great job teaching the system and then the work we had in training camp so far has been invaluable.

“We never want to lose the physicality of being able to play college football, but we also want to be able to play wide open and put guys in a position to be successful.”

One of the biggest reasons – if not the biggest – BC will find success this year is their loaded offensive line. With so many guys returning the camaraderie is already there, it’s just a matter of executing at an even higher level with a different system.

One of the main forces on that line is going to be red shirt-junior Alec Lindstrom. Lindstrom also met with the media on Wednesday. The new podcast star talked about why he decided to start doing the “Listen Up My Dudes” podcast and also touched on the #WeWantToPlay movement that seems to have (for now) saved some of the college football season.

“Two weeks before camp Jason (Baum) came up to me with the idea “hey we want to do a podcast by BC football kind of push it out as a day in the life of a student,” Lindstrom explained. “Joke around, have fun with it and just talk to the guys, people want to hear what’s going on. I jumped on that opportunity. I want to do something down the road in the media, broadcasting, whatever really comes my way. When Jason brought up the idea of a podcast I was like “100%”, it’s fun to do. Hang out with the guys, eat some food, it’s everything I love.”

As for the uncertainty regarding the season that swirled earlier in the week, Lindstrom said there’s no doubt in any of the Eagles’ minds about wanting to play this season.

“We’ve already put in so much work this summer,” he said. “Coming back early in July, putting in the work quarantining, and doing everything we have to do to play and sacrificing as a team so we can play. We’ve done everything right. We’ve had zero positive cases for over three weeks probably even longer. The coaches and everyone are doing what they need to do to be safe. Everyone is doing everything we need to and we just want to play.

“For (some guys) it’s their last year, it’s a big year for everybody and we feel that we’ll do whatever it takes to play. We feel safe and it’s fun playing. I love football it’s what I do I love it, so, I want to do what I love.”