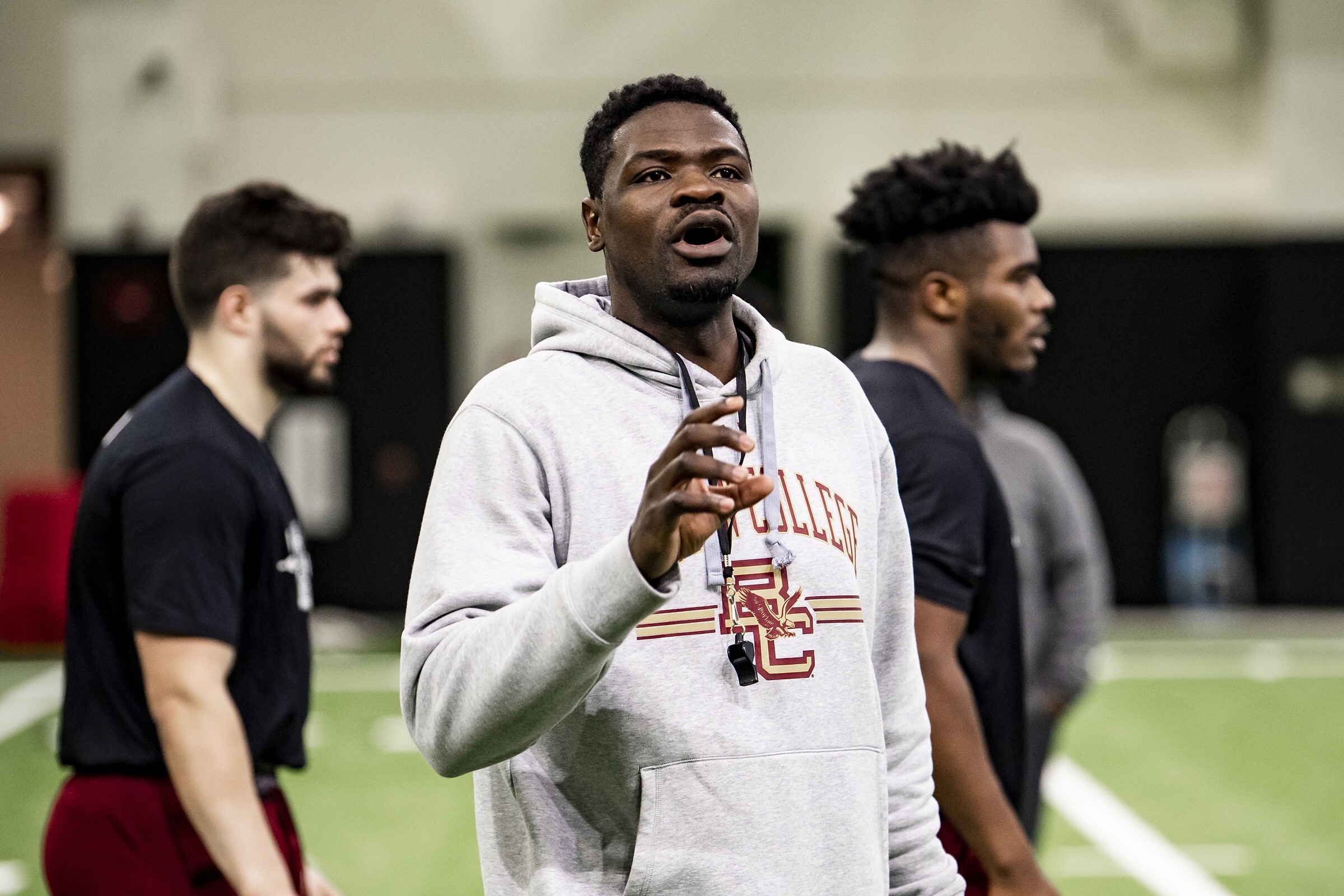 There is an unfortunate belief that high school football will not happen this season here in Massachusetts.

After new “guidelines” were put out on Thursday, and a tweet from WBZ’s Dan Roche regarding the upcoming season being in jeopardy, the doubt began to set in.

While nothing is official, your immediate attention should turn to the players. Missing senior year is one thing, but for those that have a legitimate shot to play football at the next level, or more importantly those that have a chance to get an education they may not be able to otherwise, this could be devastating.

During their media availability on Thursday and Friday respectively, I asked Boston College defensive coordinator Tem Lukabu and head coach Jeff Hafley what impact the game had on them at that age.

“High school football for me was a passion, borderline obsession where you would do a lot of the hard things it takes to be a good football player without even thinking about it, you know what I mean?,” Lukabu said.” You’re talking about – I hate to say it now – but you’re talking about back in the days now you three-a-days and you didn’t even think twice about it. You’re having three practices in one day and a lift, and long runs, but you didn’t mind it.

“I didn’t mind it because I loved it so much. The other part of it, the reality was that it was a perfect means to an end. It was going to help me get an education that I probably normally would not have had the opportunity to get. It helped me make life long relationships, it set up life long relationships, or, understanding how to deal with things that are difficult and come through them. Or, work for what I want, so that whole thing means a lot to me.”

Lukabu also acknowledged that there is a real possibility that he is not where he is today without the opportunity to play high school football.

“I feel really bad for kids that are in that situation where they don’t know what tomorrow’s going to be as far as, am I going to have the opportunity to go through the same things that I went through when I was in high school,” Lukabu added. “It’s a very tough spot. I think it’s a huge character builder. A lot of who I am today is owed to the opportunities I had, including high school and high school ball.”

Meanwhile, Jeff Hafley has coached in almost all of the biggest spots the NFL and NCAA football has to offer, yet it’s the high school days that still stick with him the most.

“I’ve coached in a lot of big college games in some big stadiums and I’ve coached – I haven’t played in – but Iv’e coached in every NFL stadium from Monday Night at Lambeau to you name it, but the high school memories are some of the ones that still stand out to me,” said Hafley. “It’s the players you grew up with, it’s the kids you grew up with who were your best friends and it’s sad that some of those guys won’t get to experience their senior year season.”

The opportunity to put game film out there to college coaches is invaluable to the recruiting process, but Hafley had some advice for those doubting their chances if the season is officially cancelled.

“I feel for those guys,” he said. “As far as recruiting goes, you take a kid who might not have been developed or injured his junior year, and all of a sudden he grew three inches and put on 10 pounds and now he potentially looks like a Division 1 player who doesn’t have a tape, those are guys you’ve got to urge to keep working out, keep believing, keep doing what you’re doing. Send some workout film to us. We’ll evaluate it the best that we can knowing that sometimes guys develop later and sometimes guys have a great senior season.

Positivity is hard to come by these days for many, but the dream of going to college and playing the game at the next level doesn’t have to end just because the season might.