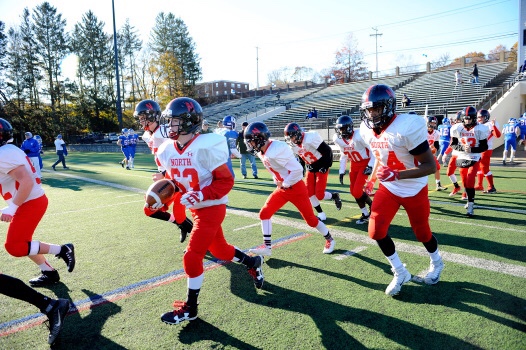 Image courtesy of the Boston Herald. Photo by Joseph Prezioso

I am going to cut to the chase. Here are five simple steps that can be taken to ensure we play high school football in Massachusetts this fall.

The steps coincide with a six game league season six game. Five league games and Thanksgiving. The best team standing at the end would win their league title. There would be no post season.

Here are the steps that need to be taken in order to play.

1. Play league games in two different locations: The season would start the first week of October and go through the first week of November. The players would then have a week off and a week to prepare for their Thanksgiving opponent.

I am going to use the league I am most familiar with as the example for this model. The Hockomock League.

The league is split up into two, six team divisions (Sharon is currently an independent program.) The Kelly-Rex and the Davenport divisions.

The next Saturday, the host sites would alternate. You would do this for the entire season. Thanksgiving could be played at the school that was suppose to host the game.

As far as fans are concerned. Each school would get 50 tickets per game and the tickets would be distributed on a first come, first serve basis. Masks would be required in order to attend.

The ticket policy would be in affect for the entire season including Thanksgiving.

Student athletes and their parents would be responsible for transportation to and from the game site. There would be no buses.

2. No contact practices: We would adopt the Ivy League model but with COVID protocols in essence. I know coaches who are purists don’t want to see this but if you want to play this fall, this is the way it has to be.

Individual drills would be done in small groups that are separated. The emphasis at practice would be on group and team and the use of hand shields. This would help limit some of the direct contact between players.

On field practice time would be limited to eight hours a week. You can only practice on the field Tuesday through Friday. Players would be off on Sundays and there would be no on field practice on Monday. Instead, players could participate in a socially distant appropriate workout and film session.

Finally. There would be no locker rooms. Students would have to bring their helmets, gloves and cleats to school and change in a properly spaced area where they can socially distance.

3. Wear spit shields and masks at practice and in games: Players would be responsible for buying their own own spit shields for their helmets and they would be required to wear a mask or a gaiter along with the shield at practice.

Contrary to popular opinion, the spit shields are pretty affordable. You can get them for $20 to $30 dollars online.

Players would be required to wear at least a mask or gaiter during the game. A spit shield however would be preferred.

Of course the coaches would also be required to wear a mask during practices and games.

4. Monday is an off-field practice: As mentioned earlier. Monday’s would be set aside for working out and film work.

Coaches will have the option of doing a socially distant appropriate workout at the school along with a film session for varsity players after the workout. The coaches will have two hours with their players. All activities would be required to be in small groups and players and coaches must wear masks.

Coaches will also have the option to have their players follow a workout program at home on Mondays and do film session via Zoom or Google Meet. By doing that, you keep the players away from each other for an extra day.

5. COVID Protocols: No player can step in the weight room, a classroom or the practice field without having their temperature checked.

The trainer and two members of the coaching staff would be designated to check the players temperature before practices and a game. All temperatures would be recorded.

If a player or coach exhibit symptoms, they are to stay away from the program and are required to get tested. If the test is positive, they cannot play or coach for 14 days. They must quarantine and get tested again after the 14 days are up. If they test negative after the 14 days and they approval from their doctor, they can come back.

Players and coaches must provide a doctor’s note stating that they have been cleared.

There is a lot to digest here but in the end, parents, players and coaches want to get on the field this fall, then they must embrace a proposal like this and adhere to the guidelines.

If they or their players don’t, then there will be no football. It really is that simple. Times have changed and we need to adapt.