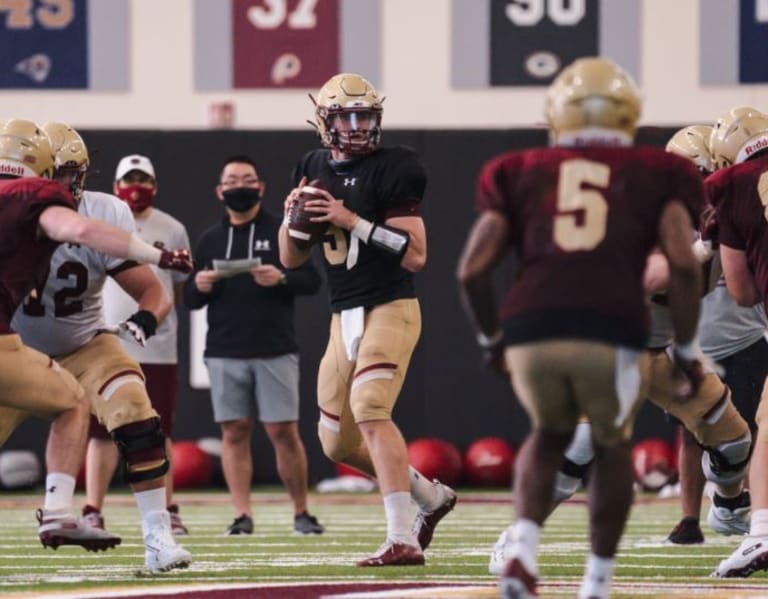 The season seems less likely to be cancelled than it did a week ago, and BC has continued quietly plugging away trying to get ready for its modified ACC schedule.

The PR staff, coaches and players have all done their best to help keep the media and fans as up-to-date as possible through it all, even though the media can’t actually see any developments with our own eyes for obvious Covid reasons. But, by all accounts things seem to be progressing nicely for coach Jeff Hafley and his new staff.

Now more than ever football teams across the country are a work in progress. Veteran players are going to be relied on heavily this season to help carry the young guys with such odd circumstances surrounding training camps. Luckily for the Eagles and their fans, this team has a strong core of older guys who have remained poised throughout all of this turbulence. They survived the Addazio era after all, how much harder could navigating a pandemic be?

We’ve heard from coach Hafley, offensive coordinator Frank Cignetti Jr. and defensive coordinator Tom Lukabu this week, but what are the players thinking and feeling as the season now rapidly approaches? Since there is no availability Sunday or Monday, let’s catch up on what stood out from a few of the veterans that spoke last week:

If you haven’t seen it on the program’s social media pages, position groups have had their own entrances into practice at Fish Field House each day (think WWE or AEW entrances), and they’ve been quite creative.

Arguably the best one has come from the linebackers and Richardson explained what their idea is all about.

“What we do is, we always walk up, and we just tell them ‘hey we got a section, we bought a table up in the club.,’ he said. “So, we can cut the line and we’ll just walk in and get our bottle service and walk right in. That’s what we tell em’. We get out in front, we hop right out of the Uber, they roll out the red carpet and we walk right in the club, that’s what happens.”

The uptick in the social media presence for both individual players and as a team has been hard to ignore as well and a refreshing change.

The biggest strength of the 2020 Eagles’ squad might just be their offensive line. With such a veteran-presence returning, it should make the anticipated transition of Phil Jurkovec to QB quicker and smoother while also allowing Cignetti to get creative with his offensive weapons earlier and often. Petrula spoke glowingly about the relationship the unit has.

“The O-line are a group of best friends,” Petrula said. “We’ve been through a lot together. I would consider – like all the older guys especially – my actual best friends. It’s just a big group of friends and I think it makes us a better unit. I’ll come home and play X-Box with them everyday. I’ll hang out with them, eat lunch together, last year we’d go out to dinner every Thursday before games. That was a tradition we had. We’re just a really tight-knit group and it helps our position on the field.”

DEFENSIVE TACKLE TJ RAYAM ON DEFENSE HAVING A STATEMENT YEAR

The BC defense wasn’t’t feared by anyone last year, proven by the Friday the 13th Kansas nightmare that took place last September. So, with a new staff in place this season and Lukabu leading the charge with the headset on, the Eagles defense is looking for a bounce back performance. Rayam has seen some encouraging changes already during camp.

“It’s a clean slate,” Rayam said. “We’ve got a chance to work with some great coaches, some great defensive coaches that really understand the game and they’ve been teaching us a lot. I know from a defensive line standpoint, like the techniques coach (Vince Oghobaase) has been teaching us and some of the stuff we’ve been learning, everybody’s been executing early in camp. We can see it working. We can see guys at the other levels like linebackers, DB’s working their technique and everything they’re teaching us has just been working.

“Everybody’s trying really hard to kind of get it down and get this playbook down, that’s really going to help us be successful this season.”

It’s been evident even through Zoom that the veterans have set a tone early. Whether it was the five practices the team had before the pandemic, the position group meetings during the beginning of quarantine or the return to campus, veteran leadership has been at the forefront of it all, making Hafley’s job easier. The fact the program has had 791 negative Covid-19 tests speaks to that as well. To a man, each player that has met with the media has said they choose to quarantine, wear a mask and stay as safe as they can for the guy beside them because they want to play.

Of course, it’s early. Players and coaches can talk all they want about how good things are going given the circumstances, but nothing will matter unless it translates to the field.

Still, the view from above looks pretty damn good right now if you’re an Eagles fan.