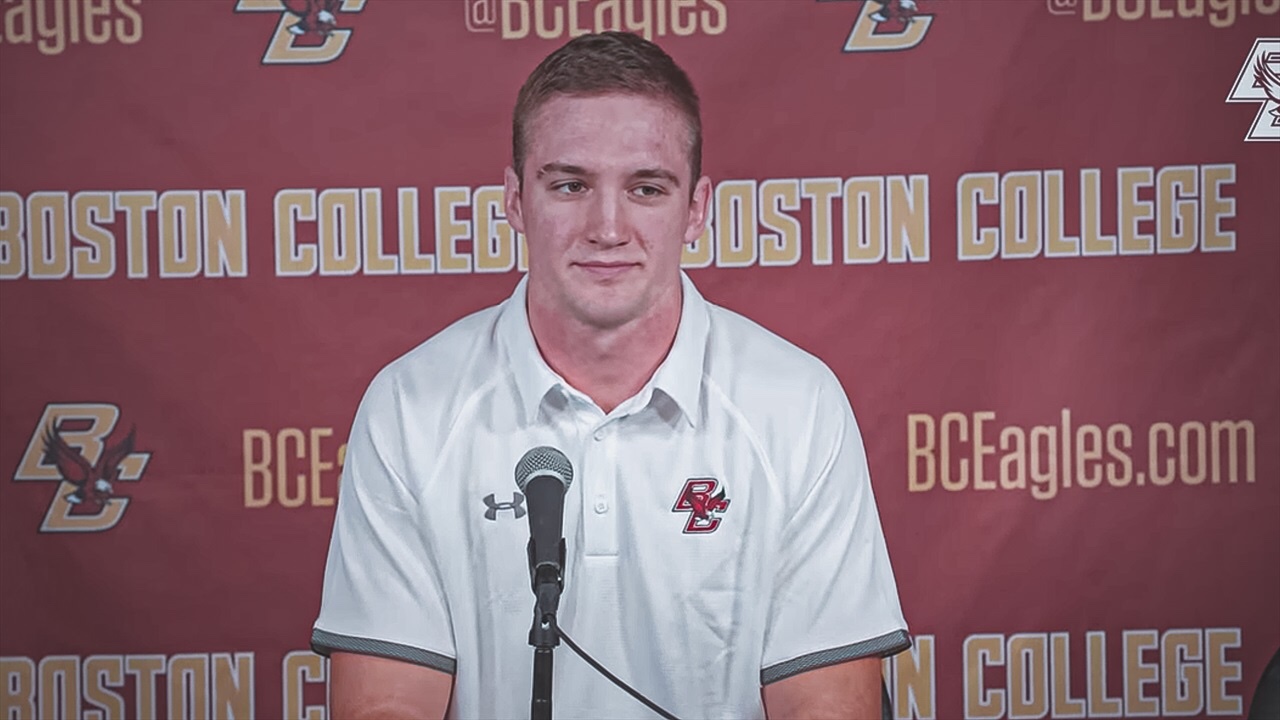 Now that the dust has finally settled on a nerve-wracking few months for quarterback Phil Jurkovec, his assimilation to the Heights can begin, even if it’s a little different than he planned.

Actual football activity has been a nice mental break for the entire team from the seemingly endless horrible news cycle, but, once they’re away from football, bubble life has meant a lot of Xbox or Netflix. It’s also meant very little time to get used to brand new surroundings for Jurkovec and fellow newcomers.

During his media availability on Monday morning, Jurkovec talked about getting used to the area even though he hasn’t really been able to see what the city of Boston and surrounding areas have to offer yet.

“I owe a lot to my teammates for creating that comfort level and welcoming me and helping getting me adjusted to it,” he said. “I still haven’t seen a lot of BC and what goes on. Before Corona was winter conditioning, so we weren’t doing a whole lot outside of football. We’re looking forward to the spring and being able to do some events, get out into Boston and see the city, see the city a little more. I’m looking forward to it and hopefully it’s soon.”

Jurkovec also talked about getting used to something he hasn’t done in a very long time. Huddling.

While it might sound strange, any offense Jurkovec has ran before getting to Boston College didn’t require him to huddle up. But, with a new staff that has plenty of NFL experience, that’s no longer the case.

“It’s definitely different,” Jurkovec acknowledged. “It’s definitely a faster tempo, longer play calling, huddling up. That’s something I haven’t really done since middle school. In high school we were just spread, like three or four formations maybe and the plays weren’t that long (to call). I feel a lot more comfortable with it now and I like being able to control the huddle.”

Jurkovec has plenty of catching up to do that helps keep his time occupied, but having been in the “BC Bubble” for a few weeks now, he also acknowledged that keeping yourself motivated and keeping things fresh is part of the daily process to get through training camp.

“Yeah, I think it’s starting to hit now, it’s starting to be a little bit of a grind,” he said. “But, with the practices, every day they’re different. Every day (the coaches) create a new challenge for us and give us different things to focus on. Whether it be red zone or two minute, or end of game situations, there’s always something the next day to focus on to get better. We just try to mix it up as much as we can.”

Perhaps the best news that Eagles fans can hear from their new QB is that despite a less-than-ideal assimilation process, Jurkovec and new offensive coordinator Frank Cignetti Jr. are already developing a cohesive relationship that could spell trouble for opponents this season.

“He’s very transparent,” Jurkovec said of his new OC. “Everything that he’s thinking about, he relays to us. He gives the quarterbacks a lot of control of the offense in terms of creating the signals, creating the names of what we want to call everything, and just talks us through everything.

“We really feel like we’re on the same page as him all the time.”