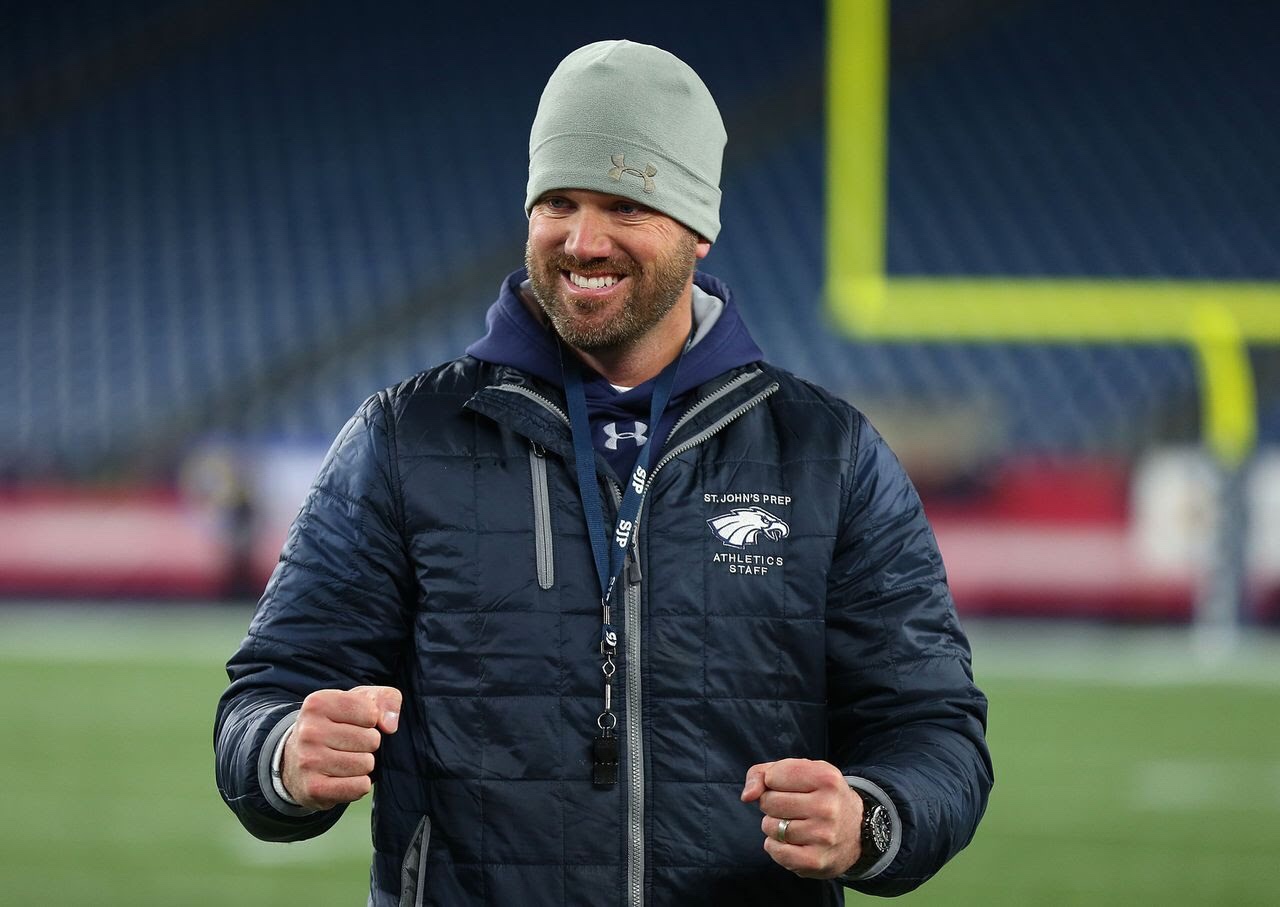 It’s been almost 20 years since Brian St. Pierre last put on pads for a football game in the state of Massachusetts, but his impact on the game locally is as important as it’s ever been.

The St. John’s Prep grad turned Boston College quarterback finished his SJP career in 1998 and was the Eagles’ quarterback through 2002. St. Pierre was soon drafted by the Pittsburgh Steelers in the fifth round of the 2003 draft.

St. Pierre bounced around between the Steelers, Ravens, Cardinals and Panthers before wrapping up his NFL career by 2011. A few short years later he was named the head coach of the football team at his alma mater SJP for the 2014 season.

With two MIAA Super Bowl titles to his name in the last two seasons, St. Pierre’s impact on the game locally has been impressive. He’s been so impactful that Max Preps recently announced him as the top coach in Massachusetts. Max Preps listed the top coaches in all 50 states (https://www.maxpreps.com/news/y_qmzTBwiU-s_C8CR7yrxw/top-high-school-football-coach-in-all-50-states.htm) with St. Pierre topping a long list of highly qualified candidates in this state.

“Well, first off there are a lot of great football coaches in this state, many of which are on my schedule so it is humbling,” St. Pierre said via email on Wednesday morning. “Although I sincerely appreciate the MaxPreps recognition, personal accolades really aren’t my thing and it’s not why I do it. When my playing career ended in 2010-2011, I had opportunities to coach both in the NFL and in college but my wife and I just had our first child and I wanted my kids (three now) to have roots. I knew I wanted to coach but coaching at the professional and major college level is not conducive to staying in one place very long so when the opportunity presented itself to return to my alma mater St. John’s and become the head football coach I felt very blessed.

“To be able to coach the game I love at a place I love is special to me. When I took over, my motivation was simply to try to make a difference in kids’ lives teaching them the game I love, to foster in them the love of football and competition that I have, to teach them about what coming together as a “team” really looks like and feels like and to develop a program that does it the right way and wins. I LOVE the competition and I hate losing more than I love winning. It drives me.”

St. Pierre has seen the highs and lows of high school and college sports, but things have never been stranger than they are this season. With uncertainty still swirling around the fate of this season at nearly every level, I asked St. Pierre how important it is for young guys with dreams of playing college ball to not give up on those dreams too soon.

“If playing college football is a young man’s goal, keep working,” he said. “No reason not to. Although, this is an extremely difficult situation for them to be in, giving in to circumstances is not the answer. Make sure you are ready when your number is called. Many colleges are in the same boat as many of the high schools in terms of football being postponed to spring. I think it just extends the recruiting period for this year’s seniors and to a lesser degree the juniors.

“Football programs are going to run again. They need qualified student athletes to do that. I am confident that the kids who are good enough football players will get the opportunity to play collegiately. The timeline is different to some degree but if you can play you can play and there will be people who want to recruit you to their respective program.”

St. Pierre acknowledged he’s always kept a close eye on BC during his playing and coaching days. Now, with a new staff he’s just as excited as very other Eagle fan and ripe with optimism.

“I always keep tabs on BC,” St. Pierre said. “I had a great experience there both as a student and as an athlete. I am very loyal to them. I am excited for the new staff and for their players. It seems like Coach Hafley has brought a new energy to the program and the buy-in is there. That has to be the number one goal of any new staff-you have to have buy-in (players, coaches and administration). If BC supports them – and I have no reason to think they will not – I think that they will get back to being what were not too long ago: Top 25 type of team winning bowl games, graduating their players at a high rate and sending guys onto play in the NFL.

“BC has a very strong reputation in NFL circles as it relates to producing guys who stick in the NFL and I think Coach Hafley will continue that tradition and even enhance it.”

It’s been quite a ride so far for St. Pierre, and now that he is considered the top high school coach in Massachusetts, I asked him to reflect a bit on how many different life lessons he learned throughout his career that apply to his coaching style today.

“Honestly, I think I took lessons from every one of my stops along the way in my football career not just from BC,” he added. “I had a bunch of different style coaches. I reflected on that quite a bit in my life and still do. Tom O’Brien – who was my head coach at BC – was tough. He was a Navy guy, ex-Marine and he coached us that way. There was not a lot of “warm and fuzzy” with him. No fluff. I always appreciated that though, because you always knew where you stood with him and the military approach appealed to me. Bill Cowher – who I played for in Pittsburgh – was very different. He was more of a players’ coach and loud in your face but also tried to have fun with the guys from time to time.

“I think in the end, you have to be authentic to who you are. My style is unique to me just like theirs was to them.”