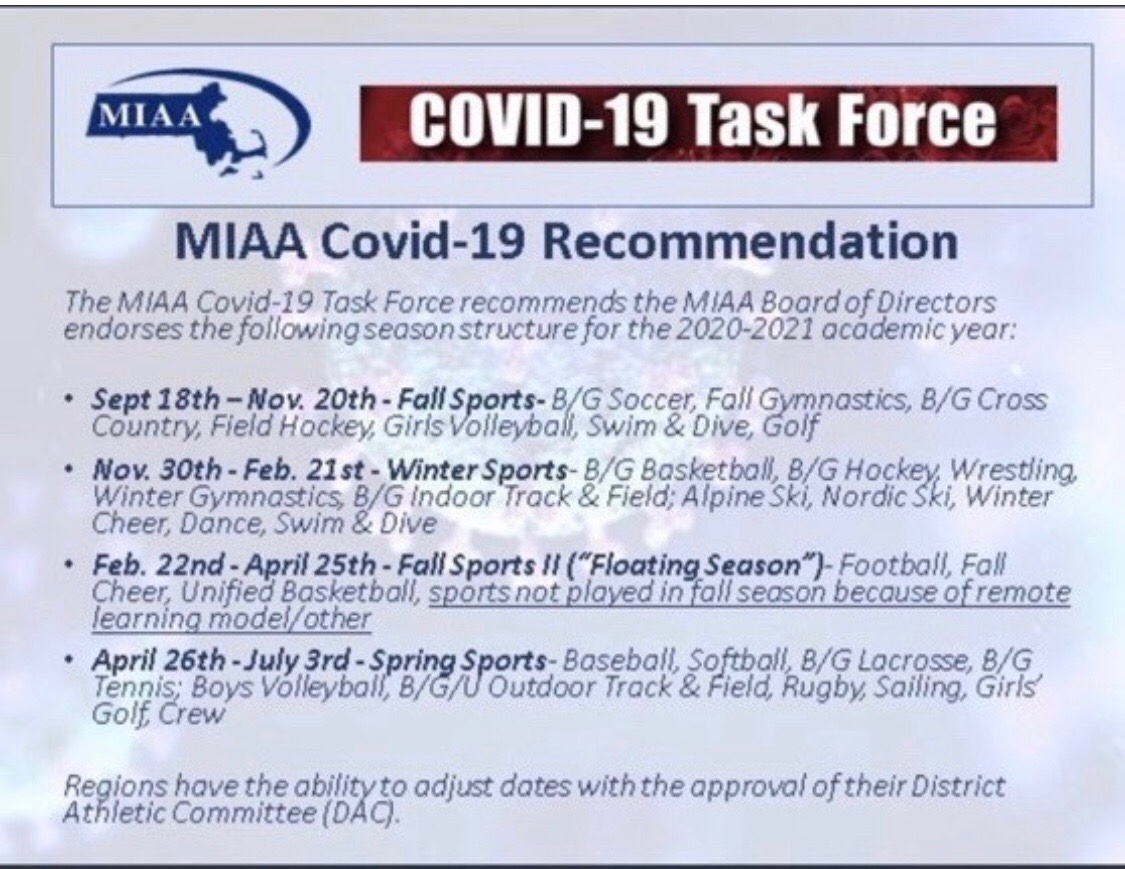 The MIAA Board of Directors voted yesterday to pass a proposed revamped schedule of high school sports in Massachusetts due to concerns over COVID-19. The new calendar is based on the recommendations the COVID Task Force, EEA and the governor’s office.

As part of the plan, the fall sports season was divided into two seasons. Fall I (Soccer, Field Hockey, Cross Country, Golf, Swim and Dive and Volleyball) and Fall II which will be played in the late winter (Football, Cheer and Unified Basketball.)

Fall II or football season will be played over a nine week period. February 22nd to April 25th. There will be no post season for either fall season. Which begs the question. How is this fair?

How is it fair to tell kids that play fall sports that the best they could this year is compete for a league title. You have no chance to win a state championship. That is utterly absurd.

I don’t understand how you can diminish the importance of a season? I understand playing a season of some kind is a win right now but I still don’t think this is fair.

It is not lost on me that we are living in a pandemic. I care about student athletes and their well being. I have been an educator and coach for over 20 years. I GET IT! However what I don’t understand is how we can play sports like field hockey and soccer that do involve some physical contact in the fall and not try to play football.

If the proper safety precautions were taken, we could have given football a shot. Instead, we punted the season forward to the spring and told coaches in all sports that they can work with their players from now until July.

So to recap. We have no football this fall and coaches from all sports can now coach their kids out of season. With their principals permission of course. Yeah. That won’t create any friction within athletic departments or force kids to pick one sport over another.

The reality is, fall sports got the short end of the stick. I don’t have an issue with winter and spring sports have a post season. They should. Both seasons lost out when the world was shut down in March.

I do however have a problem with not developing a calendar that would allow fall athletes to compete for something more than a league title.

I know the world has changed. Life as we know it is not the same. That is not to say however that we can’t try to return to a sense of normalcy. I think we could have tried to play football this fall and given the kids some sense of normalcy again.

Instead, the powers that be opted to kick the can down the road with no guarantees that things will be any better in the spring.

All of this is being done in the best interest of student-athletes and their health. However we have no problem playing two football seasons in nine months. That makes sense.

Decisions like this highlight the lack of leadership that exists in our country today. Committees with no real connection to sports are making decisions that are impacting our kids. Maybe we should ask those who participate in high school sports what they think before we make a decision. It would only make sense.

I don’t envy athletic directors, coaches, parents or the athletes right now. I wish them luck. They are going to need it navigating around this senseless proposal.