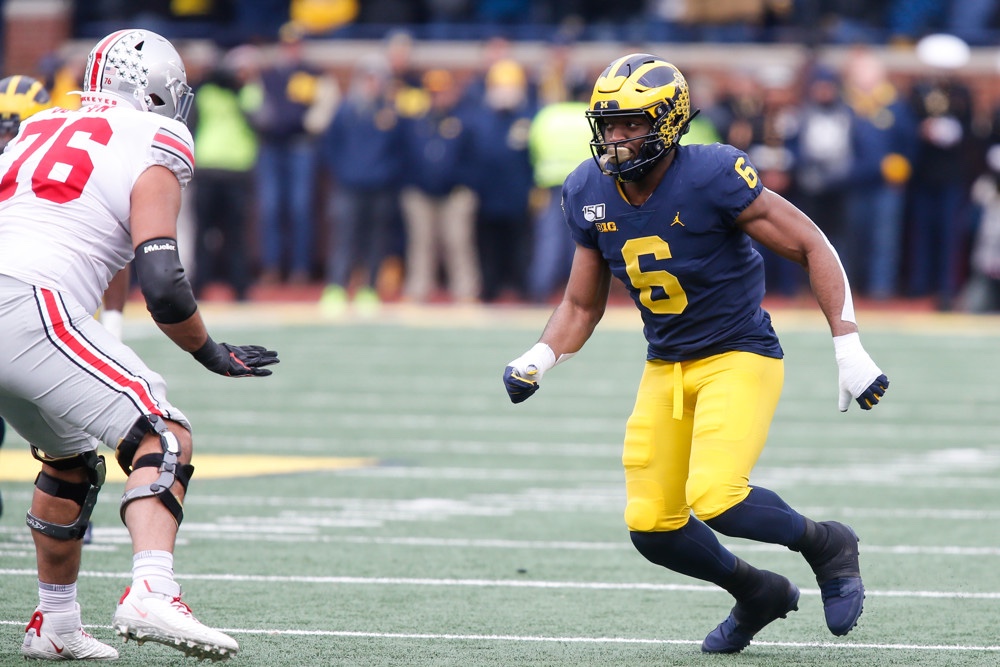 Rookie Josh Uche must make an immediate impact for the Eagles.

Linebacker was a strength for the Patriots last season but thanks to free agency and COVID-19 opt outs, the position appears to now be the weakest part of the defense.

Kyle Van Noy, Elandon Roberts and Jaime Collins all left via free agency. Stalwart Dont’a Hightower opted out due to COVID-19. That leaves third year middle linebacker J’Whaun Bentley as the elder statesmen of the group.

The Patriots are going to be young at this position. Bill Belichick focuses on the position in the draft so the Patriots were able to fortify the position and add some much needed depth.

We are going to start with the outside linebackers.

Chase Winovich, Michigan, 6’3 256, 2nd Year: Winovich flashed upside at times last season finishing with 5.5 sacks but he will be counted on to produce even more this season.

Winovich can play as an on the line outside linebacker or he can step back in a leveled alignment and play in space.

With Hightower out, Winovich will have an opportunity to get more meaningful snaps and make more of an impact.

John Simon, Ohio State, 6-1 257, 7th Year: Simon is an integral part of the Patriots because he plays in sub packages defensively and on all the special teams.

Simon predominately plays as a stand up outside linebacker but he can also play in a three point stance as a defensive end in dime packages.

Simon could see an increase in snaps defensively but his role will still be predominately as a special teamer.

Shilique Calhoun, 6-4 251 Michigan State, 4th Year: Calhoun re-signed this off-season and he will have an opportunity to play more snaps defensively. Calhoun played in sub packages and on special teams last season but with his length and explosiveness, expect him to be in the mix to start or an increased role.

Brandon Copeland, 6-3 260, Penn, 8th Year: Copeland signed this off-season to play primarily special teams and provide depth at linebacker. Given the lack of experience at the position, Copeland will end playing more than he expected.

Anfernee Jennings, 6-2 256, Alabama, Rookie: With Hightower opting out, Jennings has the most to gain. The rookie out of Alabama is similar to Hightower physically but isn’t as explosive.

Jennings has predominately played as an online linebacker but he has also put his hand in the dirt and played as a five technique defensive end. It is that versatility that made Jennings appealing to the Patriots and could lead to him having a greater role this season.

JaWhaun Bentley, 6-2 250, Purdue, 3rd Year: Bentley is the elder statesmen of sorts of the Patriots linebacking corp. slated to start at the MIKE or middle linebacker spot, Bentley will be tasked with being the primary signal caller of the defense. It is one of the toughest jobs in football but Bentley has been in the system for two years and he knows it. He should have no problem transitioning to this all important role.

Josh Uche, 6-1 245, Michigan, Rookie: Uche was drafted in the second round of April’s draft. While most of his experience is an a five technique edge rusher, Uche has the athleticism and the skill set to play as an off line outside or inside linebacker.

Uche will have a steep learning curve but once he figures things out, he has the potential to be a highly productive linebacker that the Patriots could use in a myriad ways.

De’Jon Harris, 6-0 234, Arkansas, Rookie: Harris was signed as undrafted free agent. He has an intriguing skill set physically and plays with good instincts. He is a little raw in coverage but does have good ball skills. He will have an opportunity to make the team as a back up inside linebacker and special teamer.

Cassius Maluia, 5-11 241, Wyoming, Rookie: Maluia was a tackling machine at Wyoming. He has good instincts and can play downhill. He also has terrific ball skills and is adept at playing underneath in coverage. Maluia will make this team as a specialist but offers intriguing long term potential as a MIKE linebacker.

Terez Hall, 6-1 230, Missouri, 2nd Year: Hall has good size and good instincts. He recognizes run plays quickly, takes good angles and gets to the ball. He is better fit to play in a one gap system where he can read and flow. Hall can make this team as a special teamer for now but he will struggle to get reps.

The Patriots have some intriguing talent at the line linebacker position but they are young. There will be growing pains but if these young players develop, it will benefit the team down the road.