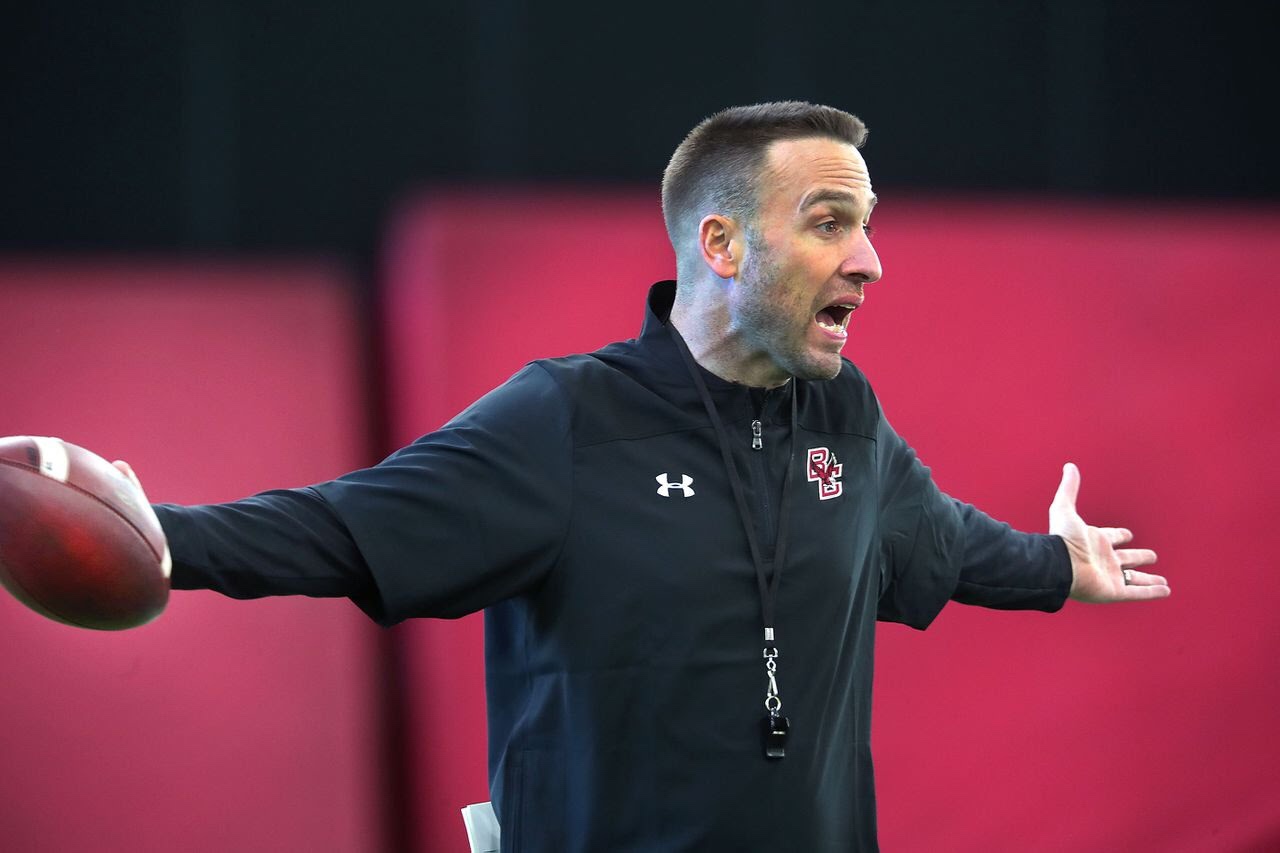 If for some reason you choose to look at preseason prognostications for the 2020 college football season – an unprecedented year that is going to be as unpredictable as a Kramerica Industries rubber ball filled with oil experiment – then that’s your prerogative.

It’s impossible to take any type of prediction on what teams will look like this season seriously, but those that have done so have thrown quite a bit of shade towards the Boston College program. Many publications are treating BC as the little brother of the ACC with no chance of competing against the bigger brothers at the top of the conference.

Of course, the Eagles are focused on continued health first and foremost (1,500 negative Covid-19 tests as of Tuesday), but also getting used to an entirely new system on both sides of the ball.

That doesn’t mean BC hasn’t heard some of the noise though.

“We see it,” head coach Jeff Hafley said during media availability on Tuesday. “We see everybody’s picking us last in the ACC. It is what it is, right? It doesn’t bother me. I don’t know how much you use it. We see it though, I’m not going to say we just ignore it. You definitely see it and that’s what people think, we’re going to finish last in the ACC, so it’s our job to prove those people wrong.”

Since his introductory press conference, Hafley has talked about having a chip on his shoulder and has seemingly since placed that chip on the collective shoulders of the program. So, I asked coach whether or not he would use the negative press as proverbial “bulletin board” material throughout the rest of preseason or before the Eagles take the field for the opening kickoff against Duke September 19th.

“I haven’t addressed it with the players yet, there’s a time and a place for all that,” he said. “Right now we’re just trying to get better, we’ve got a lot of work to do. We see it though, loud and clear.

“Some people don’t think we’ll win one game, so we’ll do our best to prove them wrong.”

The staff hasn’t addressed the outside noise yet, but the players are already well aware of it too. Linebacker Max Richardson acknowledged that the Eagles are using being slighted to their advantage in a productive way.

“For sure. Everybody wants to be talked about and everybody wants to be ranked among the best,” said Richardson. “But, if you’re not (being talked about) then, that’s the goal you’re working towards. For sure, we’d like to use (the talk) to help better ourselves, the great players always use little mental notes and things to get them going. So, that’s something we try to do as a team as well.”

Perhaps the biggest reason why doubters may be eating their words this season is the fact that in just a matter of months, coach Hafley and the new staff have managed to get the entire program to buy in at a level some staffs need years to get to in terms of trust from the players.

On Wednesday, Alec Lindstrom was asked why BC has been able to have so many negative Covid-19 tests. He went on to explain that the team has had no trouble believing everything the staff has told them.

That could mean trouble for the rest of the ACC as the Eagles continue to fly under the national radar.

“The thing that makes it really easy to buy in to coach Hafley and everybody is just the way he treats us,” Lindstrom said. “He treats us with respect and he treats us so amazing. The environment he’s already created, it makes me want to buy in and it makes you want to do the right thing because he treats us well. It’s hard. We sacrifice and it’s hard and he knows that and he relates with us.

“So, he’s like ‘hey today’s a pool day’ and we’ll go swim at the Plex, or, ‘hey today we’re just going to kind of chill out.’ He’s kind of taking care of us physically with practice because he knows. He’s really the definition of a players coach, so it’s very easy to connect with him and follow him because he’s a great leader and he takes care of us – and just the environment – it’s hard not to buy in.”