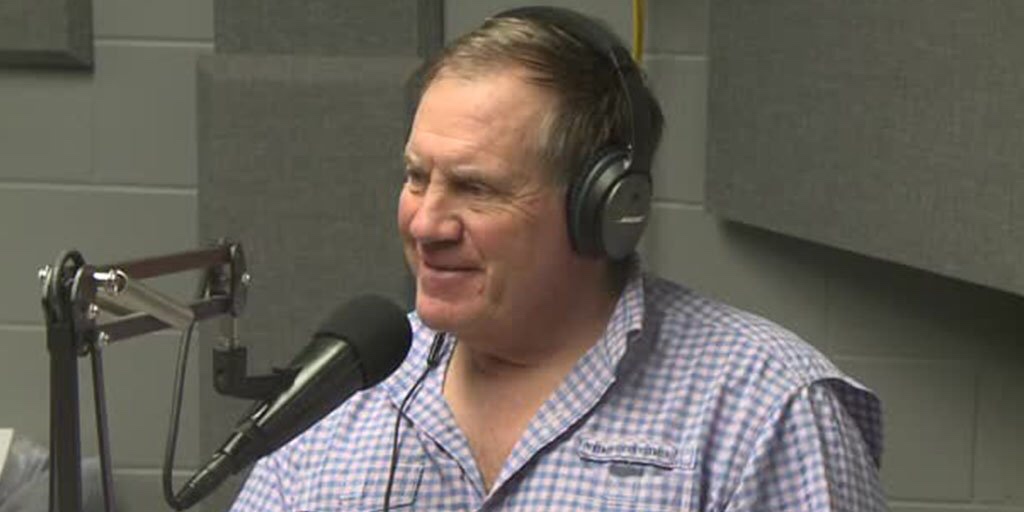 For years now, WEEI has always hosted a ‘Patriots Monday’, interviewing players and coaches throughout the day.

The afternoon drive show OMF (Glenn Ordway, Lou Merloni and Christian Fauria) is lucky enough to have Bill Belichick on during the season, and Monday evening provided another glimpse into the mind of BB as he gets set for Opening Day against Miami.

While his tone will literally never change in terms of delivery, Belichick’s interview on Monday was a bit more important than usual as it was the first one heading into an unprecedented Game Week. Bill had quite a few interesting things to say in his talk with Ordway and Fauria (Lou was missing and Bill even acknowledged it) and seems to be a bit more accommodating and willing to engage with reporters so far this year as well.

Is he just getting older and more appreciative of his current position? Is it Linda Holiday telling him to be nicer? Is it knowing that his kids are well on their way to continuing to carry out his legacy a 1 Patriot Place once he decides to leave? Whatever it may be, we’ve already gotten a much different Bill this year. Here’s a few things that stood out to us in Monday’s interview as the Pats get set for Miami in Week 1 :

ON IF HE STILL HAS THE SAME PASSION FOR THE GAME

Ordway introduced Bill and then noted it was going to be his 46th season. The question was then asked whether or not Belichick still has the same drive and passion for the job after so many years.

“It’s great to work with the people I work with,” he said. “Some great players and a good staff, there’s a lot of good people around here. I enjoy it, it’s very challenging but it’s also rewarding. it’ll be interesting to see how this year turns out. Certainly this year has been different than any other ones that any of us have been through so, we’ll see how it goes.”

ON WHY HE THINKS CAM WAS VOTED AS A TEAM CAPTAIN

Fauria is a former player of course and pointed out that guys like Alge Crumpler and Rodney Harrison were named captains during a season but not before. He asked Bill what he thought it was that impressed the other guys enough to vote Cam as a captain so quickly.

Fauria had an intriguing follow up question, asking Bill whether or not the quarterback has to be a captain simply because of the weight of the position or whether it even matters at all.

“I think it’s a position of natural leadership,” Belichick added. “Whether they’re named a captain or not, they lead the team. They call the play in the huddle, make decisions at the line of scrimmage and all that, so there’s a lot that goes in there at that position in terms of leadership anyway.”

Belichick also acknowledged that this team is full of leaders, even if all of them aren’t named captains.

“As you know (Christian), there’s always guys that could be captains, maybe deserve to be captains, and just because they don’t have that designation doesn’t mean they aren’t positive leaders on the team,” said Bill. “We have a lot of guys that fall into that category, so yes it’s significant (QB’s being captains), but leadership runs through the whole team it’s not just a handful of guys. That’s just not enough.”

Officiating is always scrutinized, but Fauria pointed out that the refs will not have time to make mistakes and prepare in preseason games just like players. The speed of the game is often trouble for the older officials, so is officiating going to be an even bigger concern as the season approaches?

“We can’t control any of that,” Belichick said. “I don’t think that’s anything we need to worry about. We have enough things with ourselves we need to address. That’s what we’re going to focus on, the things we can control and what we do. Whatever the rest of it is or isn’t, that’s really out of our hands. I’m not going to worry about that too much. We’ve got plenty of things to work on. I’m sure (the refs) are doing the best they can to get ready.

“I’m sure Al Riveron and Walt Anderson and all the rest of them are preparing like they can prepare -whatever that is. We’ve got so many things we need to do ourselves, the last thing we need to do is worry about somebody else’s job.”

ON CROWD NOISE THIS SEASON

While some teams will have limited capacity in stadiums, the NFL decided that all teams can pump in up to 70 decibels of crowd noise to start this season. That’s not much at all, but it’s still something different the Patriots and the rest of the NFL has to prepare for. Ordway asked Belichick how he’s had to prepare for the oddity of constant noise, and what he compared it too was actually very interesting.

“We’ve been doing that for several weeks, Glen,” said Belichick. “Probably two and half weeks or so. We’ve played in very loud stadiums, and you know when we play at home and we’ve had the ball it’s relatively quiet, you can hear signals called and all that, and we’ve been in between. So, the one thing I would say that’s different is there’s just a constant noise.

“That’s not really what we’re used to. We’re used to highs and lows. It goes up and calms down, then it goes up and it calms down, so this noise is more constant – although when the clock stops for a TV timeout or the end of the quarter, stuff like that, you get the normal music or whatever activity there is – but on a down to down basis I think it’ll be more of a constant noise than you normally get in a stadium. It’s a little bit like a Super Bowl in that because it’s a neutral game and the fans are pretty well split it’s just loud all the time. I’m not saying this will be as loud as a Super Bowl, but when you play in the Super Bowl there’s no true home crowd.

“There’s just more of a constant noise you have to get used to, and I think that’s more of what we’ll be dealing with.”

This year is going to be unlike anything we’ve ever seen as football fans, and this is a Bill Belichick that we haven’t really seen as Patriots fans either. The fact that Fauria is a former player always helps get a little bit of Bill’s human side out, but Monday’s interview was just another example of how 2020 Bill is not the Bill we’ve all grown used to.

Bill’s weekly interviews with OMF this season are going to be must-listen as we witness the dawning of a new Patriots era.