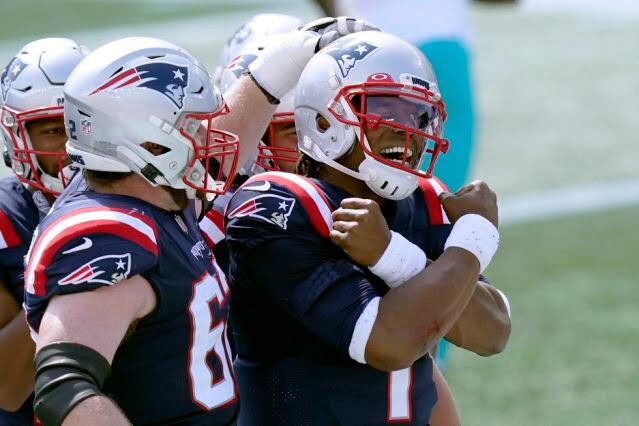 We didn’t know what to expect, and it wasn’t pretty, but the results were still the same in the end.

The Cam Newton Era in New England opened with a 21-11 win at a silent Gillette Stadium on Sunday afternoon. It was certainly a changing of the times, as the running game was the story.

Newton carried the ball 15 times himself for 75 yards and two touchdowns. The ability to call some very different things was a fun thing to see and Newton took full advantage of Josh McDaniels’ creativity.

“It was different,” Newton said. “One of the coaching points for the game was being accessible to in game adjustments, and getting a win like that – that’s not necessarily pretty at times – is good for the overall team character.”

It was strange seeing Newton as the guy under center, but he did a respectable job in certain situations on Sunday leading the team through adversity.

The most glaring one came with the Pats looking like they were driving to ice the game while up 14-3. N’Keal Harry was stripped inside the 5-yard line, causing a fumble with the ball rolling through the end zone for a touchback, giving the Dolphins life.

Miami cut it to 14-11 in the fourth quarter on a 1-yard TD run by Jordan Howard on the ensuing drive. The Dolphins decided to go for two and converted it on a scramble by Fitzpatrick with 10:31 left. That’s when Cam faced his first true test.

With the team in desperate need of a drive that would not only give the defense a rest but halt momentum, the Pats went to work. New England was the beneficiary of a huge penalty following a 23-yard run by Julian Edelman on the first play, immediately putting them near midfield. As the drive continued, Newton came up with a beast-mode like effort to earn a 4th-and-1 conversion, and Michel punched in his TD on the ensuing play to make it 21-11.

Fitzpatrick managed to drive Miami downfield again, but ultimately ended it by throwing a pick in the end zone to JC Jackson.

The Pats wasted little time establishing the run early in this one, and Cam Newton ran the ball on just the second play of the game. The first two drives stalled, but on the third possession this season Cam methodically led an 11-play, 80-yard drive and finished it with a 4-yard touchdown run for the first points of the season in the second quarter. The Pats took a 7-3 lead into halftime.

Newton also led an eight-play, 75-yard drive in the third that he capped with an 11-yard TD run to make it 14-3 heading to the fourth.

The defense was good, and most importantly the tackling wasn’t as bad as expected, which is something both NFL and college coaches have been worried about all offseason.

Overall it’s going to have to get a lot cleaner and receivers are going to have to find ways to get open otherwise Cam will eventually get killed. The lack of separation was scary, but Newton and the run game were able to survive Miami, I’m not sure they can survive Seattle next Sunday night.

It was even weirder than we all thought it would be, but the results were the same. The Pats are 1-0.