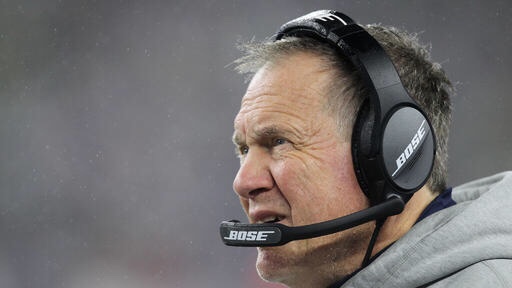 Last week we decided that Bill Belichick’s weekly “Patriots Monday” interview with Ordway, Merloni and Fauria would be a topic of discussion for us all season long.

Glenn Ordway has been perfecting the interview game for decades now. Meanwhile, as a former player, Christian Fauria sometimes has the ability to get some more thoughtfulness out of Bill compared to most media members. It’s clear that Bill hates Lou Merloni for some reason (he’s actually a good guy), but his questions don’t always get the derogatory snort from BB.

After earning the first win of the year 21-11 over Miami on Sunday, Bill joined the guys Monday evening for his usual appearance and once again had some interesting things to say.

“It’s always great to win,” Bill said after Merloni began the interview asking him if it was about as good as could be expected given all the odd circumstances. “Definitely happy about that. Thought we did a lot of good things and there’s certainly a lot of things we need to work on and improve in so we’ll continue to do that.

“I’m proud of the way guys competed and kept their poise. They worked hard for 60 minutes and we didn’t have a lot of plays we beat ourselves with on penalties and missed assignments, bad tackling and things like that, so there’s room for improvement, but, overall we’ll take it.”

As he has basically since signing him, Belichick was extremely complimentary of Cam Newton’s day as well. Ordway eventually played a small clip from Newton’s regular interview with “The Greg Hill Show” Monday morning, where Cam talked about how working with Bill has been so much different than he anticipated.

“He makes even the smartest players more cerebral,” Newton said. “We go over situational football each and every day, and there’s no point in time where he cannot stop something and teach you something. He’s the ultimate teacher. I didn’t know what to expect coming in here, you hear stories. I’ve just been blown away by his professionalism”

Bill’s response was equally as complimentary when Ordway followed that up by asking if Cam has been different than he thought he would be.

“People I talked to that coached him pretty much saw the same thing I’m seeing,” said Bill. “Auburn, Carolina, they’re pretty consistent. The personality and working with someone day-to-day is different than talking to someone else about them, but we certainly have and had plenty of players and coaches that we’ve known that have worked with Cam just like I’m sure he’s had plenty of relationships with players or coaches that have been here.

“We spent quite a bit of time in the process of getting to know each other before he actually signed here. He’s a very honest, open person that works extremely hard at his job that’s committed to the team, so, I don’t know how you can ask any more of a player than that.”

Fauria also asked Belichick to touch on how special it was to see guys like David Andrews and Derek Rivers finally getting back on the field and making an impact after so much injury trouble, or in Andrews’ case, a life-threatening situation.

“It’s great,” Belichick said. “I talked to (Andrews) after the game, it’s great for him, Derek Rivers, you know, guys that have been in that situation where they – through no fault of their own – got a bad break or just weren’t able to have the opportunity they worked very hard to get. So, when those guys got (their opportunity) they deserved it and I’m happy for them, I’m happy for us and happy for them.”