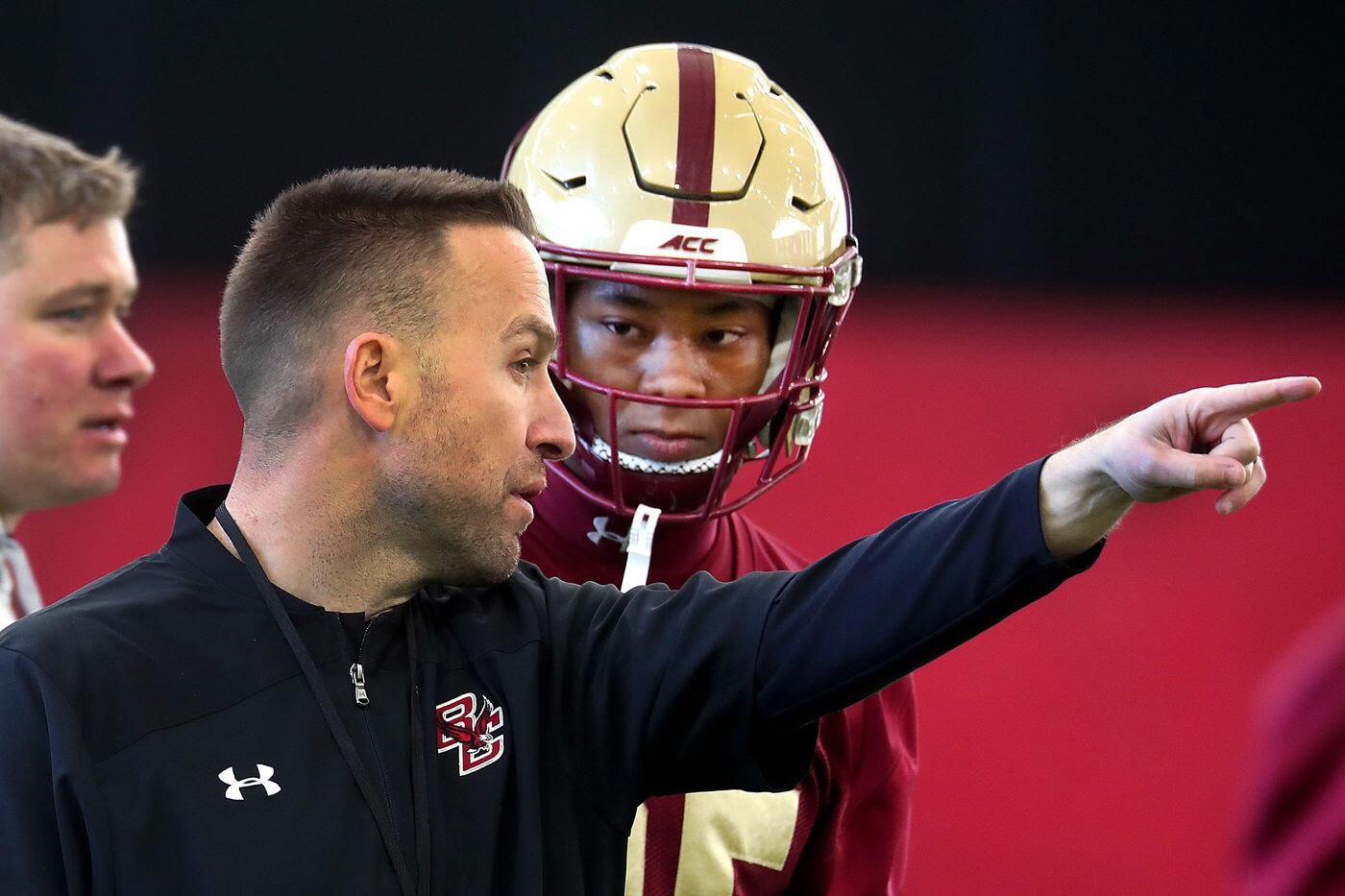 The Boston College football team is going to play an actual football game on Saturday.

It seemed as if this would never happen. After months of uncertainty, the Eagles finally see a light at the end of the tunnel, and that light is a date with Duke down in North Carolina Saturday at noon.

Tuesday and Wednesday Coach Hafley and various players met with the media for the final time before traveling down to Durham for the game this weekend and touched on a myriad of topics.

BC’s coaching staff had the opportunity to watch six different opponents on the 2020 schedule (Notre Dame, Clemson, Syracuse, Duke, Texas State, North Carolina) play this past Saturday in “Week 2” of this unprecedented season, something Hafley admitted made the staff a bit jealous.

“I was actually kind of jealous all those teams got to play and we didn’t,” Hafley said Tuesday. “Starting as late as we are, you usually see a big jump from week one to week two, you get the kinks out, you’re anxious playing a real football game, you clean up some stuff. So, I don’t think it was a luxury that we didn’t play one of these first weeks. Honestly, when games are on TV you just kind of watch them as a fan.

“Once we get into the season we get all the tape with all the angles, we spend that week really preparing for whoever we’re playing. I just think it was so awesome to see college football back and seeing these kids getting an opportunity to play football was fun to watch.”

This is going to be a big week for defensive line coach Vince Oghobaase as well. Oghobaase began his coaching career as a defensive graduate assistant at Duke in 2011. He also helped the Blue Devils earn the program’s first bowl game appearance since 1994. Oghobaase was a four-year starter as a player at Duke from 2006-09, playing in 44 games. He registered 165 tackles during his career, and finished his career ranked sixth in Duke history in both sacks (14.0) and tackles for loss (36.5).

“I’m excited for Vince,” Hafley said. “He’s done an unbelievable job with our D-line and I know a ton of people at Duke probably have a lot of respect for him and I’m excited he gets a chance to go back where he came from and coach football.”

The travel arrangements are of course going to be quite different for the team and other teams around the country too, something Hafley touched on both Tuesday and Wednesday.

“I’ll probably find out a lot more (on Thursday), but it’s probably not going to be normal,” he said. “From spacing out to can you or can’t you eat on a plane, restrictions with how many in a room, wearing a mask on a plane. But, we’re just grateful. If we had to take a bus to Duke or take 10 different buses I bet you our team would have voted to get on a bus and go. We’re not going to complain, we’re not going to make excuses, we’re just happy we get to go play a football game.”

“”We’re going to test when we land,” he said. “We’ll probably test before we leave. When we get in the hotel, it’s almost like we’re creating our own bubble. Then we get on our buses, and we get into that stadium, and we try to keep that bubble for the game.”

The players have been here since June, and with quite a bit of sacrifice, they have earned the right to get on a plane and go play this weekend whether people think they should be or not. When asked about reflecting on what it took just to get to this point, offensive lineman Alec Lindstrom had a thoughtful answer.

“Guys took (quarantining) seriously because they wanted to play and they wanted a season,” Lindstrom said Wednesday. “Now that it’s here…the excitement that I have, that I know the older guys have and even the younger guys actually game planning…it’s like alright, you get to the middle of camp and it’s like ‘man this is really getting tough’, now we’re in game week and everyone’s excited.

New D-line graduate transfer Luc Bequette (from Cal) hasn’t been here long, but he’s been happy with his decision after the Pac 12 decided not to play football. The Eagles have welcomed him with open arms and he has already felt that selfless, family atmosphere around the program that Lindstrom talked about.

“It’s been a quick transition but it’s been good,” Bequette said. “In every aspect BC felt like the Cal if the East Coast. The coaching staff and the players all seemed likable and a very close-knit unit, we’re 20 minutes from a major city and it’s a good school, so I think it was just more of a comfort deal more than anything.”

Whether they’ve been with the program for three months or five years, the Eagles have all committed to Hafley’s “Get In” mantra this season – and even though there won’t be fans in the stands to start the year – BC is just happy to be hitting guys in blue jerseys this weekend. It’s been a long time coming.

” I just keep telling the guys, look how lucky we are to play football,” Hafley added. “So, if we can’t have fans right now then block it out. Control what you can control and go play ball. If we’re counting on fans motivating us in a stadium for an away game, they’re probably going to be booing us anyways right? I’m hoping we can get fans back here (at The Heights) that will fill the place and the students will be so loud that it will give us an advantage.

“That’s the most disappointing thing. When I first started here – I bet you right now if this was week one in a normal world – and god willing it will be – I bet we would’ve filled the place. We would’ve had all the students and city come out to watch the game and probably be loud, so, for a road game? At least we won’t get booed.”

Even if there were fans in Durham and the Eagles were booed, it sure as hell beats the alternative that other players and programs around the country are currently dealing with.

It’s game week people. We made it.