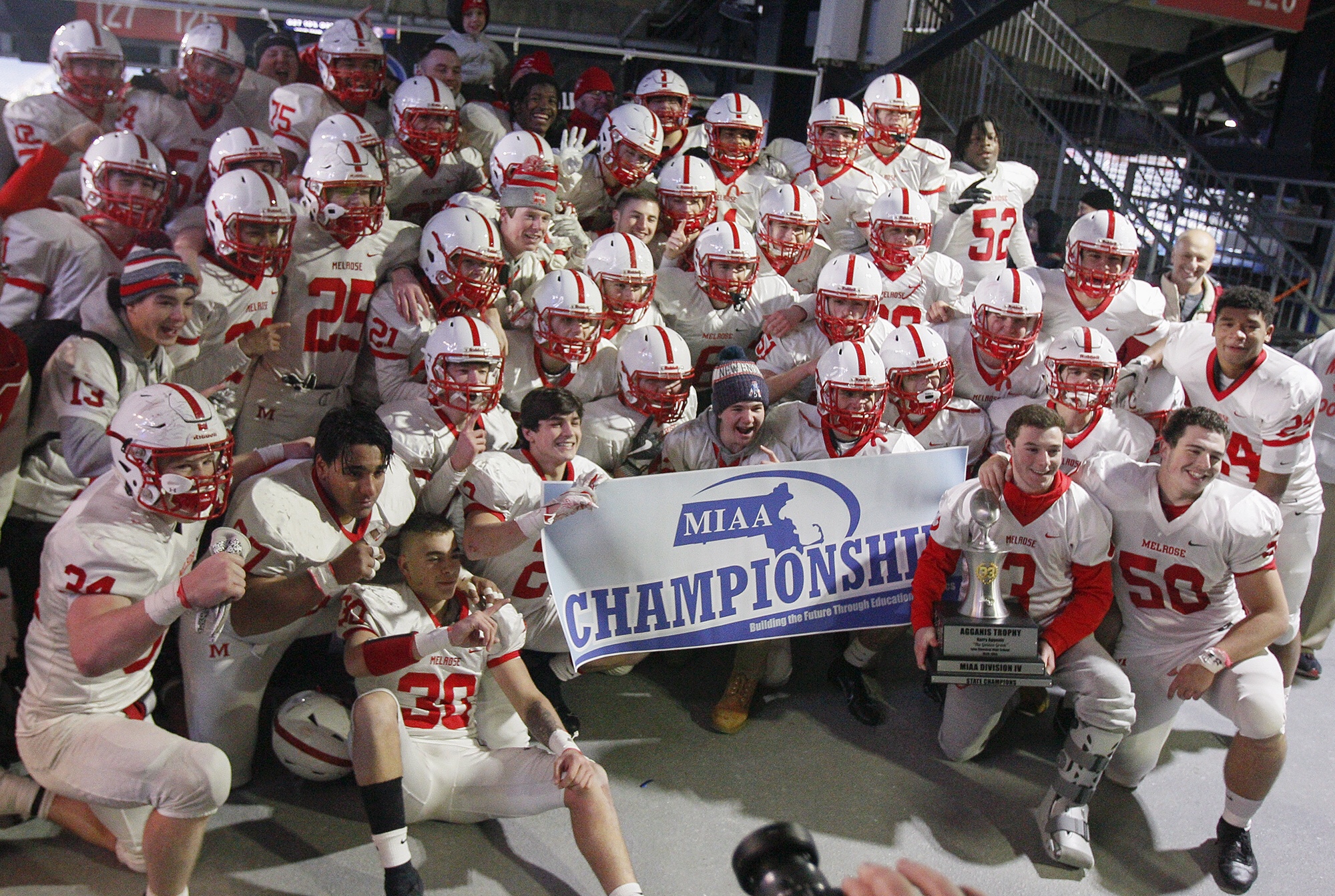 Just because the state has robbed players and coaches of an opportunity to play high school football this fall, that doesn’t mean we can’t still focus on the wonderful programs around Massachusetts.

Players, coaches, families and friends deserve to have their stories told and countless programs deserve to be highlighted, even if we can’t cover games on the field. So, New England Football Journal has decided to feature one program a week, while John will be interviewing one coach per week in our “Coaches Chat”, which you can catch live on Twitter.

For our first feature story, we decided to start with the defending Division 4 Super Bowl champs, the Melrose Red Raiders. The Red Raiders went unbeaten on their way to a state championship last year, and head coach Tim Morris feels for his players and staff as they won’t have an opportunity to defend their title.

“I think it’s been hard for everybody,” Morris said via a phone interview on Thursday. “Adults included. I know myself, since I was 10-years old I’ve been playing or coaching – and you’re talking 50 years now – so it’s just a weird time for us. The kids have been great as far as staying positive, but it’s tough. Not just because we can’t play football, but we can’t get in the weight room, we can’t really workout, but there’s a little bit of hope at least.

“Hopefully we can get going in February, that’s all the kids want right now is some hope.”

Returning quarterback Brendan Fennell echoed the same sentiments as his head coach via text message on Thursday as well.

“We miss playing on Friday nights with each other,” he said. “There’s nothing better than going through a full week of preparation for a team and executing it and getting the win.”

While there is hope for a less-than-ideal February season, it’s not a gurantee. So, the key for programs now will be keeping the morale up as they wait and see whether or not the people in positions of power continue moving the guideline goalposts.

“The motivation factor is big, just staying positive now that the MIAA has pushed our season until February,” Fennell added. “We still have something to look forward too and a date to be ready to go by working in the off-season.”

If and when Melrose does take the field, it won’t just be Fennell returning to try and help lead the Red Raiders to another winning season. AJ Norton-Jefferson and Frank Capaldo are two key pieces returning to help protect Fennell. Charlie Haggerty, Matt Hickey, Ryan Maher, Shea Fogarty, Matt Dussault and Liam Maher are just some of the other upperclassmen that will be relied on heavily this season.

“I think our strength is going to be with some of those skill guys coming back,” Morris said. “We’ve got to develop some lineman as well, but we were just really looking forward to playing this fall. If you give us any kind of season, we’ll try to do our best in the elements and go play winning football.”

Of course the one name that can’t be replaced is Bill Pesce. Pesce will eventually be heading to Westfield State, but his leadership after what he went through prior to the state title game a year ago with the passing of his father is a story that will be passed down for years in the program. There is leadership, and then there is a whole other level of getting guys to rally around you, and that’s a level very few high school athletes ever get to.

“Bill was an unbelievable leader and a better kid who led on and off the field,” Fennell said.  “He would go to war for anyone in that locker room and that is what being a leader is all about.”

“He was an excellent leader for us,” added Morris. “Everybody knew what he had been through, and that made his leadership better. He played hurt, he led us on offense and defense, came up with big plays when we needed them, and he’s just a very personable kid. He made everybody on that team feel special regardless of where they were on the depth chart.

“He’s a good person who went through some tough times with his family, but this was his family too and he really helped our team all around. He’s an example for anybody who goes through a death or any hard time to keep going and keep persevering.”

Whether or not the Red Raiders get to take the field this season is up in the air, and the Super Bowl title is now in the past but, one thing is certain, Melrose will be ready to go wherever and whenever they’re told to kick the ball off.

“Its a different team every year,” Morris said when asked if the team will still have a chip on its shoulder despite not being able to defend the D4 Super Bowl championship. “This is our team now. We talk about our past, but we don’t dwell on it. We just want to do the best we can this year with the guys we have. Billy Pesce isn’t walking through that door and Chris Cusolito isn’t walking through that door, this is our team now.

“Last year was great and it was great to win that, but we’re going to do the best we can this year week in and week out to just go out and play good football.”