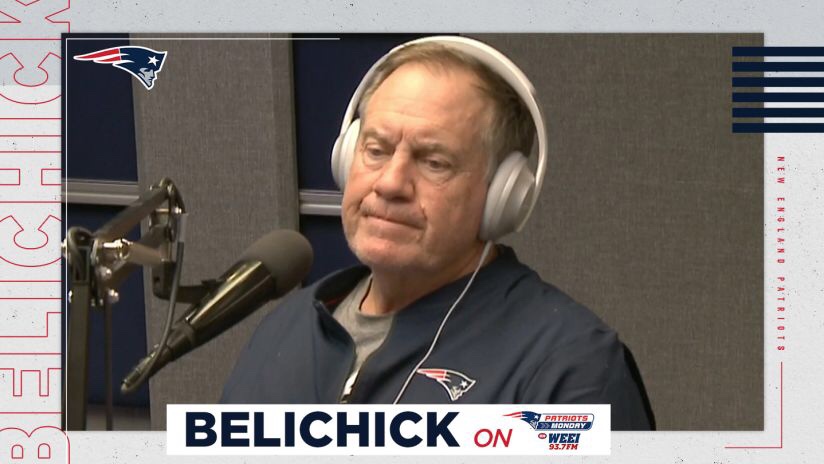 After another instant classic with the Seattle Seahawks on Sunday night, Bill Belichick was back meeting with Glenn Ordway, Lou Merloni and Christian Fauria Monday afternoon.

As always, it’s one of the more valuable pieces of radio in this area each week that sometimes doesn’t get the credit it deserves.

This week was a tough one for the entire Patriots organization as Bill Belichick’s mother passed away, and then roughly an hour before kickoff on Sunday the world learned that James White’s father had tragically passed away in a car accident while his mother was in critical condition in Florida.

Obviously, this was one of the first things the guys brought up to Bill, with Christian broaching the delicate subject, and Belichick’s answer regarding dealing with that type of tragedy in that position – as a leader of 53 other men – was poignant.

“We talked about it,” Bill said. “Those things unfortunately come up every year in one way or another. We’ve had players and coaches lose loved ones, and you know, injuries happen and so forth, it’s just part of life, we all live that in our lives at some point or another. Any time you have the amount of people we have with our coaching staff, all the support people, the players and so forth, it’s inevitable that you’re going to be dealing with some form of personal happiness – babies being born and thins like that – then there’s a lot of times unfortunately some sadness.

“As a team our hearts are sometimes filled with joy and sadness and – it’s just a heartbreaking situation for James – and all of our hearts and prayers go out to him and his family. Each situation is different and I’m not trying to say they’re all the same by any means, but, they frequently occur annually really. Some are maybe more tragic than others, but, I can’t think of a season as a head coach where somebody hasn’t gone through something that’s very emotional or tragic and it’s tough when that happens. It’s tough on them and it’s tough on the people that love and care about them.”

Things soon shifted towards football as Lou asked Bill how he thought the front seven did against Russell Wilson. Bill was complimentary of his defense, but just couldn’t resist continuing to heap praise on the quarterback who threw for five touchdowns against New England’s possibly overrated secondary.

“He’s just very instinctive and resourceful and he’s able to create and do things on the football field. It wasn’t that we didn’t have anybody for him at times, there was just a lot of open space. A couple times we just weren’t able to get close enough to him to get him even though we were sort of there, just wasn’t quite good enough. He does that to ya and just got to do a better job of coaching and a better job of executing in those situations. There’s very little margin of error with him.”

Each week, the interview will end with “Mercedes Benz Drive/Question of the Week” where Bill will pick the best drive of the week for his team and then answer a fan question. While the obvious answers could have been either the drive after Seattle made it 28-17 or the final drive of the game that ended at the 1-yard line, Belichick chose to go the humor route.

“I don’t know…Devin’s interception,” he said. That of course was in reference to Devin McCourty’s pick-six on the third play of the game.

Fauria followed with a question about Deion Sanders becoming the new head coach at Jackson State (if you haven’t seen his entrance to the introductory press conference do it, it’s unbelievable) and what advice Bill would have for him becoming a head coach for the first time.

In typical Belichick fashion, he dodged the question, but still managed to give us a little nugget to depart with.

“I don’t think I’m the right person to ask for that one,” he said. “I’ve never coached in college, so, I’m sure Deion will be fine. If he was going to ask somebody, I think he should ask Jackie Slater (Matthew Slater’s father), that’s Jackie’s alma mater. That’d be my advice, talk to Jackie Slater.”