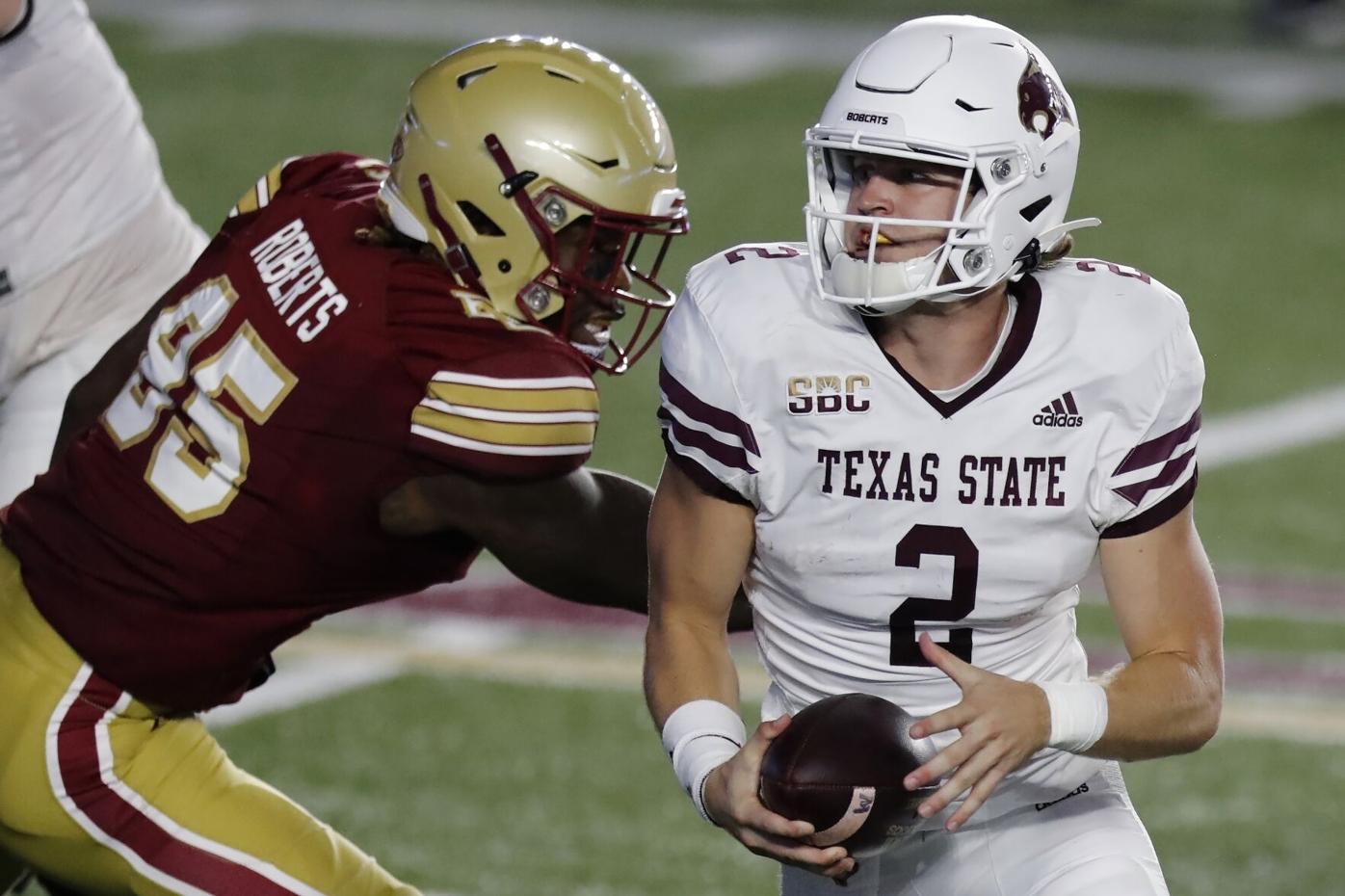 CHESTNUT HILL — The old saying goes that sometimes it’s better to be lucky than good.

Well, the Boston College football team was good when it mattered most in crunch time on Saturday night, but they also had quite a bit of good luck on their side as well in the first home game of the year at Alumni Stadium against Texas State.

Trailing by seven with just over three minutes left in a game they were favored by 17.5 points to win, BC was able to mount a comeback – thanks in large part to some terrible Texas State penalties – tied the game with just over a minute left then got a game-winning field goal from Aaron Boumerhi with three seconds remaining to steal a 24-21 victory.

“It was pretty awesome,” Boumerhi said of the final kick. “After how hard this offseason has been between surgery and then Covid, coming back from a second hip surgery and how that’s been…that was very special getting that kick, that felt awesome, it felt great. I can’t even describe the feeling. In the moment it’s just like…yeah you really can’t describe it unless you’ve been in it it’s so hard to describe.”

Quite a bit had to go right for the Eagles just to be in that position in the first place.

The offense struggled all night long (just 297 yards of total offense, 209 yards in punts), and Boston College trailed 21-14 with 3:15 remaining. After an Isaiah McDuffie sack on third down, Texas State punted the ball back to BC. Travis Levy called for a fair catch and ended up drawing a targeting call that gave the Eagles the ball at the Bobcat 48-yard line.

The Eagles were facing a third-and-long when quarterback Phil Jurkovec (26-31, 210, 1 TD, I INT) rolled to his right and ultimately gained a few yards before throwing the ball out of bounds. The play probably would have put BC in a nearly impossible fourth-down situation, but Jurkovec was pushed late out of bounds, giving the Eagles new life.

Jurkovec ended up hitting Hunter Long (9 catches, 81 yards) for a 5-yard TD in the back of the end zone a couple plays later and Boumerhi added a PAT to make it 21-21 with 1:11 remaining.

Texas State ended up going three-and-out in just 24 seconds of game time, and BC got the ball back at its own 33 with 47 seconds left in the game. Jurkovec proceeded to lead a methodical six-play drive, finding Long, Levy and Zay Flowers along the way to ultimately set up Boumerhi’s game-winning 36-yard field goal that split the uprights and made it 24-21 with three ticks left on the clock.

One kick off later and the Eagles stormed the field to celebrate winning at Alumni Stadium for the first time this season.

“Maybe we need to tell him it’s the fourth quarter and we need to score quick,” head coach Jeff Hafley said when asked what he saw from Jurkovec down the stretch (12-of-14 in the final frame). “He looked like a different player. I looked at him at the end before those two drives and just said ‘this is what we’ve talked about, go play ball man, don’t think, just let rip and he did and I’m proud of him. We need to get better and we will get better, but you can’t take away what he did at the end of the game.

“The whole offense truthfully, the staff, coach Cignetti, we struggled early and when we needed them the most they did an awesome job.”

To say the offense struggled early would be quite an understatement.

The Eagles opened the game with the defense forcing a punt and then the offense marched from it’s own 23 downfield in nine plays with CJ Lewis having a 19-yard TD catch called back for an illegal man downfield. A few plays later Boumerhi had a 47-yard field goal blocked.

Texas State answered with a nine-play drive that ended with a 1-yard TD run from Calvin Hill to make it 7-0 with 3:44 left in the first. After a three-and-out, Mike Palmer came up with an interception at the BC 25 off a tipped ball from Josh DeBerry and returned it all the way down to the Bobcat 5-yard line.

Four plays into the second quarter Jurkovec punched it in from 3-yards out to make it a 7-7 game. The Bobcats ended up going up 14-7 with just 59 seconds remaining in the half on a 6-yard TD catch from Marcell Barbee after the BC offensive line struggled to keep Jurkovec upright for much of the half.

A quick three-and-out for the Eagles to open the second half was followed by a 13-play drive that started at the Texas State 13 and ended with another Barbee TD on a 9-yard screen, making it 21-7 with 6:49 left in the third.

The Eagles got a huge response on the next drive as Jurkovec led a 12-play, 72-yard march downfield that ended with him again scoring on a keeper, this time from 3-yards out to make it 21-14 heading to the fourth.

Just before the fourth quarter Levy rallied his teammates around and made a passionate speech on the sideline as the team all held up the four fingers, started clapping and then congregated in a circle.

The teams traded five punts in the fourth quarter before Boston College ultimately got the ball on the Texas State 48 following the targeting call and began the furious comeback.

Many in the media (me included) severely underestimated how good and fast the Bobcats would be. The Eagles didn’t, but they still had to claw their way to a comeback victory. It wasn’t pretty by any means, but the Eagles are still 2-0, and the fight they showed late in the game on Saturday night when things looked bleak is what a real winning culture looks like.

“Obviously for the first half and most of the game we weren’t playing very well,” said Jurkovec. “They were doing some different things on defense like dropping out and, I was getting a little bit greedy I think trying to extend the plays and trying to make plays downfield instead of just taking what they were giving us and checking the ball down and moving the sticks forward.

“I’m just so proud of all my teammates. Boom making that kick – his hip’s been bothering him but he’s been grinding it out  and being clutch – all the offensive guys through it all, some of this possessions where I wasn’t playing well they were keeping me up saying we got this we’re going to get the ball back and go score. Then, the defense being clutch in those final possessions coming up big for us. I’m really proud of everyone on this team, I love this team.”