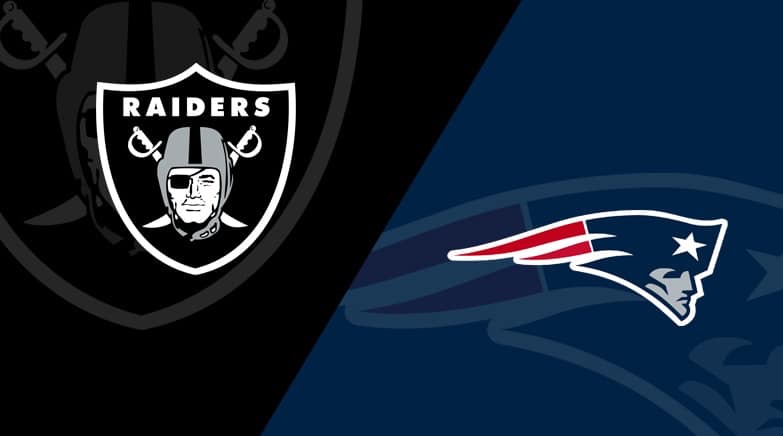 Opening Kickoff: The Las Vegas Raiders visit Gillette Stadium today to take on the Patriots. The Patriots and Raiders will meet for the 36th time overall and for the 33rd time in regular-season.

The Patriots hold a 19-15-1 series lead. They have a 2-1 record in the playoffs against Las Vegas. The Patriots beat the Raiders 33-8 in their last meeting in 2017 at Estadio Azteca Stadium in Mexico City.

The two teams haven’t played at Gillette Stadium since September of 2014. The Patriots won that game 16-9.

Here three offensive and defensive keys for the Patriots today.

3 Offensive Keys for the Patriots

1. Outflank them: Las Vegas is pretty basic on defense. What you see is what you get. Look for the Patriots to try to outflank them with motion and unbalanced formations. The Raiders are fast on defense so I would expect some misdirection as well.

2. Expect A Gap pressure: With David Andrews out, I would expect some double A gap pressure up the middle early by the Raiders in an attempt to take advantage of new center Hjalte Froholdt. Froholdt will have his hands full with Maurice Hurst Jr, Jonathan Hankins and Maliek Collins.

1. Run fits and gap control: Raiders running back Josh Jacobs has emerged as one of the best running backs in the NFL. The Patriots must do a good job in their run fits and control the line of scrimmage. If they don’t, Jacobs can make one cut and get into the second level quickly. The Patriots need to be sound up front today.

2. Match Up: As I mentioned in my scouting report of the Raiders, they do a lot with personnel offensively. The Patriots must match up and they cannot have breakdowns in the secondary otherwise Las Vegas will exploit them.

3. Banjo & Bracket Waller: Darren Waller has become one of the toughest match ups in the league. Jon Gruden does a great job of moving him around and getting him open. Depending on alignment, the Patriots will either “Banjo” him (LB/SS double team underneath) or “Bracket” him (Nickel/SS double team) Either way, they will have to be physical with him, re-route him and get two bodies on him.

Prediction: Patriots 31 Raiders 28: The Patriots proved last week that this offense can score. They should have no problem today moving the ball against a Las Vegas defense that has been pretty soft through two games.

The issue could be the defense. Can they bounce back after an abysmal performance last week in Seattle?

The Raiders will be tough to stop but I see the Patriots outlasting them and picking up a big early season win.