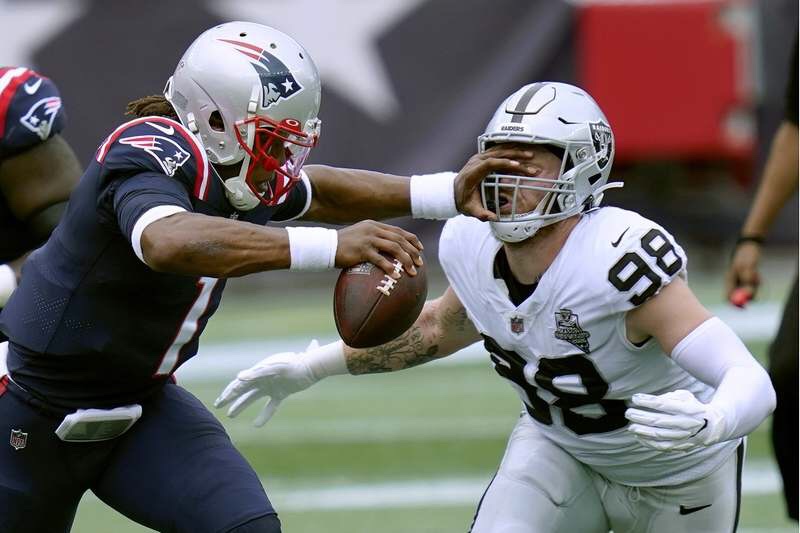 FOXBOROUGH — They don’t ask how, just how many at the end of the year.

It wasn’t pretty at times on Sunday afternoon, but the Patriots beat the Las Vegas Raiders 36-20 at Gillette Stadium to move to 2-1 on the season.

With David Andrews out the offensive line struggled to protect Cam Newton early, but, thanks to 117 yards from Sony Michel and three total touchdowns from Rex Burkhead along with a solid defensive performance, the Pats avoided an ugly loss before turning their attention to Kansas City next weekend.

“I thought it was a real good effort by our football team, I’m very proud of the way they competed all week,” Belichick said following the game. Bill opened up again thanking everyone for their support after last week’s trying time for him and his family.

“It was a tough week but, they really battled through it. The Raiders are a good football team. They’re well coached they have a lot of good players, a lot of talent and I thought we really stepped up and competed hard today.”

This one should have been over for all intents and purposes at halftime, but, we’re going to have to get used to some ebbs and flows with the Patriots this season unfortunately.

With just 34 seconds left in the first half the Patriots had all the momentum after Cam Newton hit Burkhead for a screen that went 11-yards and ended with Burkhead flying through the air and into the end zone to make it 13-3. The game felt like it was over there, but, a huge Stephon Gilmore pass interference call on the ensuing drive gave the Raiders life.

After a long reception for Hunter Renfrow down to the Patriot 1-yard line with nine seconds left in the half, Foster Moreau caught a 1-yard TD and Las Vegas stunningly cut it to 13-10 at the half.

The Raiders got the ball to open the second half, drove downfield but missed a 41-yard field goal, wasting the nine-play drive. New England needed to make Las Vegas pay and they did in the form of a 7-play, 69-yard drive that ended with a Burkhead 5-yard TD run to make it 20-10 midway through the third. Nick Folk added a field goal late to make it 23-10 heading to the fourth.

That drive and really throughout the second half the story was Sony Michel. Michel ran hard, dragged tacklers and looked as good as he has in a long time. JJ Taylor also added a nice boost from the backfield throughout the game as well.

“I thought the backs ran well,” Belichick said. “They made a lot of yards with their running either breaking tackles or cutting back and avoiding guys in the secondary, we got a couple long runs there. Rex, Sony, JJ, Cam had a good run for us, the receivers ran well, N’Keal after the catch, Julian, so it was all getting what was there and then they got more on their own with good running skills.

“The offensive line – we had some moving parts in there, shuffled things around a bit this week but, generally speaking we got a hat on a hat, we didn’t have any negative plays, we didn’t go backwards. Then, when we had a chance to break a tackle or get into space then the backs created some extra yardage on their own. Josh (McDaniels) did a great job mixing it up running inside and running it outside…I thought the players really performed well.”

The defense picked up the offense quite a bit on Sunday, and both Chase Winovich and Deatrich Wise Jr. were forces off the edge on numerous occasions. With the Raiders backed up in their own end zone, Wise Jr. flew around the edge, got to Carr and ended up recovering a fumble in the end zone to push it to 36-13 with 4:56 to go.

Las Vegas added one more late TD to Renfrow with under two minutes left to make it 36-20, but, it was over after the Pats recovered an onside kick.

“We got good contributions from all those guys up front,” said Belichick. “Chase, Shilique, D-Wise, Adam (butler), Lawrence Guy, Byron (Cowart), we had a lot of good plays there from our front. We have up too many drives, but, otherwise defensively there wasn’t really a lot of points scored. They had trouble converting on third downs, we did a good job on third down at the end of the game, so, there were some good things there to build on defensively, but 20 points is 20 points.

“We want to try and keep it to a little less than that.”

The first half was one to forget for the Pats. New England trailed 3-0 after one and could only muster two Folk field goals in the second to lead 6-3 before the Burkhead TD that made it 13-3.

Overall the numbers for Newton didn’t look bad but it was far different than last week. Cam was 17-28 for 162 yards and the one TD to Burkhead. Newton also had a brutal interception, but, also had a huge run late in the game for a first down to help ice the game.

As a team the Patriots ran the ball 38 times for 250 yards, showing a continued commitment to the ground game over the passing attack. Defensively, New England forced three turnovers, but, more importantly they were able to shut down the Raiders’ top weapon at tight end Darren Waller (2 catches, 9 yards).

No matter how the Patriots win games this year it’s going to look odd to us, simply because we haven’t seen a team win football games on defense or with a running game in 20 years. Last week’s game against Seattle will probably be an anomaly this season. Expect more of what you saw Sunday throughout the rest of the year, including against Kansas City.

The best way the Pats can stay with the Chiefs next week will be to keep their offense on the field, which means Sunday’s 23-point win over Las Vegas provided a perfect tuneup for the offensive line and backs heading into next week’s huge matchup.

“Looking forward to getting started again this week, but, definitely going to enjoy this one,” added Belichick. “Got to give all the credit to the players and the assistant coaches. They did a great job with the game plan and we competed. We did enough things to deserve to win, so, we’ll take it.”