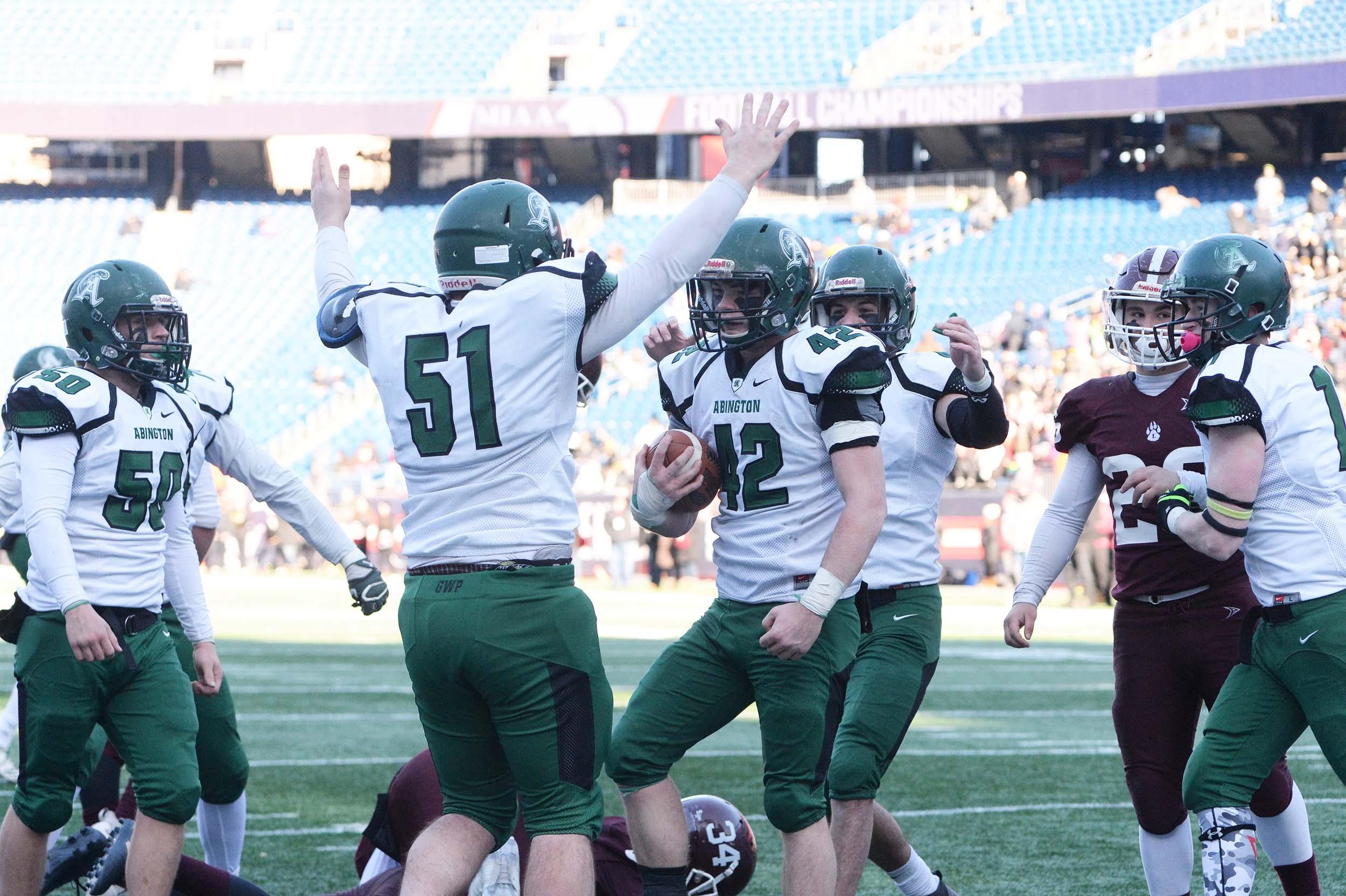 We’ve survived a month without high school football here in Massachusetts, but, it hasn’t been easy.

We here at New England Football Journal have tried our best to keep the high school game relevant in the months it should be with John’s weekly Coaches Chat and our featured team of the week as well. The response has been phenomenal and we know there are tons and tons of people who miss being at various stadiums on chilly Friday nights as much, if not more than we do We’ll continue to try and make sure the high school talk doesn’t stop throughout the winter.

With that being said, it’s time to get to this week’s featured team – the defending Division 7 Super Bowl champion Abington Green Wave.

I spoke with offensive coordinator Ed Reilly this week and there were quite a few things that stood out during our conversation. First and foremost was the fact he told me head coach Jim Kelliher delvers oil during the day, so he takes over some of the media responsibilities. It’s pretty cool to see two coaches with a good enough relationship where one trusts the other enough to speak on and promote the program regularly, some coaches want to make sure they’re always at the forefront and delivering the message themselves.

“I believe coach Kel is entering his 46th year and my first year of varsity was 2001, so, we’ve been together for a while,” Reilly said. “It certainly makes things a lot easier, especially now. Coach Daly (defensive coordinator) has been here probably five or six more years than I have, and even our freshman staff has been with us for a while. It’s helpful because we’re all on the same page and we all get along great.

“We have our system in place and the kids know it.”

Coach Reilly and I also talked about how strange it is not having a season right now and how difficult it’s been for kids to adapt. He also touched on how strange a certain day in November will be this season without the game of football.

“It’s rough,” Reilly said. “Especially for the seniors.  On one hand we’re happy that we might have a season – hopefully we’ll have one – but on the other hand it’s been weird. It’s going to be very weird on Thanksgiving not knowing what to do. We have too much respect for Whitman-Hanson to ever take that day off no matter what position we’re in. That day hasn’t lost its luster at all to me.

“The kids’ attitudes have been great though. They’ve been rolling with the punches and there’s been some workouts and stuff like that, but, we all miss it.”

Whenever the Green Wave get to roll on to the field this season there will be quite a few seniors leading the way.

‘I’m sure I’m missing some other kids and I hate missing kids,” he acknowledged. “But, we usually just try to keep it rolling as best we can each year. All those guys are going to be relied on to take the jump to the next level for us or continue being a factor like they were last season. I’m sure we’ll have some underclassmen that surprise us as well.”

If you haven’t noticed, we’re going through the 2019 state champions for our first set of features this season. Each week we’ve asked coaches if they believe their team will have a chance to defend a state title, and how hard it would be to get them pumped up for a schedule that could ultimately lead to nothing if there are no playoff games or league champions decided. So, what approach are the D7 champs taking?

“Whether we’re defending or not, I don’t think it makes too big of a difference,” Reilly said. “We don’t talk about it too much. We already got the kids their rings and did that stuff over the summer so, in essence we turned the page.

“We lost a lot of very good players, so, we’re going to need kids to step up including the sophomores and juniors. If they do – and hopefully they learned a lot from the success of the seniors last year – then we should be able to have another successful season.’