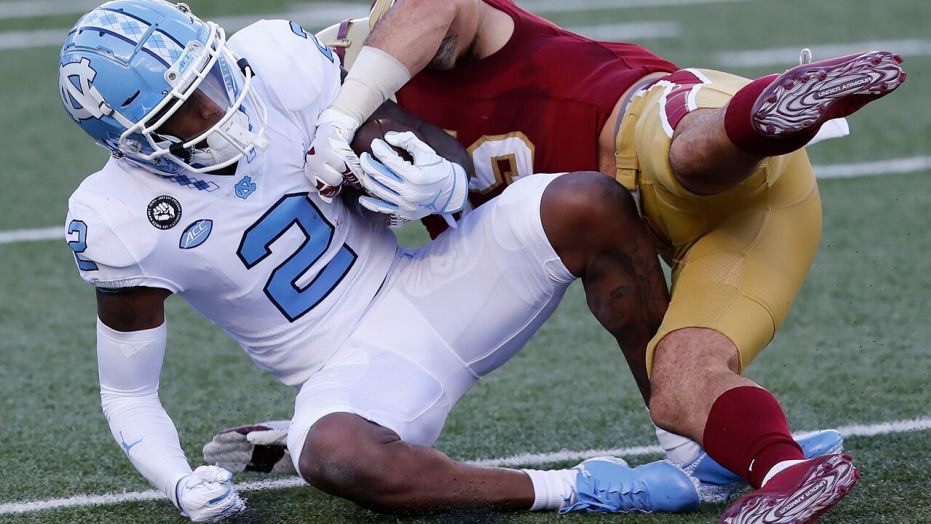 That’s all that stood between Boston College and forcing overtime against the 11th-ranked team in the country on Saturday night.

Trailing by eight with a little over five minutes remaining, Phil Jurkovec led the Eagles downfield and eventually found CJ Lewis for a touchdown to cut the lead to six. Unfortunately, the ensuing two-point conversion that would have forced overtime was picked off and ran back the other way sealing North Carolina’s 26-22 win.

The Eagles entered the nationally-televised game as 14.5 point underdogs on their home field. The result wasn’t what they wanted, but, if there was any doubt about what coach Jeff Hafley and his staff are building over at The Heights, a lot of questions were answered with the effort at Alumni Stadium on Saturday.

“They left it all out there,” Hafley said. “You saw our kids, they had so much energy and so much juice – especially in that second half with the way they played and perfumed – we just came up a little bit short there at the end.”

The Eagles trailed 24-16 when Phil Jurkovec – who completed 37 passes, tying for second in BC single-game history with Frank Harris (37 versus Army in 1968) and setting an Alumni Stadium record – took over at the BC 31-yard line.

The first big play of the drive came when Pat Garwo converted a 4th-and-1 near midfield. A long play to Zay Flowers set BC up deep in UNC territory and a Lewis TD catch in the left corner of the end zone appeared to give BC a chance to tie, but it was called back for a weak OPI call. Moments later facing a 3rd-and-22 Jurkovec found tight end Hunter Long for a touchdown (9 catches, 96 yards) but, that was also called off on hold. Facing 3rd-and-32 the Eagles caught a huge break on a Tar Heels pass interference call.

Finally, with just 45 seconds remaining Jurkovec hit Lewis on a slant for a 6-yard TD to make it a 24-22 game. After a timeout to talk things over, Jurkovec was ultimately picked off by Trey Morrison at the goal line and he ran it all the way back for an additional two points to make it a four-point game.

The Eagles nearly recovered the onside kick to give themselves a final chance, but UNC came out of the pile with the ball, ending any hopes of an upset.

“I don’t think they flinched,” Hafley said when asked how his guys responded to the spot of this game, being on national television against a top-15 team. “That’s what I love about this team. Doesn’t matter who we play, who it’s in front of, if there’s anybody in the stadium. Whoever lines uo against us we’re going to go as hard as we can and we’re not going to back down and we’re going to go at them for all four quarters.

“It doesn’t surprise me if you look at what they’ve done since they’ve gotten here.”

This one was as emotional, physical and chippy as it gets from the time the teams took the field. Boston College came out of their tunnel and UNC followed from across the field, but, it wasn’t your average tunnel run. UNC took the field and immediately started chirping the Eagles, running towards them a bit as they took the field. That was only the beginning.

With Boston College trailing 7-0 after a 24-yard TD catch and run from Khafre Brown, the Eagles faced a third-and-medium deep in UNC territory. Hunter Long went up for a pass over the middle and was absolutely smoked. With Long down the UNC bench appeared to be cheering, prompting Coach Hafley to begin screaming at the Tar Heels. Then, Hafley pulled his entire team together and began to rally the troops.

“I promised my guys that I would always have their backs,” Hafley said. “At that moment, I had their backs.”

The Eagles acknowledged that they were expecting a dog fight coming in, but that incident only added fuel to the fire.

“We noticed that and we take it personally,” said defensive end Brandon Barlow. “One of our guys is down and the other team is cheering, that’s just fuel to the fire. We were juiced up after that. We knew what type of game this was going to be going in, but, that just reinforced it for us to go even harder from there on out.”

After the delay – where Jurkovec didn’t leave Long’s side once as he was being evaluated by doctors and trainers – Aaron Boumerhi hit a 35-yard FG to make it 7-3. UNC QB Sam Howell was good all day (14-26, 225, 2 TD’s) and on the ensuing Tar Heel drive he was outstanding. Howell avoided pressure several times to lead his team downfield and eventually got a 1-yard TD run from Javonte Willams to push it to 14-3. The Eagles’ inability to get off the field on third down during the first half was jarring and UNC continuously took advantage.

Boston College answered with another strong drive, but, again had to settle for a 27-yard field goal to make it 14-6 with 12:34 left in the half.

Two plays later following a miscue on the kick off by UNC forcing them to start at at their own 4-yard line, Brahmin Muse came flying down from the secondary on a blitz and hit Howell, knocking the ball into the air where Brandon Sebastian picked it off, setting BC up at the UNC 5-yard line. Jurkovec hit Travis Levy on 3rd-and-goal for a 5-yard TD pass to make it 14-13.

While some media members couldn’t see or hear it up in the press box, it was relayed through social media that Hafley could be heard screaming “I love this team” as they headed to the locker room and the team roared in response.

BC and UNC traded punts and penalties throughout the second half (96 total yards in penalties for UNC, 110 for BC), and the Tar Heels made it a 24-16 game with a 35-yard field goal midway through the third quarter. On the surface that doesn’t sound too bad, but, the drive was assisted by the Eagles defense racking up 45 yards worth of personal foul penalties on three consecutive plays.

“Those are unacceptable,” Hafley said. “Can’t have late hits. I want to be aggressive and I want to toe the line, but, we’ve got to do it within the rules.”

With 5:46 left in the this quarter and after BC had dangerously punted the ball back instead of attempting a 4th-and-1 sneak with Jurkovec – who scored two different three-yard TD’s last week – near their own 30, the Eagles caught a break as UNC backed themselves up with penalties then eventually missed a 47-yard field goal, setting up the wild final drive.

There is no such thing as a moral victory in football, but, the Boston College fan base should be thrilled with how much fight this team has showed so far this season. It may not win you football games right away, but, there is a grit and determination with this new look BC program that doesn’t appear to be going away anytime soon.

‘I don’t know if we proved a whole lot to ourselves because we knew we could do it, we can play with anyone in this conference, that’s really how we feel,” added Jurkovec. “So, with UNC, they’re a good team but we thought we could play with them and beat them.

‘I’m very excited for our future. I love the way that we fought. We will never stop playing. Everybody loves each other and plays for each other and it’s hard not to really love this team.”