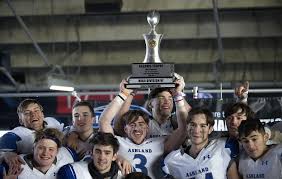 Instead of being in the thick of another title chase, the Clockers – like many others – are in a state of uncertainty right now. Other districts have allowed teams to begin some workouts, but Ashland isn’t one of them and the lack of consistency around the state is posing a disappointing problem.

“It’s been challenging, kind of like none other,” MacKay said of this season in a phone interview on Wednesday. “It’s a different challenge that we’re all dealing with. I would say the most difficult part has been each district has kind of been its own entity. Kids can see that Wayland and Milford are working out and getting some football activities in and Ashland can’t. Trying to be able to stay connected with the kids…that’s the one thing that’s been bothering me the most.

“You can’t really meet with them, and when you meet with them you’re masked and you’re six feet apart. You’re really losing what football in particular is all about and connecting with kids.”

One of the most fun things about covering Ashland’s run to a title last season was seeing how much support there was behind them. Ashland is clearly not the biggest town, but, playoff games at Grafton High School and Gillette Stadium were a sea of blue and red. To say those moments are missed right now would be a huge understatement.

“Fans are a big part of winning and Ashland High School football,” said senior Gryffin Frink. “A big part of last season was dedicated to past teammates and people from our community. Everything we accomplish is because of our hard work and the support we receive from our town and our family and friends. Playing without fans may feel like a different game.”

“That’s what part of being a small town is,” added MacKay. “Everyone rallies behind you and our community certainly propelled us to the special season last year. That’s not just solo to Ashland, there are a lot of places like that, there’s a big hole in everyone’s heart on Friday night’s in the Northeast right now. That’s definitely what they’re going to miss the most.”

Those waves of support and admiration haven’t swept over the Clockers again yet this season, but there’s some hope for February.

“There’s no reason why I wouldn’t be optimistic about trying to build it for the kids,” said MacKay. “You see other states that are doing it successfully. I’m not sure what it’s going to look like, whether you have X’s on the sideline where people need to stand, or, masks and gloves. The political answer is I’m really, really optimistic for it and we have to prepare that way.

“I just always fall back on, why can other people do it successfully? Even states that are worse off than ours. We’re still having meetings with them. At this point everyone is “Zoom’d” out though, right? It’s nice to say “hey how are you doing?” but, it’s just not very personal at this point. Are they doing stuff on their own? Sure. We’re all balancing a fine line of what’s enough, what’s not enough and it’s just…get me back to the real world, you know what I mean?”

Whenever the Clockers do hit the field again, MacKay likes the balance he has with young and old despite losing a ton of talent from last year’s team.

Running back Eddie Lopez (1st team all TVL), Frink (MLB, 1st team all TVL) are the two biggest returners for Ashland. Tackles Dylan Drozek and Sean Harding and then “just a bunch of rising very good players who were stuck behind extraordinary players” according to MacKay.

“We have a great balance of inexperience,” Mackay said with a laugh. “When you graduate 24 kids off a state title that’s going to happen, especially in a small school. We’ve got a great balance of kids and a lot of juniors and seniors who will be playing this year.”

Now that we’re in mid-October and the opportunity to right the wrong that was not having a season this fall is gone, the hope for a season this winter is what’s driving kids to get better this fall.

“Being a senior, we have found ways to prepare ourselves even during this time,” added Frink. “If there is a season in February, it will definitely feel different from past seasons. We will continue to keep the same mindset and keep working to prepare. Whether it is weight training, conditioning, or mindset meetings to prepare mentally and to set and view our goals.”

If for some reason we are unable to have football in 2020 or 2021, Frink and the rest of his teammates hope their legacy lives on forever, even if they’re robbed of an opportunity to go out on their own terms.

“If for some reason, there is no season, I want the class of 2021 to be known as hard workers and kids who were ready to go out there and leave everything on the field,” he said. “Our class didn’t get the chance to show how dedicated we are and how much we want to compete.”