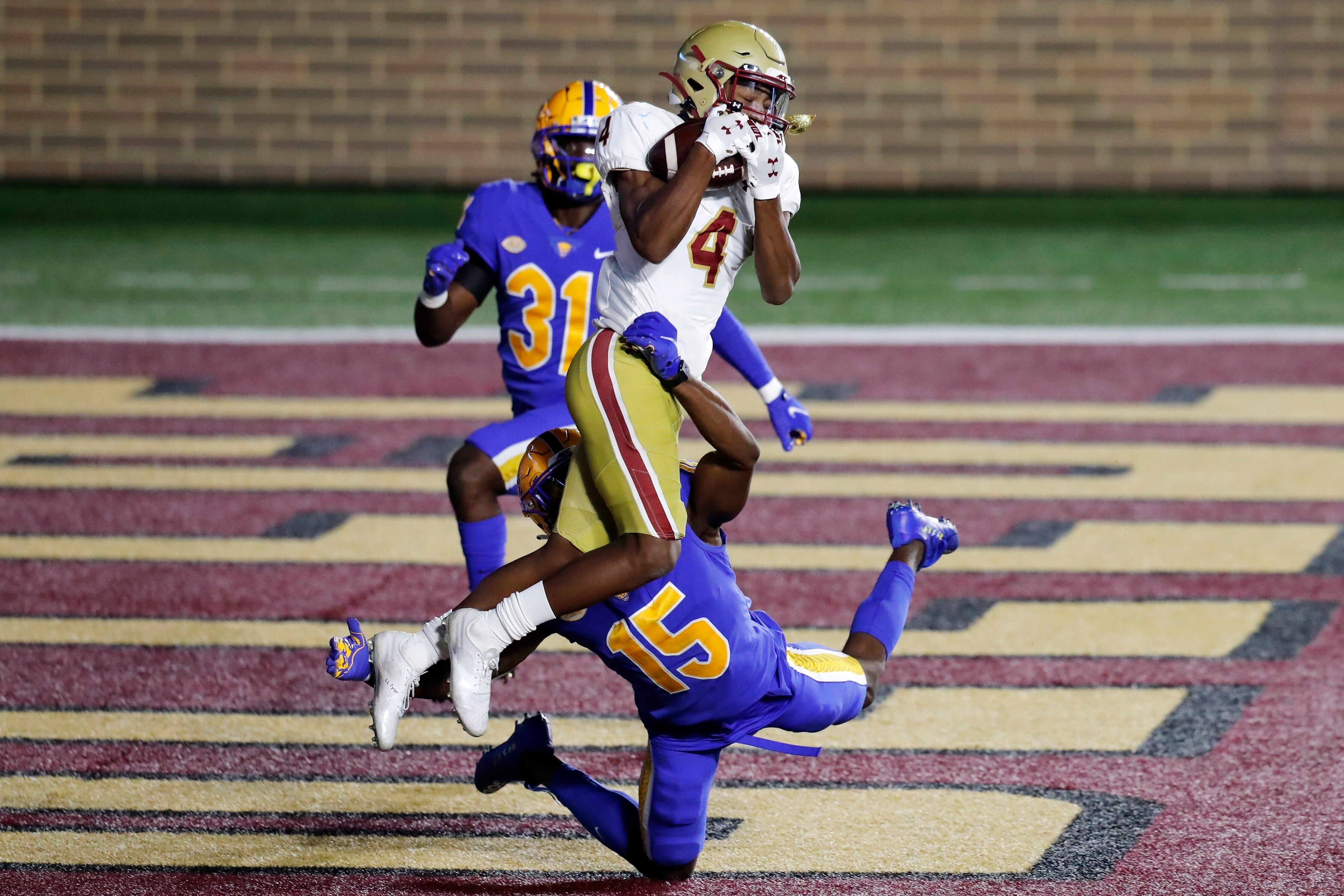 If you still don’t believe that there is a change sweeping over the Boston College football program – the “Jeff Hafley effect” some may call it – then you haven’t been paying attention.

Pittsburgh kicker Alex Kessman booted a 58-yard field goal with 40 seconds left to tie the game at 24 at Alumni Stadium on Saturday night. After BC kicker Aaron Boumerhi missed a 52-yarder at the end of regulation, Eagles quarterback Phil Jurkovec hit Zay Flowers for a 25-yard TD on the first possession of overtime and Boumerhi added the extra point to put BC up by seven. Pitt responded with a touchdown of its own, seemingly sending the game to double overtime.

What happened next stunned everyone lucky enough to be in the press box or on the field and everyone watching at home…Kessman shanked the extra point wide right and gave BC a stunning 31-30 win.

Boston College (3-1, 2-1) stormed the field as the kick sailed past the right upright, with players and coaches running in every direction, arms flailing. The win was just the latest example of how resilient this new look Eagles program is. Since the Duke win, Boston College has been in games decided by three, four and one point.

“Very proud of our guys, the resilency they showed,” said Hafley. “We certainly didn’t play our best. Penalties probably accounted for 17 points in that game which was self inflicted, I’ll take responsibility for that and I’ll clean it up. At the end of the game it looked like Pitt had momentum heading in (to overtime), and you just look at the resiliency of our players, and how much they love each other and how much they don’t flinch.

“They never point a finger. With all the sloppiness, I just couldn’t be more proud and it was fun to enjoy the locker room with those players because they deserve it.”

Jurkovec became the first quarterback in BC history to have three 300-yard passing games in his first four starts. That’s not all, as Jurkovec now has the most passing yards (1,181) through four career games in Eagles history as well. Meanwhile, Flowers tied the single game school record with three receiving touchdowns.

“It means a lot,” Jurkovec said of the win over the team he grew up watching as a Pennsylvania native. “I grew up watching Pitt, I’ve got a lot of respect for them. To be able to get the win in that fashion, it just means a lot. I really love playing with these guys. These games are coming down to the wire but, through it all we stick together.”

“It started way back like last spring,” Flowers added on the connection with him and ‘Thrill’ Jurkovec. “We started connecting and talking, and then it really started coming together after we got back from quarantine break. That’s when we really built a connection.”

From there the offense struggled, punting three more times in the third quarter while Pittsburgh cut it to 24-21 on a 4-yard TD run from Vincent Davis. During the march Pitt quarterback Kenny Pickett (25-48, 266 yards, 3 total TD’s) was injured and had to come out for the final two plays of the drive, but, he ultimately returned and finished the game.

Arguably one of the most underrated players on the BC roster so far this season has been punter Grant Carlson. Carlson racked up 306 yards in punts on Saturday night including four inside the 20. Carlson came up with one of the biggest plays of the game early in the fourth quarter when he pinned the Panthers inside their own 1-yard line.

Two plays later, Josh DeBerry picked off Pickett at the 15. Jurkovec was strip sacked three plays later, but, it’s hard to ignore what Carlson has meant this year.

“He totally changed the game, and he’s done it multiple games now,” said Hafley. “He flips the field, his hang time is ridiculous. They have great returners, I mean…that guy deserves a game ball this game. It’s hidden yardage. I can’t say enough about how well that kid has punted and we do not win the game without him.”

The teams traded punts and Pitt had another possession that began at the BC 45 with 6:29 left in the game. The Eagles defense forced a turnover on downs with 4:54 remaining, but, the offense went three-and-out in less than a minute, and Pitt took over at its own 38.

Brandon Sebastian was called for pass interference on 4th-and-7 to extend the drive to the Eagles 31, and then Max Richardson appeared to end the game with a sack for a 15-yard loss, setting up 4th-and-20 and the 58-yard attempt for Kesssman who stunningly made the kick after a few misses throughout the evening from shorter distances.

The Eagles ended up running an outstanding two-minute drill from their own 25 in the final 40 seconds, but Boumerhi couldn’t win it in regulation like he did against Texas State.

Boston College trailed 7-3 after one quarter after Boumerhi hit a 25-yarder early, but, Pickett punched in a 1-yard keeper late in the frame after converting a 4th-and-3 earlier in the drive. BC had forced a 4th-and-8, but, jumped offside and gave the Panthers an opportunity to extend the sequence.

Boston College took that lead into halftime, their first halftime lead since the Duke game (7-6).

All eyes now turn to a very winnable, but difficult game at Virginia Tech next Saturday night (8 P.M.). The Hokies are coming off a tough loss to North Carolina and will surely have revenge on their mind after losing in Chestnut Hill last season too.

Despite all that, Hafley, his staff and Jurkovec have Eagles fans believing that they’re in every game, and it’s been a long, long time since that’s been the case.

“Our mentality is, it’s about the process,” Hafley added. “It’s about us. We’re going to go attack as hard as we can and stick together, and we’re going to win the fourth.”