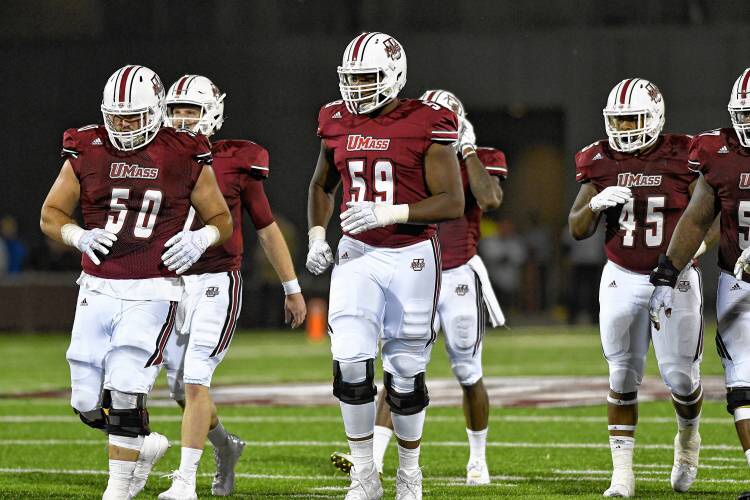 It is no secret that for the UMass football program to improve, they will need to play better along the offensive and defensive lines. It was a struggle for the Minutemen in the trenches last season.

If there was one bright spot for UMass after last season, it was the improved play of their offensive line. First year offensive line coach Jim Jackson did a tremendous with this unit and with a year of experience under their belts in the system, this group is poised to lead the Minutemen offensive offensive attack.

Left tackle Larnel Coleman anchors this unit. The Malden native has good size, is athletic and is a terrific pass blocker. Coleman was also chosen as a captain by his teammates.

The return of center Jaylen Larry helps. Larry missed nine games last season. He will have to beat out junior Dalton Tomlison who started for Larry last season and did a good job. Joe Horn is another player to watch at center.

He will be sandwiched between guards Helber Fagundes and swing tackle Michael Sullivan who could play right guard or right tackle. I coached Michael for a year in high school. He is a terrific run blocker at the point of attack and has developed into a good pass blocker. He offers tremendous versatility. JUCO transfer Reggie Marks could also be in the mix to start at guard.

Sullivan, Senior Bryce Wade and Redshirt Junior Brian Abosi will battle it out for the right tackle spot.

On paper, this group is plenty deep and they will be counted on to pave the way for JUCO running back Ellis Merriweather and senior Cam Roberson as the Minutemen will emphasize the ground game more early on.

Walt Bell and his staff also added several freshmen with size in recruiting so the cupboard will be well stocked upfront for years to come in Amherst.