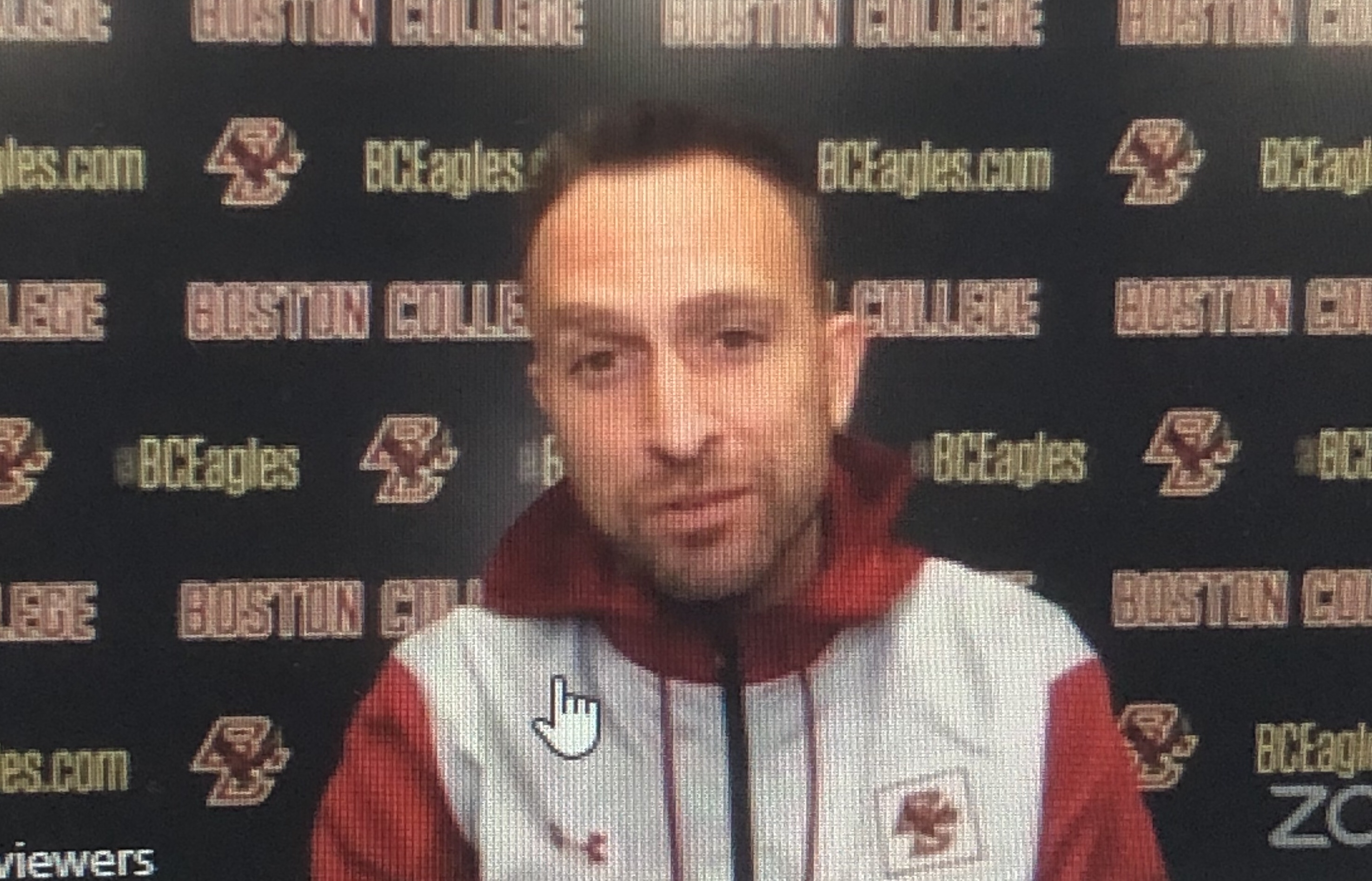 Hard to believe we’re approaching the fifth game of the season already, but, here we are,

Before we look ahead though, here’s a look at everything else you need to know about the BC football program heading into another huge night on Saturday:

FINAL THOUGHTS FROM THE PITT WIN

The 31-30 OT win over Pitt might go down as one of the most memorable in the Jeff Hafley era when it’s all said and done.

“Ton of respect for Pitt like I talked about this week,” Hafley said in his post game press conference Saturday night. “They battled back, we battled…those kids played hard. I have a ton of respect for that team, we just beat a very good football team. I’m proud of the way the kids battled and the resiliency they showed because we certainly didn’t play our best.

“At the end of the game it seemed like Pitt had momentum going in (to overtime) and you just look at the resiliency of our players and how much they love each other, how they don’t flinch, how much they never point a finger. So, with all the sloppiness I just couldn’t be more proud.”

Both Phil Jurkovec and Zay Flowers had record setting nights against Pitt, which turned into quite a few accolades during the week.

Flowers (6 catches, 162 yards, 3 TD’s) tied the single-game school record for receiving touchdowns with three and was named ACC Wide Receiver of the Week for the second time this season, becoming the first Eagle to win the award twice in one year. Flowers was also named to the Biletnikoff Watch List this week too, the award given to the best receiver in the country. Ironically enough, Flowers had actually talked about wanting to be in that discussion on Tuesday and then had his name announced on Wednesday.

The speedster has exploded on to the scene after being under utilized last year, and he credited working out with a well-known NFL receiver and QB Geno Smith for some of his success.

“The last like two years I watched (Antonio Brown) a lot, and I worked out with him when I was home. So, I saw like every day in person he was just teaching me stuff about running routes and being able to catch the deep balls.”

Meanwhile, Jurkovec (19-35, 358 yards, 3 TD’s, 1 rush TD) became the first QB in BC history to throw for 300-plus yards in three of his first four starts. Jurkovec also now has the record (1,181) for yards in school history through his first four career games.

Jurkovec was named co-ACC QB of the Week and the win was even more special being a Pennsylvania native.

“It means a lot,” he said postgame. “I grew up watching Pitt. I’ve got a lot of respect for that them. To be able to get the win in that fashion, it just means a lot. I really love playing with these guys. These games are coming down to the wire but, through it all we stick together.”

Yup. You bet. Grant Carlson has been an absolute weapon for Boston College this season, and on Saturday he was enormous for the Eagles in the win over Pitt. Carlson had 306 yards of total punts and even managed to pin the Panthers INSIDE their own 1-yard line at one point in the second half.

Following the win I had the privilege of asking Hafley the first question (mini humble brag, it is what it is) and I brought up Carlson’s performance this year, asking what exactly he’s meant to the team.

“I appreciate you saying that, because most people would probably ask about Phil or someone else, but, you asked about a punter that totally changed the game,” Hafley said. “He’s done that for us in multiple games now. He flips the field. His hang time is ridiculous. (Pitt) had great returners…I mean, that guy deserves a game ball. It’s hidden yardage and it’s so cool you brought that up, I can’t say enough about how well he has punted.

“We do not win the game without him today.”

FIRST TIME IN A LONG TIME HEADING OUT ON THE ROAD

After three straight home games the Eagles are heading out on the road for just the second time this year. For coach Hafley, the odd start times are making it difficult to find his exact pregame routine, but it’s coming along.

“I’m trying. I think I’m getting better at it,” he said. “I try and loosen up with the same guy and throw the ball around a bit with the same guy. I know what time I talk to the refs before the game now. It’s still weird for me, not coaching a position in pre-game. I usually have a ball in my hand to keep myself busy, and I’ll throw the ball to the DBs and wide outs. I’m getting a hang of it, but we haven’t had a game at the same time yet. I probably still have to get better at it, I’m working on it.”

As for the players, there’s a certain level of excitement taking the show out on the road after positing up at Alumni Stadium for three straight weeks. But, there is also a question of whether or not all these odd starting times are messing with routines, especially when heading out on the road.

“Every week we’re just coming out and trying to get better,” said tight end Hunter Long, the leading pass catcher for all tight ends currently in the nation with 31. “I feel this week more than any of the previous weeks we’ve been the most locked in as a team on offense and defense. I think we’ve had a great week of practice. You feel the energy, you feel the leadership from the older guys, it’s been a great week for us.”

“It’s fun to play on the road,” added Jurkovec. “Hopefully they have some fans there and they’re loud.”

WHAT TO EXPECT FROM THE HOKIES

Running, running and more running. The Hokies are the No. 3 rushing offense in the country, and the Eagles know all to well just how good two of the backs in particular are.

Last season in the Friday the 13th nightmare game against Kansas, Khalil Herbert torched Boston College for 187 yards and a TD on 11 carries. Raheem Blackshear is also a threat out of the backfield. Blackshear is a red-shirt junior who transferred from Rutgers and had nine catches for 130 yards against the Eagles last season.

“They have two really good backs, I believe both of them are transfers,” Hafley said this week.  “#21 and #6. #21 to me is a pro back. He’s a special player, breaks a lot of tackles, has speed, returns, so really talented. I believe they score 43 points per game and run for 300 yards per game, which are like video game stats, I don’t think I’ve ever coached against 300 yards rushing per game before.”

Penalties and third downs have been a continued issue for the Eagles this year, although, Pitt was just 4-18 on third downs last week. Still, getting off the field and not hurting yourself is going to be key if the Eagles want to move to 4-1 this weekend.

The Eagles still had seven penalties last week for 69 yards – some of them just terribly timed on third downs – and know they need to clean it up. Hafley takes a much different approach to fixing that problem than most BC fans are accustomed to though.

Hafley said he doesn’t get on guys during the game usually, unless a certain penalty is just too inexcusable to overlook.

“I get on them during the game about penalties, foolish penalties,” he said. “If a guy gets two PI calls, I’ve been around DBs my whole life, you get into those funks sometimes where the flags don’t go your way. You’ve got to keep your confidence and fight through it. The ones I’m not okay with are the mental ones, where guys are jumping offsides on a 4th and 8, or jumping off sides on 3rd and 1. We constantly talk to them about it and show them on tape, we show them other teams doing it on tape.

“Then, we put them in positions where we give them the hard count, and if they jump we take them out. We’ll continue to work on it, I think what you’ll see is we will continue to get more comfortable within everything we’re doing. There’s no time to panic about it. I’m not going to get on a guy if he makes a mistake physically on the field, but if a guy isn’t doing his job and staying onside and has a foolish penalty, that’s not okay.”

As for continuing to get better on third down, safety Jahmin Muse had an easy answer.

“It’s a mindset,” he said. “You’ve got to have a different mindset than you do on first and second down if you want to be good on third down.”

The Eagles are stunningly 11-point underdogs on Saturday night. With their last three games decided by three, two and one point, it’d be stunning to see the Hokies run away with this one. Virginia Tech has been banged up in the secondary and just lost a shootout against North Carolina last Saturday.

Jeff Hafley and his staff have played the disrespect card at times quietly this year, and it’ll be another golden opportunity under the lights at Lane Stadium to continue making a statement to the ACC and the country.