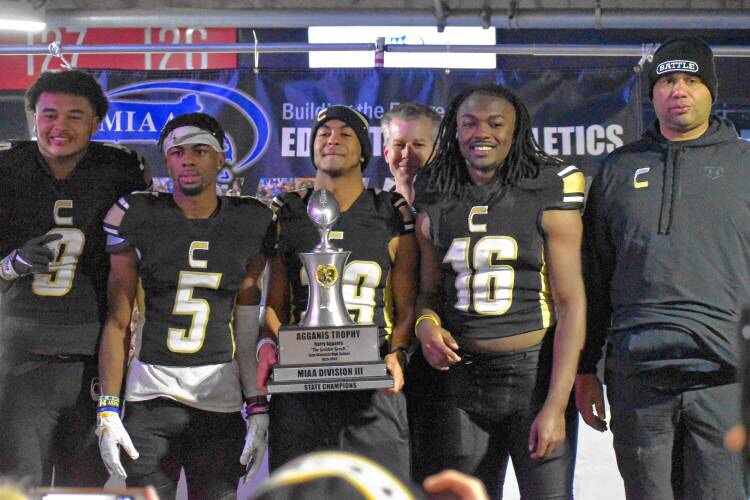 While programs continue to struggle with a lack of direction from local decision makers (yes, I’m still on this), the defending Division 3 Super Bowl champion Springfield Central program is in an even greater state of uncertainty than they were before.

It was recently announced that Springfield Public Schools would be temporarily pausing all athletic events and practices for two weeks after a positive Covid test in the district.

Springfield Central had just begun ramping up some offseason work trying to prepare for a less-than-ideal February season when news came down.

“It’s been tough,” said head coach Valdamar Brower in a phone interview Friday morning. “We’ve all been conditioned for so long to be doing a certain thing this time of year, and now we can’t. We started having kids do some stuff here and there, but, then we got word that there’s a two week pause. Other districts can do football stuff, some can only lift, some can’t do anything. It’s just a fine line we have to walk to make sure we’re doing things correctly and safely.”

For senior running back Marcus Crawford, the lack of direction has been hard to deal with, but, the love of the game is what continues pushing Crawford and his teammates along this offseason.

“As the year goes on it’s difficult to keep guys focused and locked in for the season in February at times,” Crawford admitted via text Friday. “Knowing that not only would we not be able to play as many games as we are used to, but, we are also not even sure if we would even be allowed to play when February comes.

“I believe leading by example is helping our guys and remembering why we play the game and what our goals are. Whether it’s to move up the rankings in the depth chart, striving to be a starter, working to stay the best in the state or practicing to reach the next level of football.”

For the folks that say football was impossible to have in the area this season, Crawford explained how watching 36 other states play has been quite a slap in the face not only for him, but for players and coaches around Massachusetts as well.

“It’s been frustrating that other states are able to play in the fall season and not us because I feel like that gives us a big disadvantage,” said Crawford. “Not only to Springfield Central football, but, to Massachusetts football as a whole. The best way to get better is to play the best competition. Not being able to have a postseason is taking that away from us. It also interferes with the recruiting process because people from other states will have film and stats to show college coaches from their season while we are still preparing for ours.”

No postseason would be another disappointment for the people who don’t agree with the participation trophy crowd. The other fall sports have all become glorified recess with so many restrictions, and a lack of a playoff format in football would be another terrible look for the Commonwealth.

“I think it’s very important to have a chance to defend our title,” said Crawford. “Having a postseason would not only benefit our team but it will benefit every team in the state. COVID is stealing a once-in-a-lifetime experience for guys, it’s not every day you get to play at Gillette Stadium.”

If there isn’t an opportunity to make another championship run, Brower knows it’s his job to make sure guys are still showing up and committing a full effort to the program each day, something he doesn’t think will be a problem.

“That Super Bowl title feels like it was 10 years ago,” Brower said with a laugh. “It’s been such a long year for everyone, I don’t think we’ve considered ourselves defending champions. These guys are going to be happy to play football in any capacity as long as we have a season. We don’t usually talk about past success anyways, but, this year especially I don’t think we’re defending anything. It’s all new.”

“If we don’t have a postseason our coaches do a great job keeping us motivated as well,” Crawford added. “The ability to play football at the next level, and being able to go to school for free – if not a lower amount of money due to athletic scholarships – is huge. Everybody wants to be able to support their future family and football is opening doors to allow our guys to do that.”

If the Golden Eagles eventually take the field this year, there is quite a bit of talent coming back.

Crawford and sophomore quarterback William “Pop” Wilson will be two guys in particular on offense that Brower is expecting big things from. Junior offensive lineman Travis Gause, senior offensive lineman Jacob Delgado and junior wideout Joseph Griffin Jr. will all be key looked upon to be key contributors on that side of the ball as well.

Whatever the season looks like, Brower just wants to make sure it’s done the right way.

“Whatever our schedule is, I’ll definitely reach out to our opponent’s coaches and make sure they’re committed to playing and playing the right way,” he said. “Our guys are going to work and compete. So, if other programs aren’t fully invested we want to know ahead of time. We owe it to the kids to give them the most realistic season possible, but, you don’t want to go face a team that doesn’t have its heart completely in it, because then you start risking injuries and stuff like that.

“No matter what, we’re going to coach our players and work together as a staff like we always do. We just want to make sure we have the closest thing to a real season possible for these kids because they deserve it.”