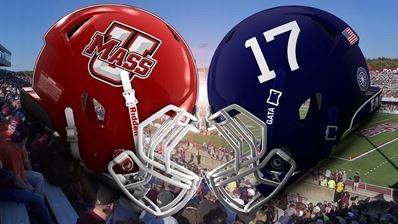 The history of the two programs goes back aways. UMass beat Georgia Southern 55-43 in 1998 for the FCS (I-AA) National Championship.

Here are three offensive and defensive keys for the Minutemen.

1. Get Fallon Comfortable Early: The Minutemen are going with Redshirt Senior Mike Fallon as their starting quarterback. Fallon knows the offense and is comfortable with the system. Bell has to get him into a rhythm early so look for 3 step and perimeter screens in an effort to get going.

2. Establish The Ground Game: The Minutemen need to replace last season’s leading rusher Bilal Ally. It won’t be easy but transfer Ellis Merriweather (6-2 227) and Cam Roberson give UMass two backs that can give handle multiple carries while offering a different style.

3. Handle their pressure: Georgia Southern is athletic defensively. They have speed in all three levels. The Minutemen offensive line is experienced and is the strength of this team. They need to do a good job in pass pro and give Fallon time.

2. Limit the Big Plays: Georgia Southern makes a lot of their big plays on the ground with quarterback Shai Werts and running back J.D King. The front must find away to limit the big plays. The secondary cannot fall asleep at the wheel and give up big plays through the air.

3. Generate turnovers: UMass did not do this enough last season and it made what was a bad defense even worse. They must find a way to generate a couple of turnovers today and give the offense extra possessions.

Final Prediction: Georgia Southern 42 UMass 21: The Minutemen are better and as a result, they will be more competitive. However. Don’t hold your breath regarding an upset. It is their first game of the season. Georgia Southern has played three. Add to that that the Eagles are better and you can see why they are the pick in this game.