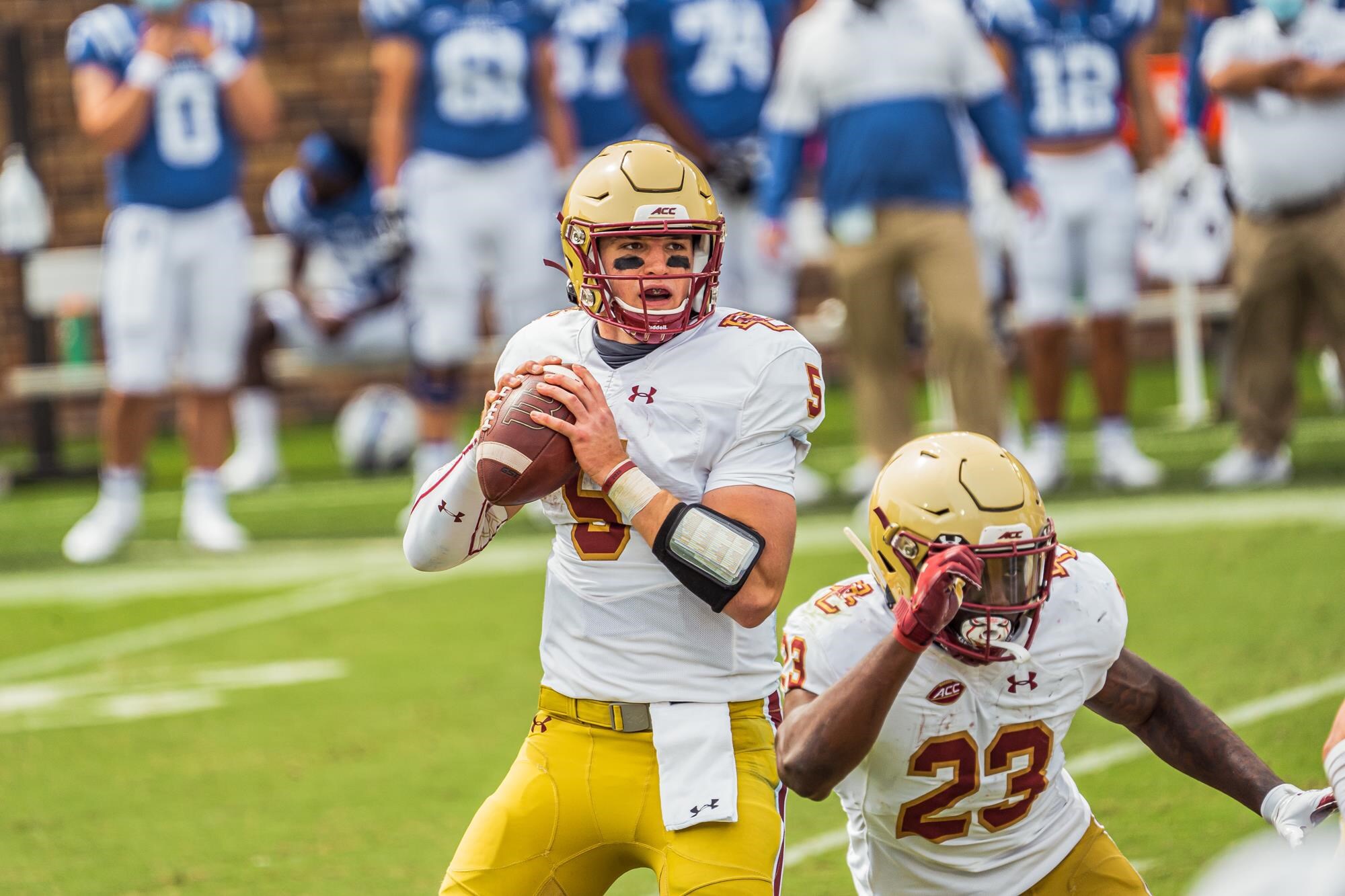 Saturday night’s result against Virginia Tech aside, it’s pretty safe to say that Phil Jurkovec appears to be the next great quarterback in a long line of them over at The Heights.

The game against the Hokies wasn’t pretty, but, entering the weekend “Thrill” Jurkovec has shown that he’s capable of some pretty eye-popping performances. What’s been most impressive has been how good the offense has looked with such little time to truly prepare this season. Of course there’s been hiccups – the five turnovers on Saturday in Blacksburg being the prime example – but, in the grand scheme of things the talent has been fairly consistent. Not only that, Jurkovec hadn’t really played many meaningful snaps since high school.

Phil became the first Eagles’ quarterback to ever throw for 300-plus yards in three of his first four starts last week. Jurkovec also had the most passing yards through four games in program history by a QB (1,181) heading into the V-Tech game.

I reached out to a few former Eagle quarterbacks to see what they thought of the new “next big thing” on campus. Two of them thankfully were able to chat for this story.

“We’re a long way from where we were a few months ago where we didn’t even know if he was going to be able to play,” said former Eagles QB, former NFL QB and current ESPN analyst Matt Hasselbeck during an interview Friday.

“A few months ago he wasn’t even eligible, and a few months before that he wasn’t even a student at BC. I think one of the main reasons he chose to go to BC was he wanted to work with (offensive coordinator) Frank Cignetti Jr, an NFL guy and I think Phil has NFL skills.”

A fantastic example of that NFL flash came against the Hokies on Saturday. The touchdown pass to Hunter Long was a thing of beauty if you enjoy instinctive playmaking. Jurkovec rolled to the right, stopped on a dime to halt a rushing defender and bought himself a couple more seconds before slinging it.

“Everything’s just been accelerated really fast,” Hasselbeck added. “You go back to when (coach Hafley) was hired and quickly after Phil’s enrolled to start second semester at Boston College with no real assurances he was going to A. be named the starter and B. even be eligible. You go into the spring and I think they had five practices. How much can you really know from five practices? There’s a lot of quarterbacks in that room and he had to beat out (last year’s) starter Dennis Grosel. It’s been impressive.”

Current St. John’s Prep coach and former Eagle and NFL quarterback Brian St. Pierre has been able to follow the new QB pretty closely and has also been impressed with how quickly the elite skillset has been on display.

“I saw him against Duke, I saw the Texas State game and I saw bits and pieces of the North Carolina game,” said St. Pierre. “The things that jumped out to me are, obviously he has great size for the position. He has a great stature in the pocket, that stands out. Very much a pro style, very much like a lot of the quarterbacks we’ve had over the years. He looks like he’s got a pretty good command over what they want to do offensively.

“You can see the guys rally round him. He’s got some toughness, he makes plays when people are hanging on him and those are all good things to see. It’s exciting as a BC fan to see a quarterback doing that and kind of bringing back the tradition (offensively) of what was done.”

Hasselbeck is in a position to see and hear what the early national perspective on both the quarterback and the program has been, and it’s been quite positive.

“For me personally, over the last 20 years I’ve been more of an NFL guy,” he said. “So, once Jeff Hafley was hired and I was able to continue to coach him  at Ohio State it was really exciting. For many of us, once he stayed there to finish out a run to try and win a national championship, a lot of BC fans seemed to tune in with interest to Ohio State.

“I started asking people I know around the NFl. People that know coach Hafley, and the compliments were just really impressive. From Richard Sherman, to John Lynch – even hearing what guys like Darrelle Revis or Aaron Donald had to say about Jeff Hafley when they were at Pitt – it was really exciting.”

For St. Pierre, the way the team has responded to Hafley has leapt off the television screen.

“The guys play hard for him,” St. Pierre said. “That jumps right out. People kind of roll their eyes and say they’re supposed to play hard. There’s a difference. They play with enthusiasm and there’s a new energy with the program as there should be, but, he’s gone about it the right way.

“Without knowing him and without having been at a practice, it seems like he’s a player friendly coach. Not that he lets them do whatever they want, but, he’s on their side. He’s in it with them instead of ‘hey it’s us coaches and you players,’ they’re in it together. I think that’s what the good ones do and that just seems to emanate every time I watch them.”

The attention on the program usually always correlates to having a quarterback who can sling it and the names I listed at the beginning of this piece all fall into that category. Both St. Pierre and Hasselbeck know just how important it is and they both believe Phil “the thrill” Jurkovec could bring the program back to where it belongs.

“Boston College is a pro style offense, we always have been,” added St. Pierre. “If you’re a pro style offense it starts at one position and it starts behind center. When BC is good it’s no surprise there’s usually a really good quarterback, generally a guy that goes on and plays in the NFL You start there and you build around him, but you usually build on balance.

“The one thing (Jurkovec) has that every great quarterback needs is a great receiver. That guy (Zay Flowers)…BC doesn’t always have guy that can take the top off of coverage like that. That makes this team and that quarterback even more dangerous. This program should be a Top 25 program consistently and I think they’re doing the right things and have that guy under center to get them there.”