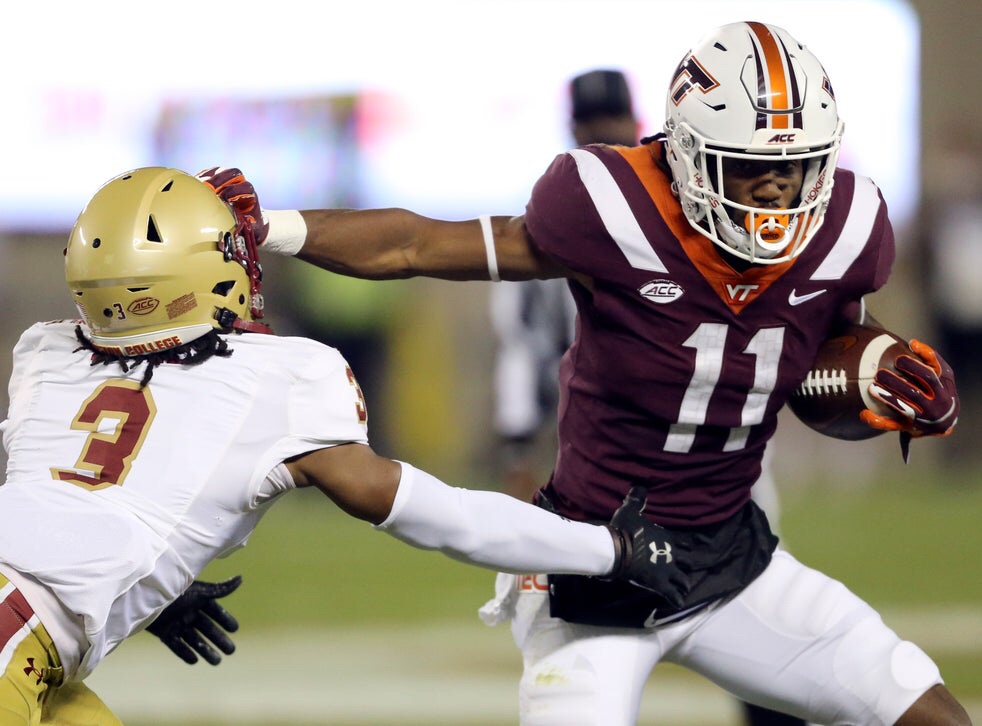 Through its first four games this season, Boston College took advantage of opportunities given to them by their opponents.

For weeks now, head coach Jeff Hafley has talked about needing to eliminate self inflicted mistakes despite being able to win three of his first four games as a head coach. Whether it was Texas State letting the Eagles back in the game late, or whether it was Pitt missing an extra point to give BC an overtime win. The Eagles have been good, but, they’ve also been a bit lucky.

That luck and inability to finish from an opponent was non-existent on Saturday night as No. 23 Virginia Tech made five turnovers hurt en route to a 40-14 thrashing.

“We have to hold on to the ball and that’s exactly what I told them (after the game). We’re going to learn from this.”

The nightmare started on the first drive of the game and only got worse as the night went on. BC came out looking to establish the run and did, moving down to the VT 41 before Pat Garwo was stripped. The Eagle defense responded, forcing a missed field goal. Unfortunately, just three plays later a miscommunication in the backfield led to another fumble at the VT 44 that the Hokies jumped on.

Seven plays later Kahlil Herbert – who tortured BC last year with Kansas – took a 29-yard screen pass to the house to make it 17-7, the same lead Virginia Tech also carried into the locker room at halftime.

“If you look at that first quarter, we were running the ball better than we had all year,” said Hafley. “We looked unstoppable on offense. It’s just self inflicted. We have to hold on to the ball.”

It was an ideal start to the second half for the Eagles as the defense forced a three-and-out and the offense responded with a 12-play, 80-yard drive. The drive ended with Hunter Long catching a ball at the VT 20 and running over three defenders before lunging for the end zone and just getting the ball over the goal line to cut it to 17-14.

The Hokies’ quick-strike offense wasted little time responding again. Herbert (18 carries, 143 yards) opened the drive with a 58-yard run and soon thereafter Hooker punched in a 2-yard TD run to go back up 24-14. On the very first play of the next BC drive – a drive that started at their own 10-yard line thanks to an unsportsmanlike conduct penalty that was enforced on the kick off – Travis Levy was stripped and VT took over inside the 20.

The Hokies settled for a 28-yard field goal that ultimately made it 27-14 after three quarters.

Virginia Tech started to pull away with 13:44 left in the game when Raheem Blackshear broke off a 28-yard touchdown run and a failed 2-point conversion made it 33-14. Boston College turned the ball over on downs its next drive, forced a punt and then Jurkovec was picked off on a tipped ball with under eight minutes to go.

“The last pick is what it is, but, the fumble by me and then the other pick are inexcusable,” Jurkovec said. “Those plays were there, just terrible plays by me.”

The Hokies capped the scoring with a 17-yard TD run by Hooker in the final 2-plus minutes. The final run from Hooker also capped a 350-yard rushing day as a team for Virginia Tech.

“Our main objective going into this game was to stop the run,” said linebacker Max Richardson. “They ran it pretty good on our ass. A lot of those plays turned into explosives which cost us the game.”

As odd as it might sound, coach Hafley said he was even more confident in the fact that his team can play with anyone after this loss. After giving up 73 points to Clemson on Saturday, BC’s next opponent Georgia Tech might be just what the offense needs to “get right” before heading to Death Valley on Halloween night.

“I can’t wait to get back to practice so we can get it right,” said Hafley. “I’m even more confident now – you guys can all think I’m crazy – but, it just shows me the type of group we have. I can’t wait to play again.”