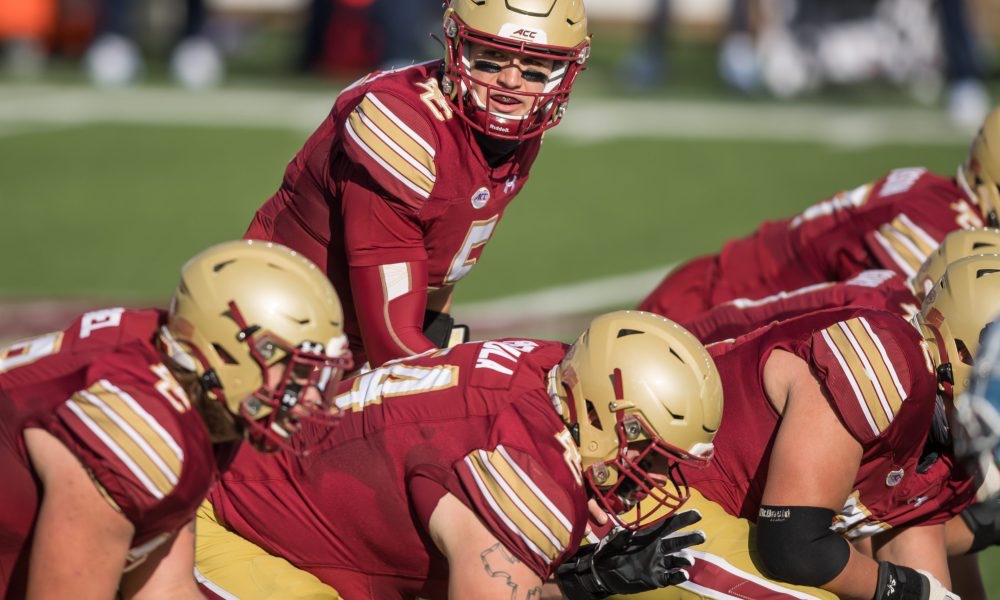 It’s crazy to think about but, the Eagles have just two home games remaining after this weekend.

Let’s jump right in, here’s everything you need to know about the BC football program heading into the Georgia Tech game on Saturday:

Five self inflicted mistakes by the Eagles at Lane Stadium last Saturday night took BC from potential upset at one point in the third quarter to a blowout loss on the scoreboard. To say coach Hafley wasn’t happy on Sunday afternoon during his brief media availability would be an understatement.

“I’m never going to be one to walk in after a loss and be pouty and start saying stuff to guys that I wouldn’t say otherwise, but, am I pissed off? Yeah, I’m pissed off,” said Hafley. “I’m sure you guys are too. If you look at that game, it’s 17-14 with four minutes left in the fourth quarter and we turned the ball over four times. Think about that. That’s what gets you angry.

“If you look at the system, our offense looked unstoppable in the first half. We fumbled the ball on the 15 on some freak collision. That’s our fault and we have to be better than that. Then we have a big run that puts us inside the 25 and we fumbled. Late in that third it’s still 17-14, that’s what you’ve got to fix.”

BACK TO BASICS AND TRUSTING THE PROCESS THIS WEEK

Following the loss, coach Hafley said in his postgame press conference that he couldn’t wait to get back to practice to “get it right”. Well, with the turnovers and a lot of missed tackles on Saturday night, the staff made sure they got back to basics on Tuesday and Wednesday, running ball security drills and “tackling circuits” around the field.

“There’s no doubt,” Hafley said Tuesday when asked if a practice after a loss is sort of like a reboot for everybody. “I couldn’t wait to get back on the field this morning just to start moving forward and get our guys back on the field and trying to do our best to get them better. Obviously, we got back so late Sunday, like four in the morning. We met with them a little bit on Sunday, and Monday is our day off.

“It helps us all. The cool part about this team is, you wouldn’t have known if we had won by 50, or lost the way we did. They come out and they work. That just shows me they’re buying into what we’re trying to build. If you just get so overwhelmed with a result, and you change who you are, and you let circumstances change you, then you’re going to have a team that comes out pouty and doesn’t practice hard. But the process is right. I know we didn’t play well enough, but, I’m very confident in the process and we’re going to get better.”

Defensive end Marcus Valdez echoed many of the same sentiments.

MAX RICHARDSON AND ISAIAH McDUFFIE LEADING THE COUNTRY IN TACKLES

You read that right. Take a look at the tackle leaders in the country. Richardson enters this week at No. 1 (53) while McDuffie is second (51). What makes both guys the players and more importantly the leaders they are?

“Max has been a key to my first year as a head coach,” said Hafley. “Just looking back early on when we were all sent home and I still didn’t know the team that well, the guy I leaned on was Max. You could just tell all the guys rallied around him, they all have a ton of respect for him as do I. Whatever that kid chooses to do in life he’s going to succeed.

“In terms of schematically, you hope those two guys do have the most tackles. Everything is kind of funneled into those two guys. If you look at a guy like McDuffie, he’s fast, he’s violent and he’s all over the football field. He’s going to continue to get better. He’s like the Waterboy out there, he hits everything that moves. Sometimes I think if I’m in the wrong spot he’s going to hit me.”

HIGH PRAISE FOR JURKOVEC FROM THE QUARTERBACK ALUMNI FRATERNITY

If you missed the piece last week on our site (GO READ IT), I spoke with both Brian St. Pierre and Matt Hasselbeck to see what they thought of how quickly Jurkovec has ascended to the top of the ACC quarterback list.

I followed that up on Wednesday by asking coach Hafley if he had received any thoughts or opinions from other alumni on his new superstar QB or if he worries about Phil possibly reading the press clippings a bit too much.

“I have heard from some guys, which I really, really appreciate,” he said. “Doug Flutie has texted me just about after every game win or lose. To me, when Doug Flutie shows up on my phone I’m still like a kid again and I think it’s the coolest thing in the whole world. I know he’s fired up about Phil. I texted Matt Ryan again this morning, he’s fired up, which is so awesome.

“To see these ex-quarterbacks that have played here and watching and they’re excited about him. As far as his development goes I don’t think he’s a kid that’s going to be reading what people are saying. He’s a humble kid and if you remember he was a guy no one thought could see the field a couple months ago. I think he remembers that and plays with a very big chip on his shoulder.”

Jurkovec also acknowledged how special it is to have former BC QB’s behind him in his corner.

“Matt Ryan, Matt Hasselbeck, they’ve reached out and it means the world to me,” Jurkovec said. “They played here and did great things here, so, we’re going to lean on them as much as we can.”

WHAT TO EXPECT FROM GEORGIA TECH

The Yellow Jackets gave up 73 points to Clemson last weekend, so, this should be an easy bounce back win for the Eagles, right? Not necessarily. Boston College is favored by 3.5 (as of Friday), but Hafley cautioned that this Georgia Tech team is still dangerous.

“Coach Collins has done a nice job at Georgia Tech,” said Hafley. “They have two really impressive wins against Louisville and Florida State. They’ve been in some really tight games. He brings a lot of energy, you can tell they play really hard. He’s very detailed, you can see how they act on the sidelines, he brings a lot of juice and in his second year there.

He’s done a really nice job. You can see the recruiting that he’s done with some of the young freshmen that are stepping up and doing a really good job.”