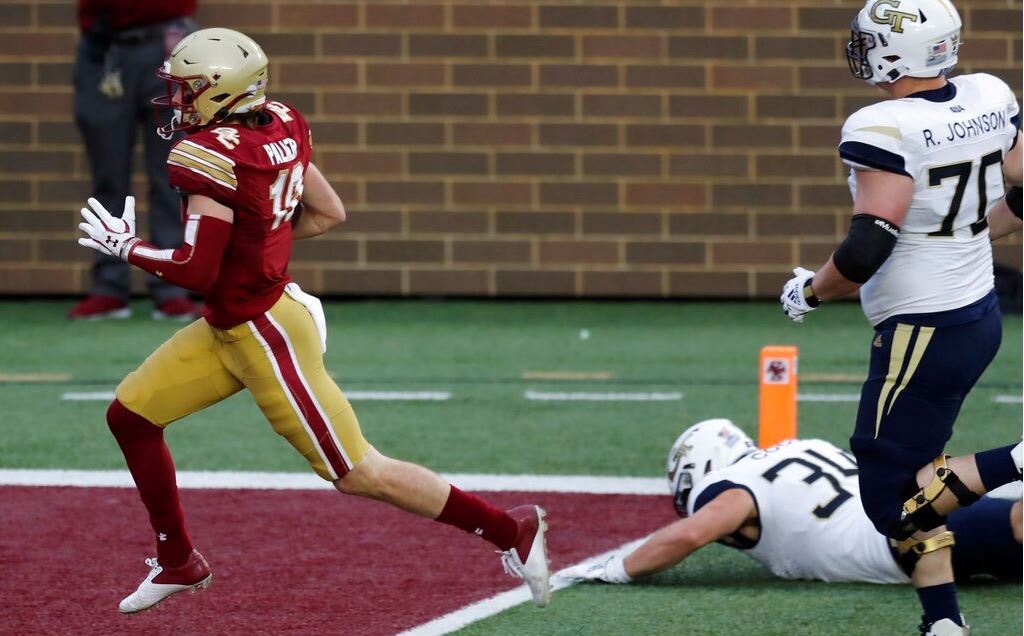 After five turnovers in a loss to Virginia Tech last Saturday night, the Eagles returned home and put in a week of practice centered around basic fundamentals, holding on to the ball and tackling.

The running game had also been awfully quiet. It arrived suddenly on Saturday, making quite a bit of noise to the tune of 264 yards rushing – something Hafley has said he knew was coming soon. An impressive effort on defense and zero turnovers offensively all added up to the Eagles having their closest thing to a complete game yet this season, earning a 48-27 win at Alumni Stadium.

Boston College moves to 4-2 (3-2 ACC) and gets some important momentum on its side before heading into Death Valley for a meeting with top-ranked Clemson on Halloween next Saturday.

“I thought it was coming last week, I saw it in practice,” Hafley said of the running game. “Like I kept telling everybody, I’d tell you the truth if I was worried about it but I wasn’t. I’m proud of the O-line not listening to the noise. I’m proud of Coach Applebaum, Coach Cignetti, David Bailey and Travis (Levy) and the way we ran the ball. If we can run the ball like that, that’s so hard to defend. We really did an excellent job. I expected it today, I expected it last week, and I expect it again next week.”

The first half – aside from some more bad penalties – was about as good as Hafley and the staff could have asked for with the Eagles carrying a 34-14 lead into the locker room at the break. Boston College racked up 257 yards on offense in the first 30 minutes and forced two turnovers.

Georgia Tech opened the game with the ball and eventually tried a fake punt that failed on fourth down, giving Phil Jurkovec and the BC offense the ball at its own 29. Two plays into the drive it appeared David Bailey fumbled but the call was overturned.

Moments later, Jurkovec hit CJ Lewis for a 7-yard TD catch to cap a 10-play drive and Aaron Boumerhi added the extra point for the 7-0 lead with just over five minutes left in the quarter.

Two plays after that Marcus Valdez recovered a fumble on a bad snap and the Eagle offense was in business at the Yellow Jackets’ 22. It didn’t take long for Jurkovec to find Lewis again, this time from 5-yards out for the 14-0 lead after one quarter.

This was the first two-touchdown game of Lewis’ career. The red shirt junior has stepped his game up quite a bit this season with Kobay White being out.

“It feels great,” Lewis said. “I’ve just stayed patient, waited my turn and capitalized. Phil and I have a great relationship and I’m just happy that we won the game today. Kobay has been a great supporter. I can’t thank him enough for this year and I can’t wait to have him back.”

BC got a 41-yard field goal from Boumerhi with 13:04 to go in the half to push the lead to 17-0, and it was about to grow. The Eagles got a bit lucky as the ensuing kick off was returned for a 97-yard TD but a hold brought it back. Just two plays into the next possession, Georgia Tech fumbled again and Mike Palmer picked it up, taking it to the house for a 34-yard touchdown return and a 24-0 lead.

“I was just kind of running to the pile and it happened to just kind of come right out to my feet,” Palmer explained. “In practice we talk about greedy scoops, scooping everything up because you never know. So, I just stopped it up and started running.”

Unfortunately, three different Eagles were called for unsportsmanlike penalties during the celebration, and it was enforced on the kick off. The Yellow Jackets got another good return and started at their own 47. Josh DeBerry was called for targeting on the first play of the drive and ejected from the game, giving GT even better field position.

Penalties once again reared their ugly head for the Eagles on Saturday night as BC committed 10 for a total of 102 yards. It’s been a point of emphasis all season yet continues to be an issue, so, how do you fix it?

“We’ll keep coaching them, showing them why, and teaching them. That’s our job is to teach,” Hafley said.

The Jackets capitalized on the celebration calls when Ahmareen Brown hauled in a 32-yard TD pass from Jeff Sims to cut it to 24-7. Boston College quickly responded with a 22-yard touchdown run from Zay Flowers on a jet sweep a few plays later to push the lead back up to 31-7 with 9:44 left in the half.

Penalties again hurt BC as the Eagles got a stop on third down on the next drive but offsides gave Georgia Tech new life. After a long 37-yard completion on the repeated down, Sims found PeJe’ Harris for a 31-yard TD reception to make it 31-14 with 7:13 to go.

Jurkovec (13-21, 145 yards, 2 TD. 7 carries, 94 yards) ended the half leading a 16-play play drive that took up nearly seven minutes and ended with another Boumerhi field goal for the 20-point halftime lead.

Bailey (13 carries, 85 yards, 2 TD’s) has been praised often by Hafley and his teammates over the course of the last few weeks for being patient after not getting too many touches on offense early this season. His patience was rewarded on Saturday with his phenomenal performance.

Bailey’s first TD of the game came four plays into the third quarter in the form of a 34-yard bulldozing run to make it 41-14. A roughing the passer on 4th and 21 on Georgia Tech’s next drive extended it and eventually Sims punched in a 1-yard keeper to make it 41-21.

Jahmin Muse picked off a pass deep in Yellow Jackets territory late in the third quarter and three plays later Bailey had his second touchdown from 4-yards out for a 48-21 lead.

Georgia Tech capped the scoring with 10:09 left in the game on a 2-yard end around from Brown, and a missed extra point gave us the 48-27 final.

“I’m really proud, I gave him a game ball,” Hafley said of Bailey. “I said to the team, the game ball wasn’t just for his 85 yards and two touchdowns tonight, it’s for how he’s handled himself and how he’s been a great teammate. How he hasn’t flinched, or how he hasn’t pointed fingers, or coming up to me and asking ‘Coach, why am I not getting the football?’ Just epitomizes what this team is all about, and how they believe in each other.”

Now, all eyes will turn towards Clemson. The No.1 ranked Tigers have won 38 straight regular season games after getting a bit of a scare from Syracuse on Saturday before pulling away. Everyone will be breaking down, dissecting and over analyzing the matchup all week, but, even minutes after a strong victory, Clemson was on the minds of everyone wearing maroon and gold too.

“Getting the win is awesome, coaches say you have to celebrate each win because wins are tough,” Jurkovec added. “This next game…Clemson is the big dog. I think everybody knows it, there’s no secret about it from all the success that they’ve had.

“It’s just really exciting for us that we get to go there and have a shot at them.”