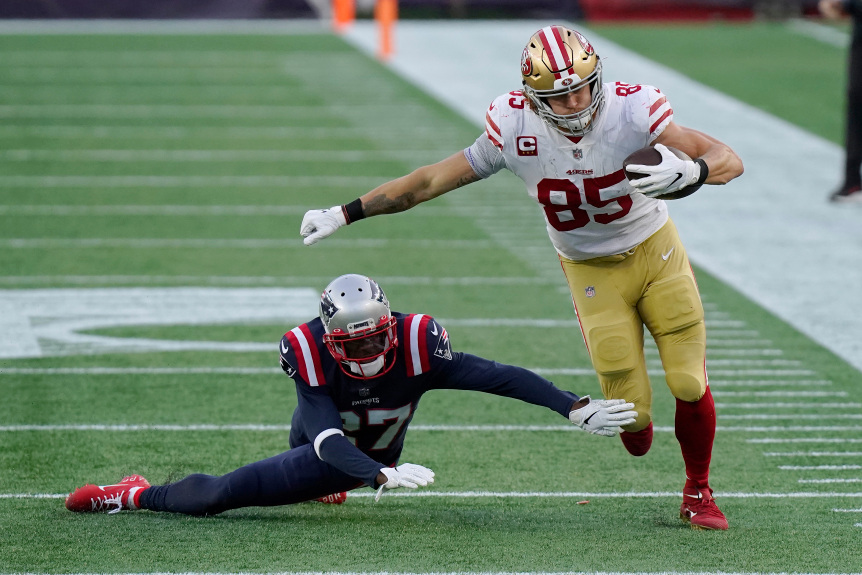 FOXBOROUGH — For some reason last week, the New England Patriots decided to put out an “all dynasty” team.

Of course, whenever these teams of the decade or century come out, it signifies the end of an era. So, did the Patriots call their shot when they decided to release the all dynasty team?

It sure as hell felt that way on Sunday. The Patriots no-showed in an embarrassing 33-6 loss to the Jimmy Garoppolo-led San Francisco 49ers. The 27-point loss was the worst in the Bill Belichick era and New England is now two games under .500 (2-4). It appears that the golden age is truly over for the Patriots.

“We were clearly outcoached, outplayed, out everything,” said Belichick in his postgame press conference. “Need to just keep working here and find a way to do everything better.”

The nightmare before Halloween started with the very first drive – a nine-play, 75-yard march that took up 5:04 and ended with a Jeff Wilson 3-yard TD run. Wilson had a hell of a day, racking up 112 yards on 17 carries with three touchdowns before getting hurt late.

The Patriots got an interception from Devin McCourty on the next 49ers drive following a New England punt, but, a Chase Winovich 15-yard penalty on the play ruined any good field position they may have had. A Nick Folk 40-yard field goal were the only points the Patriots mustered on the drive, cutting it to 7-3.

After another putrid three-and-out for Newton and the inept offense, the 49ers marched 84 yards in seven plays and Wilson added a 16-yard TD run with 59 seconds to go, making it a 23-7 game after a missed PAT. Both QB’s traded interceptions to end the half.

“Very disappointing but, we’ve just got to be better,” said Newton. “One thing that can’t happen is I can’t feel sorry for myself. I know what the issue is, just have to attack it and do better.”

The bleep-show continued early in the second half as the Pats settled for another field goal (41 yards) after an eight-play drive to open up the third quarter. San Francisco quickly made it 30-6 with a 7-yard TD run from Wilson. Seven plays later Newton was picked off again, ending his day as Belichick soon decided to go with Jarret Stidham.

The 49ers added another field goal after a 10-play, 6:20 drive for the 27-point lead with just nine seconds left in the third.

Stidham didn’t fare much better as he was picked off with 9:23 remaining in the game. After a 49ers punt the debacle fittingly ended with Stidham getting sacked for a loss of seven on the final play.

“I can’t speak for everybody, I just stick to the man in the mirror,” Newton added. “I wasn’t good enough. In no way shape or form did I put this team in a position to compete. This is the National Football League where a lot is put on the quarterback in order to deliver and I haven’t done that.”

On the other side, Garoppolo’s first game back at Gillette Stadium since the trade was about as perfect as it could have possibly been.

“We came out and played the way we know how to play football,” he told Mike Giardi following the win. “We got on a roll early on and good things happened. The defense played outstanding tonight. When we (run the ball) it sets up everything else. The O-line set the tone and punched people in the mouth.

“It wasn’t a normal week. This one was a fun one out there. Coming back to where it all started, coming back in and hearing the same music and everything. It was a cool moment.”

While the old “next guy behind Brady” was having a blast, the Patriots are now in a state of disarray for the first time in 20 years, and there doesn’t seem to be any easy fixes on the horizon anytime soon.