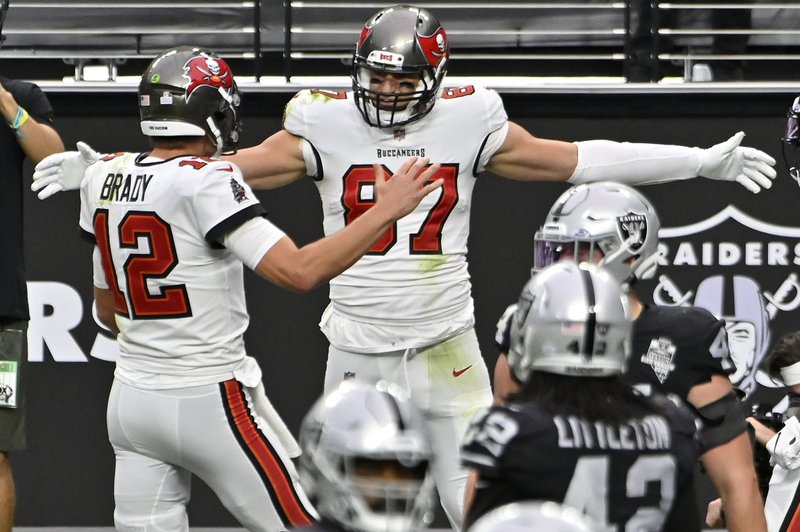 If you were smart enough to flip over to Red Zone or find the Buccaneers-Raiders game during the abysmal Patriots game on Sunday, then you saw Tom Brady looking as good as ever with a vintage performance.

The Bucs moved to 5-2 with a dominant 45-20 win and it appears like things are truly starting to click this time. Penalties have been down, the offense has looked like the one Brady and McDaniels ran for years, Gronk looks like Gronk again and the Tampa defense has been consistent. The early roller coaster ride throughout the first few weeks looks like it’s over, and Brady always turns things up a notch when November rolls around.

Oh yeah, they added some guy named Antonio Brown to an already loaded wide receivers group on Friday night too. We’ll get into that later.

“”It really is. It just takes time,” head coach Bruce Arians said when asked if the first three weeks were basically a preseason for Brady. Sound familiar Pats fans?

“I think the lack of continuity also hurt him a bunch,” Arians added. “Hopefully, we can have some continuity going forward and he can continue to work with timing and all those things. I think Byron [Leftwich] has done a great job of having him ready to play, him seeing the coverages and where we want to place the ball. [Byron] obviously listens to him on things he likes, also, and incorporates them in the offense.”

Once again, the Bucs actually fell behind in this one, but it was only 7-0 when Brady punched in a 1-yard run to cap a 10-play, 77-yard drive. The GOAT finished the day 33/45 with 369 yards and 4 touchdowns. He also added another on the ground as well.

Las Vegas went back up 10-7 and the Bucs responded with 14 unanswered to take a 21-10 lead into halftime. First, Brady hit Gronk (5 catches, 62 yards, 1 TD) in the back left corner of the end zone from 5-yards out with an absolute dime to make it 14-10. Another methodical 13-play, 88-yard drive near the end of the half resulted in another dime, this one going to Scotty Miller (6 catches, 109 yards) from 33-yards out.

“We’re all expected to go out there and work hard every day and do our best to help the team win,” said Brady. “Tat’s what we’re trying to do. We’re here to win football games and we’re here to do a job. We’re 5-2, we’re at a decent place. There’s still a lot of football left. We’re going to need everybody and we’re going to need everybody’s best.”

A Raiders punt and Bucs field goal opened the half to make it 24-10. The Raiders made things interesting by cutting it to 24-17 and then 24-20 on a 1-yard TD catch for Darren Waller and a 36-yard field goal, but, it was all Brady from there.

Chris Godwin hauled in a 4-yard TD pass from Brady with 7:22 left in the fourth for a 31-20 lead. One play later the Bucs picked off Derek Carr and the Bucs made it hurt with a 1-yard run from Ronald Jones to make it 38-20. One final 1-yard touchdown pass from Brady to Tyler Johnson late capped off the five-TD day for TB12.

“I think it’s a good understanding of hitting spacing. Our guys know our spacings and Tom [Brady] has done a great job of delivering the ball down there,” Arians said of the Bucs’ red zone offense. “When there’s an all-out pressure, he gets it out. When they’re dropping eight, he creates. I think it’s been a good collaboration. Then, running the football down [there] has helped. I can’t remember the last time – I think we’re 20-of-20 in goal to go – I don’t think I’ve ever had that [in] my 27 years in this league. It’s really good execution and the offensive line is doing a hell of a job, too.”

So, after putting up 45 points, the Bucs clearly need help from Antonio Brown on offense, right?

It’s a pretty stunning move, and the majority of people have a right to think he’ll sabotage what Tampa Bay has going right now. Time will tell, but, Brady appears to be the general manager these days as well.

“It’s up to us to get to work,” Brady said when asked how Brown will fit with all the other offensive weapons. “We had a decent day (Sunday) on the road, but, none of it matters next week. We’ve got to learn each other. That happens on the practice field and that’s where you earn trust. We’ve got to get better and we’ve got to stay after it.”

Obviously Brady pulled the strings on this one, since Arians adamantly said in the offseason he wouldn’t bring Brown in due to his past experiences with him. Yet here we are, so, what does Bruce have to say about such a risky move?

“It’ll be pretty much ground zero with him other than the route tree, how we run routes and things like that,” he said. “It’ll be a big adjustment for him, but we’ll get him up to speed.”

The next time we do Tampa Bay Tuesday the Bucs could have imploded again. For now, if you’d like to join us on the Bucs and Brady bandwagon while side-eye following the Patriots for the remainder of 2020, we’ve got plenty of room.