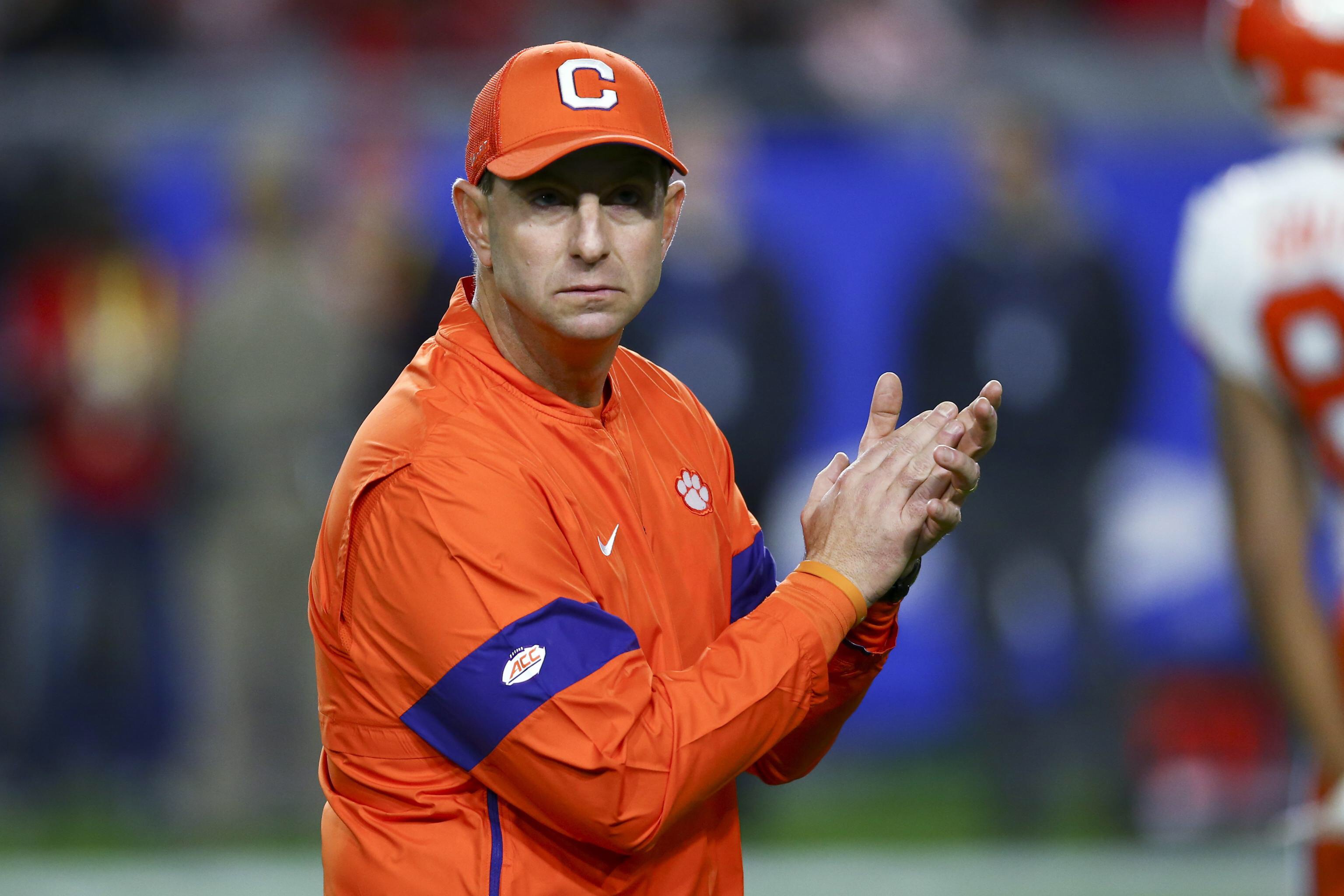 It’s Clemson week ladies and gentlemen. That means that this isn’t any ordinary week.

A matchup with the top-ranked team in the country warrants a little more pomp and circumstance and some above average coverage. So, with that in mind, we decided to take a listen to Clemson head coach Dabo Swinney’s press conference on Tuesday to get his initial thoughts on the Eagles.

“BC is going to be a tough team, Swinney said on Tuesday. “This is a really well coached team. Jeff (Hafley’s) done an awesome job coming in. He’s put a good staff together, he’s immediately created belief in his guys. These guys are playing hard, they’re playing confident and they could easily be 5-1 right now.

“They’re a 4-2 football team. You take over a program and what’s there is there, but, he’s got a couple of transfer guys in there…they’re doing a great job of figuring out what their strengths are and playing to those strengths. They’ve gotten better and better as the season’s gone on and this is going to be a tough, tough challenge for the Tigers this week, no doubt about it.”

Swinney quickly pointed out that he believes  the offensive line is the Eagles’ biggest strength.

“All those lineman are back. Big, physical, strong,” said Swinney. “BC lineman, that’s what you think about. That’s a really good group up front. They’re well coached and they’re all on the same page, those guys have played a lot of ball together.”

While he praised the O-line, Swinney quickly pointed out this is not your typical BC offense.

“The biggest difference in preparing for BC compared to years past is they’re throwing the ball all over the place,” he said. “They’re doing it, but they’re not just necessarily dropping back and throwing the ball. There’s lots of play actions, lots of boots, post wheels, screens, just a lot of different ways to get their playmakers the ball.”

Swinney eventually got into talking about Phil Jurkovec and as you’d expect he was quite complimentary.

“They’ve got that big quarterback, he’s hard to get on the ground, said Dabo. “He’s athletic, he’s crafty, he extends, he creates and he can make the throws. He’s a kid that transferred in there from Notre Dame and he’s just a really good football player that’s getting better and better.

“You can tell that the team believes in him, so it’s going to be a challenge for us defensively in sorting things out, especially post snap.”

It was on to the running game and skill players next, and Swinney was well aware that things got rolling on the ground last week against Georgia Tech.

“They’ve got really good personnel up front and really, they have three backs,” he said. “All three of those backs can run. The Flowers kid is a really good player. The tight end (Hunter Long) is leading them in receiving. He’s a big, strong target that makes a ton of competitive plays. We’ve got our work cut out for us there.”

Of course, the defense wasn’t going to be ignored by Dabo either.

“Defensively, it’s the same thing, these guys are very well coached,” Swinney said. “You can see Jeff’s influence immediately from what we saw against Ohio State. He’s a detailed coach, he’s a fundamental coach and they challenge you. These guys are going to be where they’re supposed to be. They’ve got a couple transfers up front and it really helped them.”

Perhaps the best compliment any coach can receive is when he or she is told that their players are mentally tough, which is exactly what Swinney said about this Boston College defense.

For Clemson, it’s national championship or bust, as it should be. The Tigers are 32-point favorites at this point, and Swinney knows this is a time of year where a slip up could cost them the entire season, so the Eagles won’t be catching them off guard.

“This is a time of year where you get some guys banged up, you have to dig in a little bit and you’ve got some guys that half to step up,” he said. “I’m very impressed with this (BC) team. I know we’re going to have a big challenge this week, but we’re looking forward to it.”