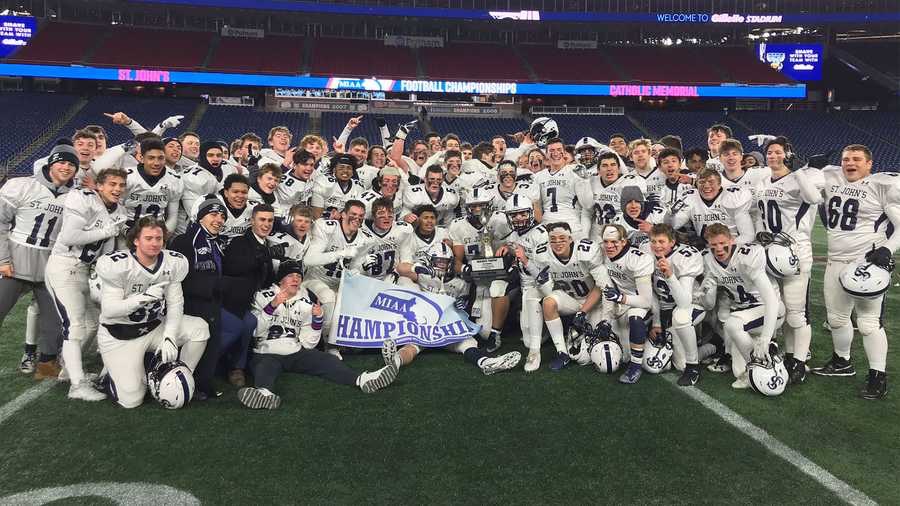 We turn our attention to Danvers this week and the two-time defending Division 1 Super Bowl champion St. John’s Prep Eagles.

Head coach Brian St. Pierre is (hopefully) entering his seventh season at the helm of the program, and even though he’s disappointed that SJP isn’t getting ready for a playoff game this week, like most of us the pandemic has changed St. Pierre’s perspective on things quite a bit.

“I’ve taken two things from this,” he said Friday. “One is how thankful I am for the staff I get to work with. Coaches have done a tremendous job. We met before all the (workouts) started and passed around ideas about what it might look like with limited opportunities and stuff like that. I’m grateful for their time and commitment and really everyone that’s helped us during this process has been great.

“The second thing is the players. They’ve been awesome and exceeded everything I could have expected in terms of attendance every day and giving us that hour of some work before they do strength and conditioning after. They’ve had a great attitude about it. I look at them what they’ve had to deal with and think about how I would have handled this at that age and it probably wouldn’t have gone very well. I’m grateful for them as well.”

SJP’s workouts have been staggered in a very structured manner to make sure that players and coaches have remained safe while trying to get ready for a season that isn’t a sure thing. With the hybrid type of model in place, players have been going to workouts four days a week depending on who is in school on a given day. St. Pierre said it’s roughly 40-60% of the team that’s usually at a workout that’s included skills, drills and technique work along with strength and conditioning.

“This has definitely not been an ordinary year, so preparation for the season has been a lot different,” said senior and Princeton commit Collin Taylor. “We’ve been doing what we can as a team, whether it’s working hard in the weight room or getting practice in on the fields. As leaders and seniors, it’s been important for myself and the other upperclassmen to keep bringing the energy to the team. Encouraging the underclassmen and welcoming the new freshman and sophomores into our program has been a huge focus. We’re all itching to get the season going, but for now we’re just enjoying the opportunities we get to be with each other.”

“It’s definitely been a strange year – not what any of us were expecting,” added classmate and Tufts commit Peter Wiehe. “In the beginning and throughout the pandemic, with so many unknowns, it’s been hard to tell if we’re going to get some time to be together as a team. Something we tried to emphasize among our teammates is self progress and self work. Take this time to work on yourself. Don’t just sit around and do nothing. Make sure you’re doing everything you can to use this time as an advantage, not a disadvantage. Whether that be with lifts or position specific drills in your garage, or backyard, we tried to get everyone to set the bar high for themselves, just like we do as a team when we’re together.”

With winter tournaments officially being canceled this week, there is still quite a bit of pessimism out there that a football season will eventually happen in February. St. Pierre emphasized how important it is that programs state wide take the field no matter what it looks like.

“They better let us play. They owe it to these kids to do everything in their power to get a season off. I’m operating and our staff and kids are operating under the assumption we’re going to play and that’s what we’re going to preach to the kids. There has to be some reward for your patience and the way you dealt with the adversity. There has to be some reward there.”

St. Pierre’s strong stance on this is just one of the many reasons why his players have loved playing for the former Boston College and NFL quarterback over the past six seasons.

“Coach St. Pierre has had a tremendous impact on every player that has had the privilege to play for him,” said Taylor. “It starts with his love for football and for the team. Playing for someone who cares as much as coach does is truly special. Memories that stand out to me of coach would have to be his pregame speeches. There’s no one better at hyping a team before a big game than Coach St. Pierre. After every one of them I feel like I could run through a wall.”

“He holds you to that high standard and then makes you want to achieve it,” added Wiehe. “On game day, coach Saint’s pep talks in the locker room are legendary, the way he inspires us by letting us know the confidence he has in us and that translates to our own self confidence in our ability. Nothing needs to be yelled. We know what the expectation is and what we have to do. We know our jobs.”

Both Taylor and Wiehe are just a few of the guys St. Pierre will be relying on for another successful campaign this season whether there’s a chance at a three-peat or not.

“You’d like to keep that train rolling, as hard as it might be to do, we’d love that opportunity but it is what it is,” said St. Pierre. Along with Taylor (led SJP in sacks sophomore & junior year) and Wiehe, Nick Barrett will be one of the few seniors that St. Pierre can rely on with this year’s roster being a bit younger than normal.

Junior Joenel Aguero is the Eagles “very best player” according to St. Pierre, and it makes sense with offers from Michigan, Ohio State, USC, BC and many others. “He’s the real deal, he’s as good as we’ve had in a long time,” St. Pierre added. Classmates Jackson Delaney and James Guy Jr. (1200 rushing yards as a sophomore) will also be key players as well.

For both Taylor and Wiehe, playing high school football at a high level has opened quite a few doors, and the only right way to close out their time as Eagles would be on the field.

“I feel especially lucky to have had the support of a great program like St. John’s,” said Taylor. “With the help of coach St. Pierre and the rest of the staff I’ve had a great high school football experience so far. I’ve been fortunate enough to play on the past two state championship teams. I definitely think that the success of the team has helped with recruiting. Being a part of a winning program not only brings attention to everyone involved, I believe it’ll also help guys perform at the next level.”

“I went to St. Johns Prep because I wanted to play at the highest level, and the school has delivered that for me in every way possible way,” added Wiehe. “I got to play on one of the biggest stages in the northeast and play the very best teams and be among the very best. That’s opened up doors and created some pretty amazing opportunities for us.”