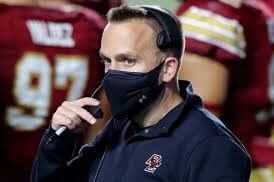 Usually, we would wait and include some stuff from coach Hafley’s Sunday media availability later in the week.

However, with the way the game went down and the impact of taking Clemson all the way to the final buzzer, we thought it would be worthwhile to give ourselves and the BC fan base some closure. Not to mention the fact that BC is not practicing on Election Day Tuesday, which is one of the days we usually speak with coach and some players.

With all that being said, here’s what stood out from Sunday’s 13-minutes with coach Hafley:

The Eagles offense had one of its most important drives of the year late in the first half on Sunday. BC not only grabbed a 28-10 lead on its final possession of the second quarter – which included John Tessitore’s brilliant offsides call (yell?) – but they milked almost eight minutes of clock after the defense had been on the field for quite some time. I asked coach if that drive in particular is one he’ll be able to point to weeks from now when the team is in a critical spot and say “this is what we need.”

“The way we played complimentary football in my mind worked out about as well as it could. 17 play drive, 75-yards, 11 runs, four third down conversions and we took 7:42 off the clock. You couldn’t draw it up any better, you couldn’t coach it any better and our players couldn’t have executed better. If we didn’t get (the 4th down fake FG) I was probably going to go for it anyways. That drive to me was as good as you can put together playing and coaching and I was really proud of that.”

Clemson QB Trevor Lawrence was diagnosed with Covid on Thursday, and ironically enough the Eagles announced another round (now over 6,000) of negative tests on Saturday morning. Coach was asked if there are any different types of protocols or scenarios BC has to go through once coming back from a different state and playing a team who has recently had a positive test.

“I literally just got tested again” Hafley said moments into his availability. “We got tested like we do every Sunday, and we’ll get tested again, and again. We weren’t around too many people down there. We stay together at the hotel, we were smart and wore our masks around each other. Obviously at the age yeah you’re in close contact, but, everything I read and everything I hear there hasn’t been many cases transmitted from player-to-player on the field.

“We keep an eye on it regardless, we’ve got a great protocol. I talked to the staff (Saturday) night on Halloween just to make sure they checked in on their guys to make sure they’re being smart and responsible and doing everything we can do to stay healthy because there’s a lot of football left to play. It’s amazing what we’ve done so far, it’s unbelievable.”

HAFLEY ON HANGING WITH THE TOP-RANKED TEAM IN THE COUNTRY

For weeks, we’ve heard Hafley preach trusting the process. The process may not have resulted in a win on Saturday, but for a program to do what the Eagles did while still being on the ground floor of their development was impressive as hell, and Hafley knows it.

“There’s so much good stuff on this tape,” he said. “These guys came out and played so well. Our offense executed at such a high level in that first half Defensively we stopped the running game. Travis Etienne might be the best back in college football and had 84 yards rushing. They had 31 rushes for 106 yards, our defense played so well against the run. Their (QB) made some good throws and they’ve got a lot of good players, man.

“There’s 10 minutes left in the game and we’re losing and they don’t score another point. We stopped them, gave the ball back to our offense, had a drive where we crossed the 50 and we were going in to score to go up. We didn’t get it (on 4th down) when we went for it, but we stopped them again. We stopped them in a 4-minute offense with Travis Etienne and that O-line. No one had stopped them on 3rd-&-1 all year and we had the ball twice in the fourth quarter to go down and beat the No. 1 team in the country.

“The cool part about our team is, our guys believed they could win the game. I promise you, Saturday morning when no one thought we could win, when everybody on TV said we”d lose by 28-30-something points, our guys and our coaches believed we’d win. We don’t talk about it, we don’t say it publicly, but that’s what it’s about right there.”