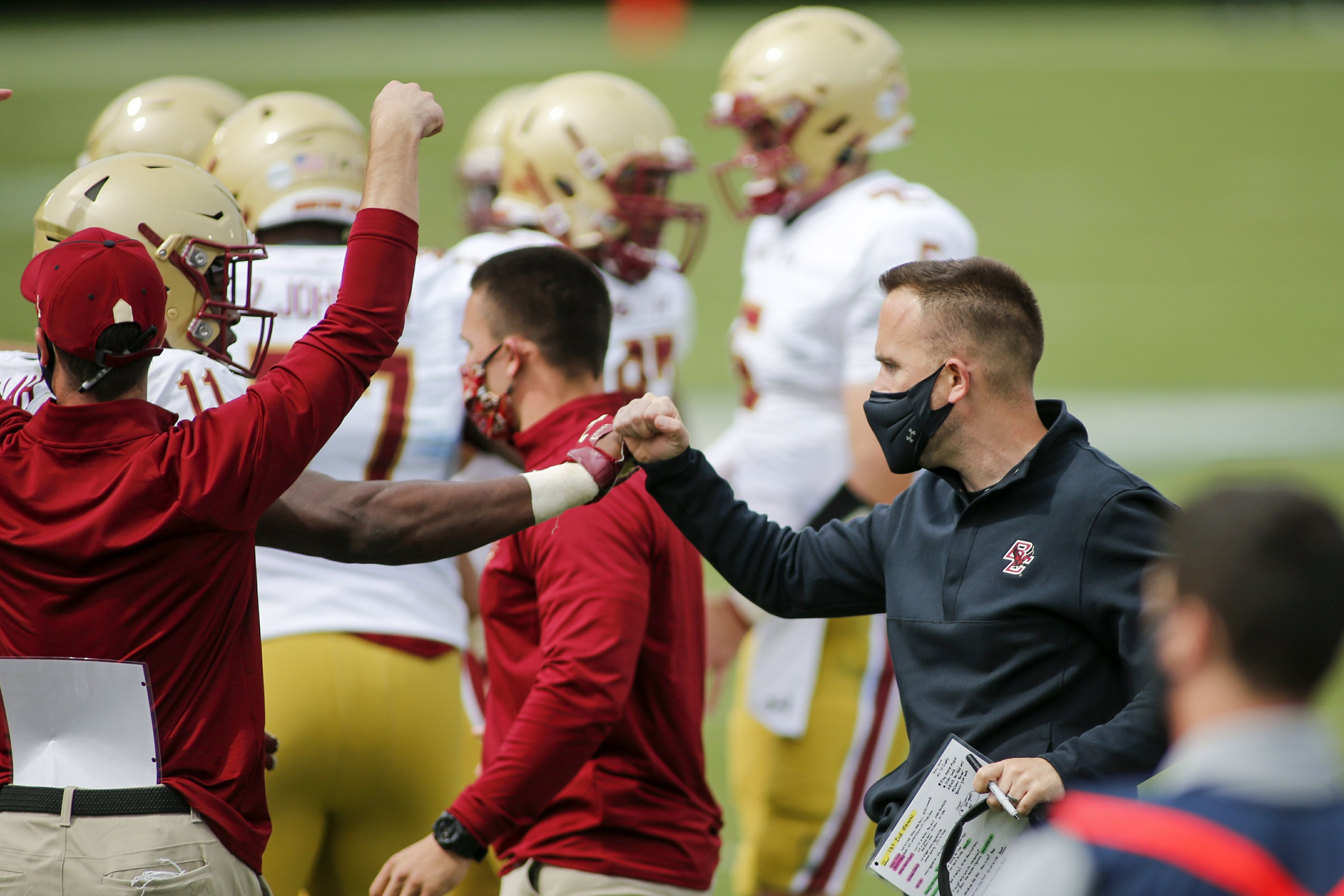 Seven games down, four to go.

Is it just me, or does it seem like this season is now flying by? Anyways, after finally getting over the emotional let down of the near Clemson upset, Eagles fans can turn their attention to a very beatable Syracuse team when BC heads out on the road for the second straight week.

The Carrier Dome has been a rowdy place in the past, but with the precipitous drop off by the Orange in recent years combined with no fans being allowed still, the Eagles should feel right at home on Saturday as 14-point favorites.

It’s a perfect opportunity for BC to get their offense hitting on all cylinders – much like the Georgia Tech game following the loss to Virginia Tech – as Notre Dame looms on the horizon next Saturday at The Heights. Coach Hafley and players talked about this week’s matchup among many other things, including the election in what was a busy week in Chestnut Hill.

Here’s what you need to know about the 4-3 Eagles before Saturday’s 2 PM kickoff:

Normally, Hafley and select players join the media on Tuesdays and Wednesdays of game week. This Tuesday was just a bit different though, so players had the day off to go vote or do whatever they felt they needed to do on such an important day for the country.

“We talked about the importance of voting,” Hafley said. “I mentioned the day we didn’t practice (earlier in the season). Voting is such a big step. Josh Beekman – obviously a former player who works with us – took over the initiative to educate the guys a little bit and help them register. We (had) transportation set up (Tuesday) if anybody wants to go and vote. More importantly though, we had a Zoom call for anyone that wanted it on our team to educate them about the candidates, and talk to them about the process of voting. There is so much more to it than just saying, “hey, go vote.” How do you register? How do I get set up? Where do I go? Who are you going to vote for and why? Show them the different views, and I credit Josh for starting that initiative.”

“It’s a very important day for everyone,” Brandon Barlow added on Monday. “I got my vote in, I had to get my absentee ballot from New York. Coach Hafley has said multiple times already take advantage of this opportunity to go vote and have an impact on change you want to see.”

CLEMSON LOSS A WIN FOR RECRUITING

As we’ve talked about many times this year, the entire recruiting scene has been flipped upside down. Coaches can’t have athletes on campuses, and in some states can’t even go watch local games (*cough Massachusetts cough*) making it that much harder to evaluate talent. So, even though the Eagles missed out on the upset, over 4 million people watched the game.

There’s a strong chance that a potential Division 1 player watched that game last weekend and said “I want to go to Boston College” because of it, and that can’t be understated or undervalued.

Barlow – who committed months after BC’s huge win over USC in September of 2014 – was asked if that game had anything to do with his decision to come to BC.

“Absolutely it did, I was actually at that game,” he said. “Just to see the atmosphere and the way the team came out. It was a tough game and it came down to the wire but, as a recruit at that time it made an impact on me as to what type of team BC is, what type of atmosphere you’re going to be playing in here and what type of team they had.

“As a recruit watching us move forward now, that’s definitely a factor that plays into it. How hard we play is enticing players to come and want to be a part of something special here.”

HAFLEY HEADS TO A DARK PLACE

If you’ve heard coach Hafley’s interviews with ‘OMF’ on WEEI, you’ve heard him and former Patriots tight end Christian Fauria reference “going to a dark place” in pre-game. Now, anyone that’s played sports knows he simply meant focusing as game time approaches, but I asked coach what exactly going to a “dark place” meant to him on Wedneday.

“A dark place is just kind of me getting in a zone where I just feel locked in and confident. I know I’ve done everything I could to prepare myself for the game,” he explained. “Game day you go to that place and there’s such a level of focus and such a level of you’re not going to flinch, there’s no nerves anymore you’re just fired up and you’re coaching and you’re playing ball. That’s all it really is. It’s doing everything I can to make sure the team is prepared, and it doesn’t end, right?

Phil Jurkovec and Cowboys rookie quarterback Ben DiNucci know each other quite well from their days in Pennsylvania.

Last Sunday, DiNucci got his first career start with the Dallas quarterback room in absolute shambles. DiNucci went 21-of-40 for 180 yards but didn’t throw a TD in a 23-9 loss to the Eagles in Philadelphia. He fumbled twice, but, Jurkovec knows his buddy was in a tough spot.

“It’s just crazy to see him play,” Jurkovec said. “To get his first NFL start after being a seventh round draft pick, you know, like unsure if he’s even going to get picked up. I thought he played decently but it was a tough situation for him because it’s his first start, the team’s struggling and it’s just hard as a rookie. I think he got better from it and he’ll be better for it.”

WHAT TO EXPECT FROM SYRACUSE

The easy answer here is “not much,” but of course no one wearing maroon and gold said that this week. Hafley cautioned that this Syracuse team could pose some problems for the Eagles if they aren’t locked in, especially defensively.

“It can be challenging, especially if you’re a pretty complicated defense that relies on making a lot of checks and adjustments,” Hafley said of Syracuse’s up-tempo offense.

“We pride ourselves on getting lined up and playing with fundamentals and technique. We have a bunch of calls where we can do that pretty quickly. It’s something that I thought about last year when I came back to college football. On the call sheet, you have your first and second down calls, your red zone calls, and then you have your tempo calls.

“There are calls that you feel really good about on tempo, and you think they can work. There’s times they’ll go fast and there’s times that they won’t. coach Babers, everywhere he’s been he’s done a really good job. Him and coach Gilbert on offense, they have a really good system. They can get up and crank it out as fast as anyone in the country. We need to be prepared for that and we need to practice that. We need to make sure we sub guys and make sure we’re fresh for four quarters if they want to go as fast as they can.”

It’s a get right game this week before turning all eyes towards the Fighting Irish.