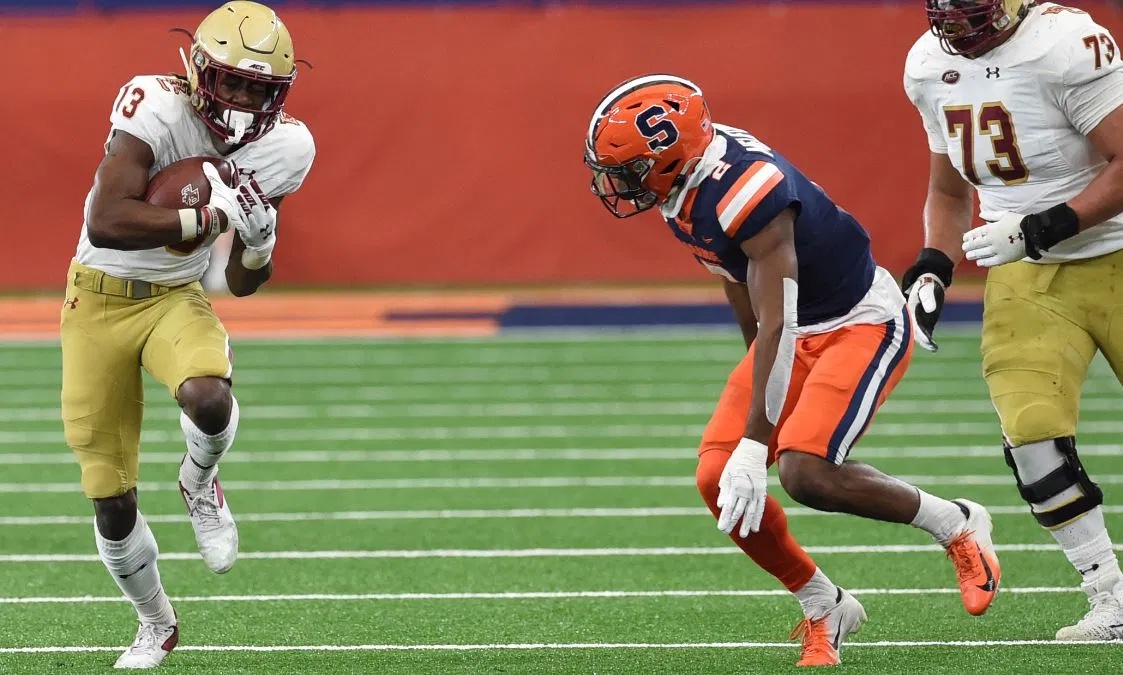 SYRACUSE — I’m 99% sure that I’ve used this to start another game story from this season, but the old saying “they don’t ask how, just how many” applies here as well.

BC visited the Carrier Dome in Syracuse on Saturday afternoon and were favored to win by at least 14 points. With the way the offense had been clicking lately, it was just assumed by anyone who covers or follows the team that they’d win in a blowout.

No one told the Orange that though. Syracuse hung around until the final whistle, but the Eagles escaped with an ugly 16-13 win.

Boston College (5-3, 4-3) now has a date with Holy War rival Notre Dame in Chestnut Hill next Saturday. It will also be the ‘red bandanna’ game and (hopefully) the Fighting Irish are coming in ranked No. 1 after upsetting Clemson in South Bend on Saturday night.

“Certainly not our cleanest game, and probably not our best when we go back and look at it,” head coach Jeff Hafley admitted postgame. “But, at the end of the day, we’re 5-3. We were a team that was picked to finish 15th in the ACC, we just won our fourth ACC game. I told the guys in the locker room that I don’t care what the score is, when we win I expect the music to be blaring and to be enjoying it with each other because we played hard, and that team fought hard. I told them it wasn’t going to be easy.

“There are things we have to clean up, and there are things that I have to clean up. I didn’t coach my best game today and I’ll be the first to admit it. I thought Syracuse fought really hard. Coach Babers and his staff had a good game plan. I just loved the way we finished the game. The O line did a good job. We’ll look at the tape closely and get better, and we’ll move on to the next game.”

To say the atmosphere inside the dome was weird would be an understatement. If you’ve ever had the pleasure of standing inside the Fish Field House during a BC practice with the music blaring, it’s exactly what Saturday’s game felt like. Now, obviously no fans had something to do with it, but playing inside an empty dome was quite jarring compared to playing in outdoor stadiums that have been empty or partially full.

BC looked a bit flat throughout the day – perhaps due to the awkwardness inside the dome – and after both teams traded punts on their opening possessions the Eagles went up 3-0 on a 33-yard field goal from Aaron Boumerhi. The game remained that way until Syracuse knotted thing up at 3-3 four minutes into the second quarter.

The Eagles had several drives stall on Saturday, including an 11-play march following the three-point response from the Orange. Boumerhi missed a long 52-yarder with 8:44 left in the half. The defense quickly forced a three-and-out and the Eagles’ only touchdown drive of the day began at their own 34.

“They were dropping back so far and so deep, so that we knew they were saying, “you’re not throwing the ball over our heads,” Hafley said regarding the lack of offense. “The way (Phil) checked the ball down and had a couple screen passes shows the signs that he’s getting better. We had a couple where we almost hit, the one before the half where he rolled out and had CJ on the sideline. I mean he was 20-29, pretty efficient with 209 yards and one touchdown with one 40-yard pass. Not your typical 350 from him, but it was a pretty efficient day.”

BC opened the second half with the ball, again marched downfield in 11 plays but failed to turn it into points with another missed filed goal. Syracuse made it a 10-6 game late in the third with another field goal, but a Boumerhi 36-yarder four seconds in to the fourth quarter pushed the lead back to 13-6.

Three plays into a critical drive for the Orange with 10 minutes left in the game Jason Maitre picked off a pass from freshman QB JaCobian Morgan. The Eagles punted three plays later, but immediately got the ball back on the first play of the ensuing drive with strip and fumble recovery by Luc Bequette at the Cuse’ 18-yard line.

It turned into another missed opportunity after the Eagles had 1st-and-goal at the 2-yard line. A dumb dead ball foul on CJ Lewis and a hold quickly turned it into a 2nd-and-goal from the 27 and BC ended up settling for another field goal from Boumerhi to make it 16-6 with 2:05 left.

To their credit Syracuse refused to pack it in and tight end Aaron Hackett caught a 1-yard TD pass with 21 seconds left. The onside kick was a fail hough and after two runs and a kneel down the Eagles could turn their attention to the enormous matchup they face this weekend.

The most impressive aspect of BC’s win on Saturday was the running game. David Bailey had 125 yards on 25 carries while Levy added 73 yards on 17 carries. Hafley has continuously said the running game will turn the corner when it needs too, and it has a couple different times the last few weeks.

“We felt good with our scheme against their scheme,” said Hafley. “We had 47 carries for 191 yards, and it could have been more. I’ve felt good about our run game since the Virginia Tech game. The sign of a good team is to take steps forward, so once we saw that we had to keep getting better. I’m proud of the way those guys did today.”

Now, despite fans still not being allowed in at Alumni Stadium (anyone else see the thousands of fans storm the field after the ND win last night? thanks governor Baker), the red bandanna game and a meeting with a top-5 Fighting Irish team in Chestnut Hill is music to everyone’s ears.

The scenario is also eerily similar to the one the two teams faced in 1993. Will history repeat itself?