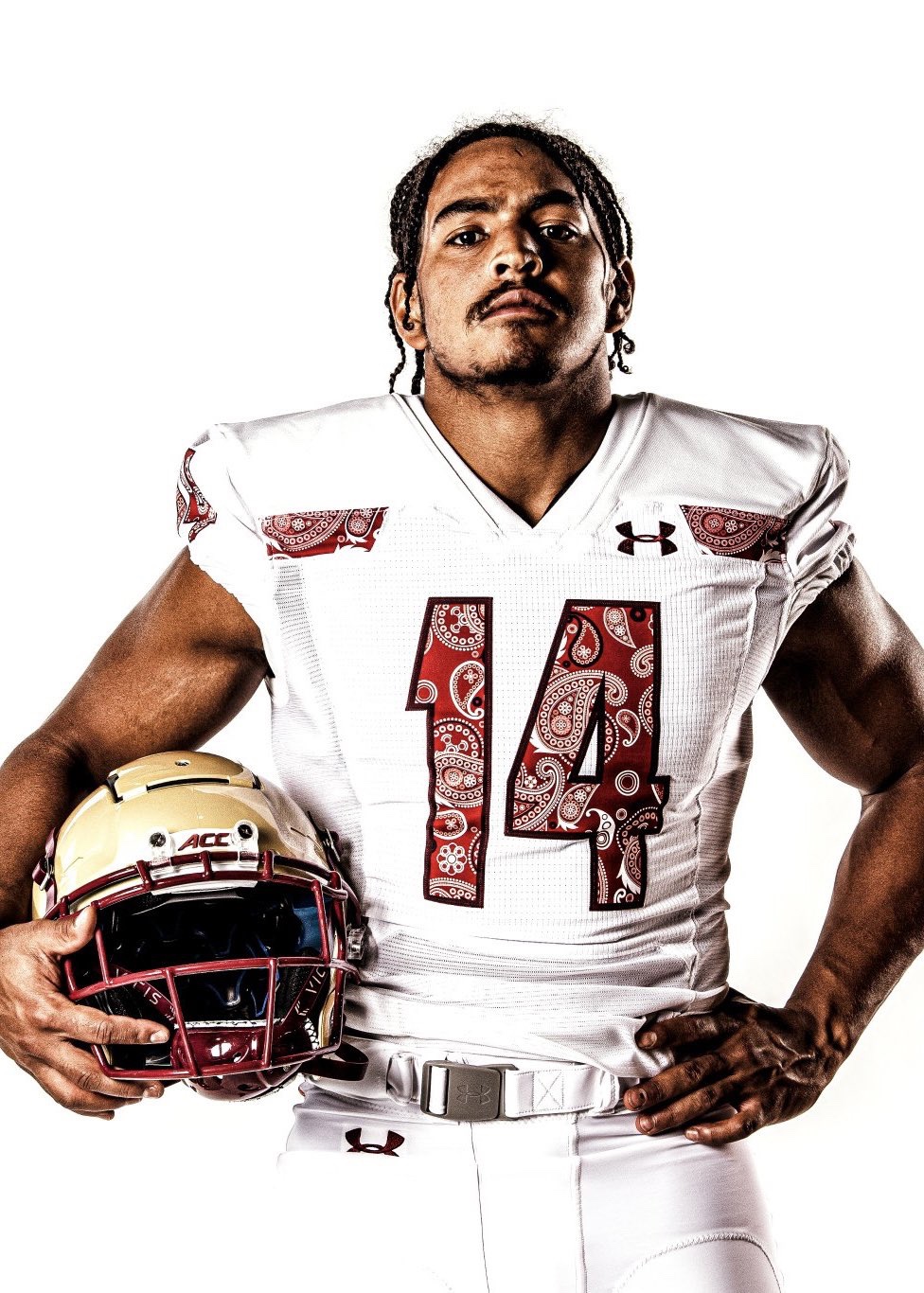 In the immortal words of Cosmo Kramer, “giddy up.”

Not only do the Eagles host Notre Dame for the latest installment of the ‘Holy War’ on Saturday, but it’s also the annual red bandanna game honoring former Eagle and true hero Welles Crowther.

Let’s jump right in to all of the storylines surrounding this huge matchup that will be nationally televised on ABC:

The red bandanna game has quickly become one of the most important traditions not only in Boston sports, but all of college football. Coach Hafley reflected on what it means to be a part of this game on Saturday. The Eagles will be wearing special uniforms, but it’s about far more than just the new swag.

“We talked about that back in training camp because I felt like it was the time to do it.
It’s an honor for me just to be part of something that’s so special, truthfully. I’m very grateful for that opportunity.”

A few players also weighed in on the experience, some that have been through it before and some that will be playing in the red bandanna game for the first time.

“Every year it just gains more meaning for me,” said DE Marcus Valdez. “When I was a freshman I didn’t really know what it was at all. At first it’s like ‘oh, cool gear,’ but then when you hear the story it really hits you how selfless someone can be and speaks to BC’s mantra of men and women for others. We would all love to say we’d do the same, but when the time came to help people he did and that’s a hero. The gear is the gear, but representing Welles is an honor. I feel like we always have an extra edge every red bandanna week.”

“It’s something I didn’t know about before getting to BC,” admitted Phil Jurkovec. “Just hearing the story of Welles and what he did on 9/11 is very powerful and a good example for everybody. Just the bravery he showed and being a BC student I think it’s really cool we can celebrate what he did in the game.”

During Pitt week, we talked quite a bit about how special the game would be for coach Hafley as a former Pitt coach and for Jurkovec as a Pennsylvania native. This week is a personal game for Jurkovec, but for much different reasons.

Notre Dame is of course Phil’s former team, and he was extremely open and honest this week about why he’s now an Eagle instead a member of the Fighting Irish.

“I feel like I’m in the right place for sure,” he said. “There were many reasons why it didn’t work out at Notre Dame and I just grew frustrated. Now, I’m just having fun with it and trying to keep getting better. Right from the start I’ve felt good about the situations, the guys, the coaches.”

How bad was it at Notre Dame? Well, Jurkovec said he almost switched positions just so he could try and get on the field.

“Notre Dame was my dream school growing up…for me, football was changing,” he admitted. “I was debating switching positions because I didn’t want to another year sitting on the bench. I was on the brink of not playing QB. My family just said “you have to go.”

Of course there is quite a bit of media attention on Jurkovec this week, and coach Hafley even joked with the local outlets that we shouldn’t ask him anything about Notre Dame this week. Still, the young QB is handling it well and looking forward to trying to go show why the Fighting Irish made a mistake letting him go.

“I’m excited to play them,” he added. “We try to treat every opponent the same…as opponents we can beat, but I do think this is a special game. I played there and I know all the guys. It’s going to be fun but you’ve got to treat it as another game. I’ve talked to a lot of those guys throughout the season. They want to beat me badly and the same goes for me. We’re not friends on the field, but I still good relationships with a lot of those guys.”

OPPORTUNITY OF A LIFETIME

Two weeks ago the Eagles nearly shocked the world and upset No.1 ranked Clemson. Two weeks later, the Eagles get another chance – again on national television with a third appearance on ABC this season – to play a top-three team in the country when No. 2 visits on Saturday.

This clearly doesn’t happen often, so the Eagles are loving the fact they have a chance to shock the world again.

“To a lot os us, this is a redemption shot for us,” said TE Hunter Long. “We came up short against Clemson, we had it. Now we’re getting the same chance, we’ve got to go try to finish it this time.”

“I was actually talking about that earlier. When do you ever get a chance in a span of three weeks to play the number one team in the country and then the number two team in the country?” said Hafley. I’ve certainly never done that while I was in college football. It is a great opportunity. I don’t know how often that will happen or if it will ever happen again. We’re excited.”

WHAT TO EXPECT FROM THE IRISH AND DOES BC REALLY HAVE A SHOT?

Let’s work backwards here. First of all, yes, they most certainly do. The Eagles are 12-point underdogs, but you’ve got to look at the spot. Notre Dame is coming off an extremely emotional 47-40 shootout win over Clemson. It’s going to be quite a test to ramp it back up to a certain level if the Fighting Irish are going to match the emotion BC will be coming out with both for Welles and just because it’s a rival on national television. If there was ever a spot for BC to pick them off, it’s here.

Now, Ian Book will be leading the potent offense and the BC defense will HAVE to get off the field on third down. As we’ve said each week BC can’t hurt themselves with penalties – which has been an issue – and the offense needs to capitalize in the red zone, something they struggled with early, fixed, and then struggled with again last week at Syracuse.

A few important numbers and stats from the BC-ND rivalry…

-Boston College and Notre Dame meet for the 26th time in Saturday in a. matchup of the only Catholic institutions in FBS,. The teams are playing for the Frank Leahy Memorial Bowl. The trophy is named for Frank Leahy, who coached Boston College from 1939-40 before taking the Notre Dame job in 1941. He coached the Irish through the 1953 season, aside from the time he spent serving in the Navy in 1944 and 1945. Leahy went 20-2 with the Eagles, before posting an 87-11-9 record with Notre Dame.

-The Fighting Irish lead the all-time series 16-9 and the Irish have won seven straight.

BC 51, NOTRE DAME 45, in overtime. This will be my first BC-Notre Dame game, the first time I’ve covered a team ranked in the top two and also my first red bandanna game.

As a very wise man named George Costanza once said, “alright, you want to get nuts? Let’s get nuts!”