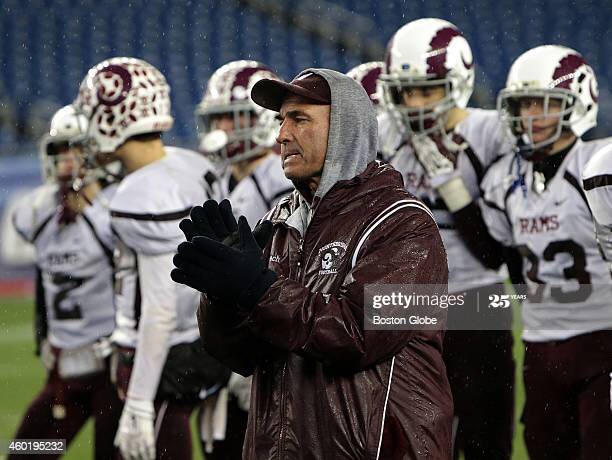 The Twitter handle “@Since_1896” isn’t the official handle of Northbridge football just because it was the only one available, it’s a way of life.

As you’d imagine, this year has been quite an adjustment for him.

“I’ve been on the sideline at Northbridge High School since 1970,” he said Friday morning. “That’s 50 years of fall, football, Thanksgiving, the whole bit. It occupies your time and your mind. So, needless to say this has been very strange, and I know it’s not just for me it’s been hard for everybody. It’s very hard for me to wrap my head around.”

While LaChapelle is still the same guy he’s always been, he admitted that dealing with this pandemic has changed the way he thinks about things now, especially football.

“I have to say, it’s taken the sting out of me a bit,” he said. “When I do sit back and realize that we have no fall, and “oh hey it’s Friday, I should be getting ready for a game,” it just hits you. It’s a surreal, strange way of living right now. I’m sure I’m no different than anyone else.”

The Northbridge program is a bit different than some others in the sense that they have been one of the schools most affected by Massachusetts “leadership” unable to have interaction with players with a season supposedly looming in 3 months.

Rams players are adapting on the fly to make sure they’re ready if a season does happen in February.

“This virus has caused numerous problems and one of them is certainly the lack of capability for interaction among the team because of the restrictions,” said one of the senior captains Brennan Mahoney. “Training must be altered to ensure the safety for everyone however it does add some extra difficulty. One positive in all of this is the extra time given to workout. For players who typically play a spring sport, there is usually only the summer to fully dedicate workouts to football however this year we have the added time. Making sure we use this added time to our advantage is the most important thing for the team right now. We must stay ready so we don’t have to get ready.”

“Training for a season in February is 100% a different animal,” added fellow captain Jared Wielsma. The weather is most likely going to be cold and snowy and the air is going to be cold and dry. Staying in the gym and working out has been a fairly easy thing, as the gym I go to is 24 hours and is indoors. However, I have encouraged the team to get outside and run when it starts to get colder to get your lungs used to the cold and dry weather.”

Both Mahoney and Wielsma, along with Johnathan Cray (captain) and Chip Wermuth will be the guys LaChapelle will most be relying on to help write another successful chapter in Northbridge football history.

“For me personally, I want to be known as the player who was a workhorse and went above and beyond every expectation,” said Wielsma. “I want to be the example that coaches set when they see a new group of players come in and they want to teach them about being humble and doing what’s asked of you.

“Some details that give me confidence in some of the younger guys is that I’ve seen a majority of their work ethics skyrocket as they get older, they get in the gym more consistently and see more steady gains, and they understand the key fundamentals of what makes a great player here at Northbridge.”

“I want my legacy to be a state champion as well as a great leader,” added Mahoney. “We went to the state semifinals last year and I know with this group of guys that we have this year we are more than capable of winning it all. The culture that Northbridge Football players have been brought up in by our coaches since 8th grade is that every season is expected to be a winning season and state championship is the goal year in and year out.

“This program will be thriving for years to come due to the large class below me and the younger guys below them. We had numerous sophomores starting last year and we expect more young guys to step up this year. In a program like Northbridge it doesn’t matter what grade you are in, if you can contribute to the team our coaching staff will put you in the right place to succeed.”

You don’t have good teams over 124 years just by accident. The Northbridge football tradition is something you’re born into, and LaChapelle credits youth programs as well as the selflessness of his players to the sustained success.

“We do have a very good reputation especially in CMASS, and I think it’s because we’ve always embraced two things,” he said. “In the 46 years I’ve been head coach we’ve only had three losing seasons. Through the football team we’ve always ran a flag football program for the last 30 years. A few of my coaches direct them, but my players are the coaches for these kids (3-8), and that to me is key. People may not realize it, but a lot of young kids look up to high school players as heroes and we’ve fostered that.

“We also – if you were to come watch us play – you would see many water boys running around, some I don’t even know. We got into a situation at the state championship in 2014 at Gillette Stadium. We would always have a ton of water boys, and I’ve got 20 grandkids, 10 of them are boys. We got into a hassle where they were going to tell us we had to pick two and we refused. Believe it or not, I was prepared to pull my team, we did it all year long and they were well aware of it. I’m not turning out college kids, occasionally we’ll have a few, we just seem to turn out a good Northbridge football player and it starts young.”

Whether the Rams get to take the field this season or not, the Northbridge program – perhaps more than any other program in the state – will continue to be engulfed by tradition that lasts generations.

“Playing for such a historic and long-standing program means a lot for me and for my teammates,” said Mahoney. “It gives us a sense of pride for our school, coaching staff and our team. Knowing that there is a legacy to uphold every season creates determination amongst the team to not only follow this amazing tradition of winning but also to carve out our own legacy within such a decorated program.”

“It definitely feels like there is a weight on your shoulders every season and there’s the expectation of having a winning season each year,” added Wielsma. “Thankfully, all of my years playing for Northbridge have been winning seasons, but those winning seasons all come with injury, hard work, determination and sacrifice.”