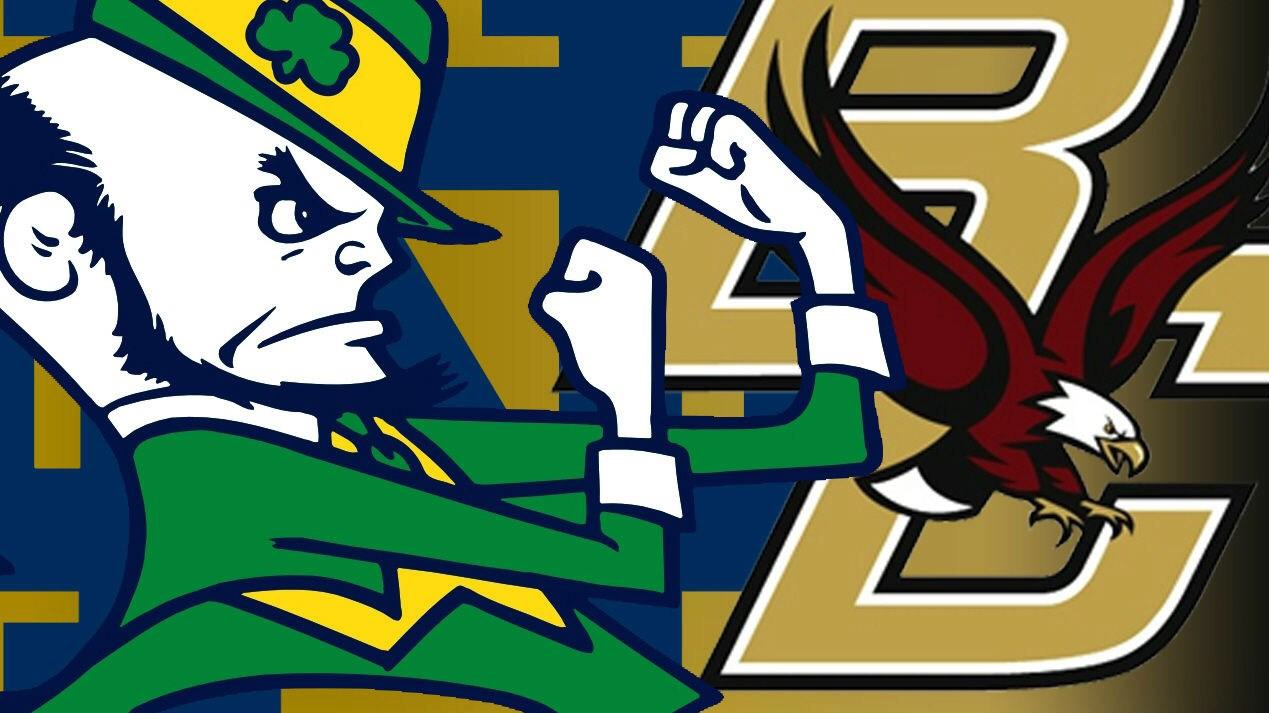 Opening Kickoff: It is another installment of the Holy War as Notre Dame travels to the Heights to take on the Eagles in a pivotal ACC match-up.

For the second time in three weeks, the Eagles have a chance to make a statement nationally. After almost beating Clemson on Halloween, the Eagles now have an opportunity to knock off the number two team in the country.

The Eagles and the Irish are meeting for the 26th time in series history. Today’s meeting is extra special as it is also the Red Bandanna game. The game former Boston College Lacrosse player and 9/11 hero Welles Crowther.

The two schools are the only Catholic institutions in FBS and they play for the Frank Leahy Memorial Bowl. Leahy coached both teams Boston College (1939-40) and Notre Dame (1941-1953).

The Eagles are 4-6 at home all-time against Notre Dame and are in search of their first home win against the Irish since 2008.

Of course there are plenty of ties between the two programs. Quarterback Phil Jurkovec is the biggest tie after transferring from Notre Dame to Boston College in January.

Here are three offensive and defensive keys to the game.

1. Offensive line must play well: The Eagles offensive line will face arguably their stiffest challenge of the season today against Notre Dame’s front seven. They must play well and give Phil Jurkovec time. Identifying the Irish pressure packages and picking them up will be important.

2. Bailey must be a big part of the plan: For the first time all season last week, the Eagles committed to David Bailey and the running game. They have to stick with the ground game today. Controlling the clock and setting a physical tone up front will be key for the Eagles today.

3. Jurkovec has to be great but smart: The Eagles need a big game out of Phil Jurkovec. However he needs to be smart in the process. Jurkovec cannot do everything.

If he does and starts forcing things, that’s when he could make a costly mistake. He needs to play within the game plan and take care of the ball. If he does those two things, he will make plenty of plays.

2. Generate turnovers: The Eagles cannot win this game if they don’t win the turnover battle. Getting consistent pressure on Ian Book and forcing him to make quick decisions could lead to mistakes on his part. The Eagles need to be in his face all afternoon.

3. The Book Factor: Ian Book played the best game of his career last week throwing for 310 yards and a touchdown while adding 64 yards rushing on 14 carries. He and running back Kyren Williams were the difference. The Eagles need to rattle Book and throw him off his spot. If he and Williams get into a groove, it will be a long day for the Eagles defense.

Final Prediction: Notre Dame 28 Boston College 24: I am going the shootout route with this one. I think it will be a close game. The Irish will pull it out in the end but they will be tested by a Boston College team that has proven this season that they have what it takes to play with the big boys.