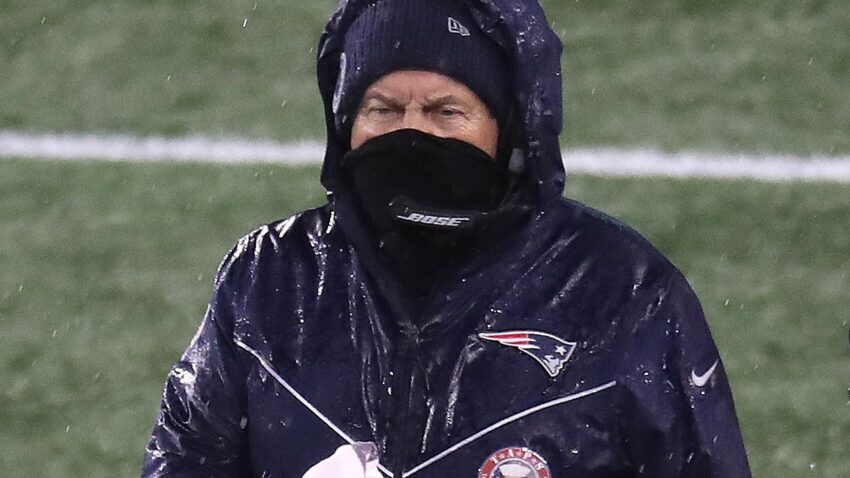 Here’s another week of what stood out to us from BB’s weekly interview with Ordway, Merloni and Fauria:

Ordway opened up the interview asking Belichick how important it was for the Patriots to be the more physical team last Sunday. It’s a very fair question given the fact that just a few weeks ago the Patriots were manhandled at home on the ground by the 49ers.

“I think our guys stepped up to that challenge and we tried to play them physically and aggressively and I thought our guys did a good job of that.”

Fans and media members everywhere had been having a field day with Bill Belichick’s poor drafting over the past few years (me included) so it was nice to see so many young guys contribute to the win on Sunday night. Fauria asked Bill how he felt seeing guys like Josh Uche and Chase Winovich step up in primetime.

For Bill, it wasn’t so much about the young guys as it is the entire program finally starting to improve daily after weeks of no practice and continuity.

“I was just happy for the team, the staff, we’ve worked very hard here over the past several weeks,” Belichick said. “I feel like we’ve gotten better day-by-day, little by little in practice. Less mistakes even in meetings and walk throughs. We’ve tried to play a little better in the games, improve the next week, and that’s really team wide.

“Making quicker adjustments on the coaching end, trying to maximize what we can do (gameplay wise), what our team can do from an experience standpoint. I was just happy to see all that come together for all of us.”

Fauria made sure there was an early awkward silence pause here when he followed up asking if Bill thought the team was finally caught up mentally after the strange few Covid weeks.

“…well, we keep working at it every day and we’ve been able to bring some consistency together interns of meetings, practices, games, reviews, meetings practices games, so I think we’ve made some improvements and hopefully we can make more as we move forward.”

Kyle Dugger (12 tackles against Baltimore) and Cam Newton – in particular how he’s improved putting the team in 3rd-and-short situations – followed as topics of conversation for a bit before Fauria brought up Chase Winovich, who is going to be one of the key guys for this team defensively moving forward if they’re going to be successful.

Coach was asked specifically how difficult it’s been for Winovich to adapt to playing off the line rather than on the line.

“I think Chase did. good job with it,” he said. “We asked him to do certain things. He was involved in some off the ball plays. I’d agree with (Bruschi), playing off the ball and on the ball are very different. There are some players can do both extremely well (like Hightower and Collins), but most other plays it’s more one or the other. You see the game quite differently…the skills are quite different that’s why there aren’t too many guys that can do both.

“There are some and for some it’s easier than others. Some guys adjust to it pretty easily or relatively smoothly and then there’s other players who are good at one or the other but not very good at one. It varies from player to player. I certainly admire the players who can do both.”

Merloni went back to the roster building criticism and asked coach if it bothers him at all. Surprisingly, Bill wasn’t his usual prickish self to Lou and answered it straight up, although he sort of avoided itinerary classic BB fashion  as well.

“At this point, there’s not a lot of decisions on that. You look at what’s available and you try to put the best people out there to try and beat Houston,” he said. “That’s what we’re going to try to do, that’s a full time job. The Texans have a lot of good players. They’re explosive on offense and have a very experienced defense.”

Merloni did his best to push it, saying “you’re answering questions that normally a GM would,”

“Yeah, I guess you’d have to ask those people asking those questions, I’m not sure,” Belichick mumbled.

It was soon time for the Mercedes Benz Question of the Week. Fauria asked Bill if there are any go-to meals that the coach could make, the answer may stun you.

“Well, first of all I let Linda do most of the cooking,” he said. “Being in the Covid situation this year she did most of the cooking and she did a great job. She really stepped up and put some great, healthy and creative meals on the table.

“But, if I had to put something together I’d go back to my old waitering days and have a Caesar salad, grilled steak and put together the crepe suzettes. I learned to do that at Middleton’s redsatarunt in Annapolis, we had to learn how to not set the customers on fire.”