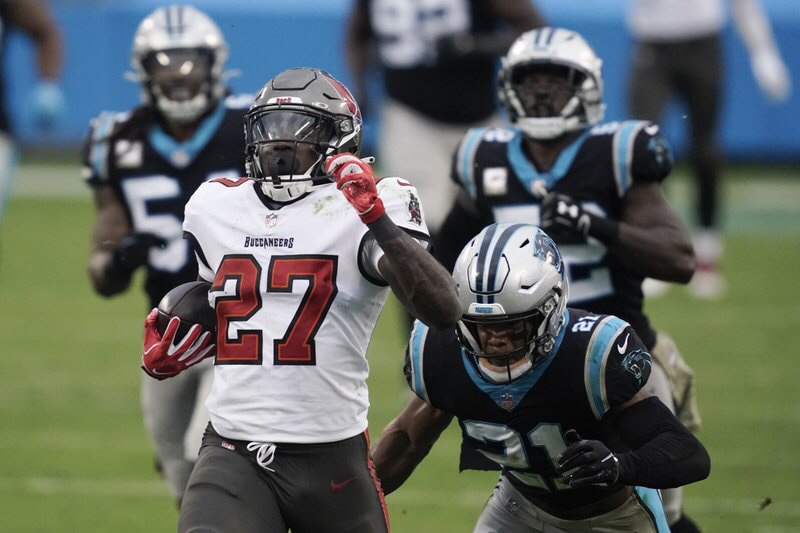 Another week, another win that wasn’t pretty for Brady and the Bucs.

As we’ve all learned over the years though, they don’t ask how, just how many. Right now, Brady and his Buccaneers are a seven-win team and just barely behind Green Bay (7-2) and New Orleans (7-2) for the top spot in the NFC playoff standings.

“We’re working hard at it to make it better every week and that’s what we’ve got to do.”

Once again – somewhat stunningly at this point – the Bucs fell in a 7-0 hole before Brady hit Cam Brate early to make it 7-7. The Panthers went back up 14-7, Ryan Succop hit a field goal to cut it to 14-10, Carolina pushed it back to 17-17 and Brady hit Mike Evans for a 3-yard TD with just 27 seconds left in the second to tie the game heading into halftime.

A Succop field goal gave Tampa its first lead at 20-17 five minutes into the third quarter. The biggest play of the game followed moments later when Ronald Jones ripped off a ridiculous 98-yard touchdown run to make it 26-17. Succop added another field goal late in the third to make it 29-17 after three.

“His ability to cut, make people miss [and] break tackles is outstanding,” head coach Bruce Arians said of the speedy running back. “It was just a matter of maturing as a back, slowing down [and] letting the game come to you instead of forcing everything.”

“I saw him get through there, make a cut on a safety and then at about the 50-yard line I was like, “is he going to make it?” said Brady. “He just kept going, the boys were hyped up and he broke away. That was fun, that was great to see.”

Yet another Succop field goal early in the fourth quarter pushed the lead to 32-17. Teddy Bridgewater punched in a 3-yard TD run with 11:23 to go in the game, cutting it to 32-23 after a failed 2-point conversion. Brady snuck in a 1-yard TD with 6:18 to go and then fittingly capped it off with old friend Rob Gronkowski, hitting him for a 7-yard TD for the 46-23 finish.

Brady finished the day 28-39 with 341 yards and three TD’s with no picks. Jones ended up with a ridiculous 192 yards on the ground on 23 carries. Meanwhile, Brady hit nine different receivers, including Chris Godwin for 92 yards (6 catches) and Evans (77 yards, 6 catches).

Seemingly all year the Bucs have played from behind in games, yet have usually found a way to rout teams in the second half like they did to the Panthers. The only times it hasn’t happened is oddly enough when Tampa has played in night games. Their next game is a gigantic matchup at home against the LA Rams and menacing force Aaron Donald on Monday Night Football.

So, Bruce, what needs to change?

“”We’ve got to try something because we’ve had really, really poor starts in night ballgames,” Arians said. “We’re going to try practicing at that game time [on] Friday and Saturday night [and] do some more stuff, actually, Monday morning than we’ve been doing. We’ve got to try something, so luckily we have an indoor facility and we can work at night. We’re going to do that and hopefully get a better result to start a ballgame at night.”